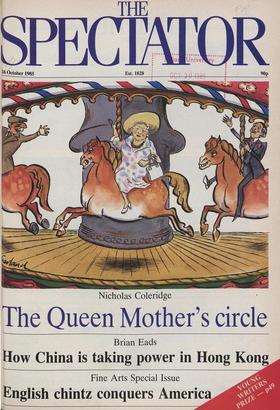 `Evening all!' C ommonwealth leaders meeting in the Bahamas agreed, with difficulty, a set of measures designed to force the South African government to end apartheid, but...

The problem remains that there are now not one but several PLOs, and that, as the failure of Britain's own recent initiatives has shown most vividly, it is difficult to find any...

IT IS somehow fitting that Samantha Fox, the 'page three' model with enormous breasts, is thinking of buying a house on the same estate as Mrs Thatcher in Dul- wich. Perhaps...

MR FOWLER WEAKENS I t is hard to escape the impression that Mr Norman Fowler, the Health and Social Services Secretary, is backtracking on some of his most radical social...

From Magdala to Southwark Crown Court FERDINAND MOUNT A ccording to its masthead, the Voice is 'Britain's Best Black Newspaper'. The front-page story in last week's edition...

A lmost every member of the British middle classes shares one common fantasy: the certainty of our competence to join the panel of Any Questions? Year after year, we sit at home...

Three women: the Princess of Wales, Tina Brown and Mrs Tomalin AUBERON WAUG H I was slightly shocked to see the Daily Mail's estimate that only 20 million people of Britain had...

Nicholas Coleridge on the surprising mixed company found in a royal sphere of influence IRANIAN emigres still revere Timur Khan Mir Panji, mother of the last Shah, as the...

THE SURRENDER OF HONG KONG

All the signs point to a war with Burmah. The Viceroy of India has prepared an ultimatum, which left Ran- goon for Mandalay on the 22nd inst., and which must be accepted or...

Timothy Garton Ash on Hungary's qualified tolerance of cultural freedoms Budapest 'TELL me,' says the famous Hungarian writer, 'what are the intellectuals talking about in...

Nicholas von Hoffman on Mr Murdoch's acquisition of some amazingly unprofitable television stations New York MANY a poor man has come to these shores, become an American and...

Zenga Longmore on the ways of gaining or losing friends in Africa AS A young black woman, travelling around southern Africa with my white stepbrother, I was chatted up from...

IS THERE A LAW OF CONSENT?

Alan Watkins argues that the Gillick judgment is hypocritical where the Victorians were clear EVERYONE who is interested in the history of journalism knows about W. T. Stead,...

CRYING OUT FOR REFORM

Paul Johnson argues that the Government needs more law to break the closed shop Street managements are still being led by the nose it is their own fault. On the other hand,...

Why monetarism is too simple for Mr Lawson JOCK BRUCE-GARDYNE T wo years ago, when Nigel Lawson returned in glory to the Treasury, I ven- tured (from another pulpit) to...

Spain is no longer content with Costa-mongering CHRISTOPHER FILDES Madrid o nceonce had a project called the Costa Inlanda. This started from the observation that Spain was...

In Peter Kemp's article last week on the International Brigades, an error in tran- scription led to the reading: 'when I transferred to the Spanish Foreign Legion I found the...

Set by Caroline Moore T he first three winners in the nine-week Spectator Game of Consequences will receive outstanding prizes. The first prize is a valuable 18th-century...

LETTERS Bourguiba and the Jews

Sir: Maybe it would be possible to add a few remarks to the excellent piece Rowlin- son Carter wrote from Tunis (`The survival of Arafat', 12 October): these relate to the...

Sir: Kingsley Amis's splendid catalogue of manifestations of 'Sod the public' (19 October) is one to which we all could add. I cannot help wondering if even you, Sir, sometimes...

Sir: Is Christopher Booker saying that as an Observer correspondent in Moscow I served Soviet interests? In his Diary of 21 September he hid behind quotation marks. Perhaps he...

Sir: I am sorry to see displayed on the front

of the Spectator, and repeated ad nauseam inside, the three-letter word as offensive to decency as any four-letter word or as its six-letter synonym. David Cairns Applecroft,...

Sir: I hesitate to disillusion Richard In- grams (Diary, 12 October), but Churchill tried the very volte-face he suggests over Ulster in 1940. The price of handing the six...

Sir: I am shocked by Mr Waugh's reference to vodka — 'the dullest and most brutish way of imbibing alcohol which mankind has yet invented' (Another voice, 5 Octo- ber). As he...

SUBSCRIBE TODAY! I would like to take out a subscription to The Spectator. I enclose my cheque for £ (Equivalents US& Eurocheques accepted) RATES: 12 Months 6 Months...

An awkward friend Colin Welch ORWELL: THE WAR COMMENTARIES edited by W.J.West Duckworth and the BBC, f14.95 I f recordings had been miraculously made of the Worcester County...

Anthony Storr STRINDBERG: A BIOGRAPHY by Michael Meyer Secker & Warburg, f25 M ichael Meyer is a man of the theatre, an outstanding translator of both Ibsen and Strindberg,...

The world in the afternoon

Pedro, the fisher of souls

Elizabeth Jennings THE LOST EMPIRE: THE STORY OF THE JESUITS IN ETHIOPIA by Philip Caraman Sidgwick & Jackson, £13.95 E thiopia is, of course, a potent word today; it...

John McEwen VINCENT BY HIMSELF edited by Bruce Bernard Orbis £25 (£30 in 1986) E veryone familiar with Bruce Ber- nard's Photodiscovery and The Bible and Its Painters knows...

`Shall I have any lasting reputation?'

Opera Don Carlos (Coliseum) Idomeneo and Carmen (Glyndebourne Touring Opera) Shock pleasure Rodney 114dnes I t is always a shock, but a most pleasant one, to see a great...

The Deliberate Death of a Polish Priest (Almeida) Turbulent priest Christopher Edwards I t is unlikely that General Jaruzelski, the atheist Polish head of government, ever...

Media darlings Alexander Chancellor I nsufficient credit seems to have been given to Miss Tina Brown, editor of Vanity Fair in New York, for the 'unique' televi sion interview...

The Aids syndrome Taki kay it's an ugly subject, but so many high-lifers are dying from it, I think it's about time I broke silence and said my bit about Aids. First of all...

Forms of torture Alice Thomas Ellis I think that in a previous existence I may have been subjected to some degree of interrogation because now when people ask me questions my...

Tired and emotional Jeffrey Bernard B ob Geldof came out with a classic last week. He said, 'I am suffering from_ com- passion fatigue.' I am not surprised. It is a fairly...

Communicating an itch P. J. Kavanagh I was once on an Any Questions? pro- gramme with Jeffrey Archer and have never forgotten it. We chatted together before- hand, amiably...

A handful of chintz James Knox 0 ne of the most dramatic rises in the art market over the last three years has been in the value of English furniture. This, like the demand for...

Echo Jaspistos I n Competition No. 1392 you were in- vited to write an 'Echo' poem in the form of question and answer, the answering echo being monosyllabic, disyllabic or...

Nimzowitschian Raymond Keene A Moscow s he indicated to me last week, Gary Kasparov believes his Taimanov Sicilian Gambit to be sound. He demonstrated his faith by using it...

THEY started at Watford North: three personalities, on the car radio, Woman's Hour, going on about dinner parties. They talked frothily for 13 minutes without once mentioning...

`Battered into almost total paralysis by the aggressive challenger' was how the Times chess correspondent described Karpov during one of his current games against Kasparov. You...

Solution to Crossword 728; Not half simple