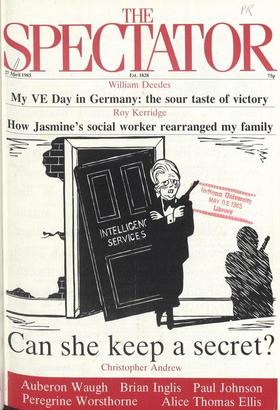 'A rather nasty accident! A group of expelled Russian officials crashed into a crowd of British expelled officials!' A s school holidays ended, the teachers' strike resumed,...

VE DAY: NEW ENEMIES AND NEW FRIENDS T here are two major problems with the 40 th anniversary of VE Day. One is our former enemy and the other is our former ally. Our former...

E FOUNDERS of the Employment r astitute and its 'Charter for Jobs' compare t h emselves with the Anti-Corn Law vague, which took seven years to achieve 1.. 'S objective, in...

THOSE WHO read Nicholas Ashford's 'Bicentenary' interview with President Reagan in the Times recently may have been surprised by the unusual articulacy of the President's...

This week the Spectator introduces a num- ber of design

changes in the front half of the paper. These will be followed over the next few weeks by changes in the back half. The inclusion of a full page of contents and the Portrait of...

Can Labour shuffle or goosestep to victory? CHARLES MOORE M r Michael Meacher, Labour's spokesman on social security, was always described as 'hard Left' before he joined the...

Several MPs have recently told me that the complaint they hear from constituents most often at the moment is that Mrs Thatcher now gives herself royal airs. Apparently it was...

British attitudes to the Soviet Union really are a bit odd, if Brian Redhead of the BBC's Today programme is anything to go by. For on the morning after the announce- ment that...

A top libel lawyer friend warns me to wa tch my words this week. Such is the Pu blicDlic outrage against the media over the Pu blic .rincess Michael affair that judges and...

I thought Paul Johnson's recent strictures on gossip columnists (The press, 20 April) rather over-simplified the problem. According to him, newspapers ought to confine...

GUARANTEE YOUR COPY OF

THE SPECTATOR EVERY WEEK SUBSCRIBE TODAY! Please enter a subscription to The Spectator. I enclose my cheque for Â£ (Equivalent US$ & Eurocheques accepted) RATES: 12 Months...

On first reading the Thirty-Nine Articles of Religion AUBERON WAUGH S ince 1865, Church of England clergy have not been required to affirm their acceptance of the Thirty-Nine...

THE INTELLIGENCE SERVICES Christopher Andrew explains how the Government, obsessed

by security, is now its own worst security risk WHO SHOULD GUARD OUR SECRETS? l 'HE SIX YEARS of Thatcher govern- ment have seen the progressive crumbling of one of the most...

the reasoning behind Reagan's hostility to Nicaragua SELF-DEFENCE OR MORAL DUTY? Washington THIS HAS not been a week for the observance of fine distinctions. First we were...

the reality behind the Mugabe government's rhetoric WORDS AND THE REVOLUTION Harare IF YOU live in a newly independent country there is no doubt about the right business to be...

own less than euphoric reactions WHEN PEACE BROKE OUT THERE is a certain difficulty about celeb- rating the 40th anniversary of VE Day which may well have entered sensitive...

time we treated the Nazi epoch as history BEING BEASTLY TO THE GERMANS THE BEHAVIOUR of the press and the Daily Mirror in particular towards Princess Michael of Kent raises a...

WORKERS' co-operative â is that another of those expressions which mean their opposite? It"does not have to be. It is a misfortune that the idea has been tar- nished â...

'THIS LLOYD'S lark,' grumbles a friend `is not all it is cracked up to be. Look at me, ordinary chap, name at Lloyd's, my father introduced me, don't understand it much,...

Forward with the people, but don't call them that CHRISTOPHER FILDES N ot wanted: a people's capitalism. The Prime Minister believes that the notion is admirable, but that the...

Enthusiasts for exchange rate control JOCK BRUCE-GARDYNE A fortnight ago I spent a strenuous weekend attending one of those learned seminars at which assorted transatlantic...

On Thursday morning, at 10.45 a.m., a room in the Admiralty, occupied by the Asistant Secretary, Mr. E. W. Swain- son, was blown up from the inside. Mr Swainson sustained a...

Sir: Charles Glass writes evocatively about Lebanon (`Lebanon's ten years', 13 April). He has an impressive knowledge of the country, based, no doubt, on much reading as well as...

Sir: Your American reader, Mr Lydon, writes (Letters, 13 April) requesting you to annoy me again. This you had, as it happened, already succeeded in doing by committing on the...

Sir: I always read Paul Johnson's contribu- tions with great interest and I agree with much of what he writes in his articles on 'A Media church?' (6 April). When he con-...

Sir: Charles Moore is mistaken if he thinks that Dr David Owen would ever be accept- able to the grass-roots of the Tory Party (Politics, 13 April). As in the old quip, he has...

Sir: A word dropped from my piece on the last days of Saigon last week (20 April) needs reinstating. Larry Burrows, the British-born Life photographer, was not just 'in Laos' in...

Sir: Your Note about PSA (6 April) will surprise few familiar with this organisation. On the military bases I have served on, it was known after the more celebrated initials of...

Whisky and socialism: good and bad drugs COLIN WELCH F ar more people dismiss the modern New Statesman as unreadable than ever, I fancy, venture into its grim-looking pages....

The Lear of Vichy Allan Massie Main: Hero or Traitor? Herbert R.Lottman (Viking Â£16.95) DMain's story is the closest to Eli- I zabethan tragedy produced by the second world...

How to ruin pictures

The war that never ended

Epitaph on a Horse

You ran through my money, if ran be the word, And now 'neath this turf you are safely interred. In Elysian Fields you now practise your tricks What a change it must be to get...

To be or not

Cobb's school for scandal Brian Inglis F or some reason I cannot recall, I pegged my contribution to John Bull's Schooldays, a sporadic series which ran in the Spectator from...

Personality changes Christopher Edwards Hamlet (RSC, Barbican) Gertrude Stein and a Companion (Hampstead) rr his is a much improved production of 1 the RSC's Hamlet which has...

On the counter Charles Campbell I put on my grey pinstripe suit, discreet lfloral tie and with a touch of bohemian in the sock I am off to Christie's to blend in with the...

Production line Rodney Milnes Don Carlos and Lucia di Lammermoor (Covent Garden) T here can be no doubt that the operatic talking point of the day is production. In bars and...

Losers Peter Ackroyd T he credits tell us that the film is `based on actual events', which can mean anything or nothing. And in any case real events have been an excuse for...

Funny voices Noel. Malcolm w riting about Enver Hoxha last month showed what turned out to be a rather unnerving prescience on my part, so this time I thought I would say a...

Open to the elements Ursula Buchan A s the weather turns, and sporadically ..improves, commuters on station plat- forms may occasionally be seen digging out imaginary yorkers...

All talk Peter Levi ometimes I listen dreamily to a chat Oshow, but it melts in the mind, leaving no after-taste. The ideal interviewer is Terry Wogan, and why not? He is just...

Morality Taki New York F inding the Spectator in the Big Apple is at times as hard a task as discovering the truth about Princess Michael's father's past. Thus, two weeks...

Jeffrey Bernard is recuperating in Spain.

Cut short Alice Thomas Ellis T he telephone in the country was what is politely known as temporarily discon- nected and, even after we had rectified the omission, remained...

Lean times P. J. Kavanagh S pring has been arriving incognito this year, in dark and wind. So instead of observing what is nearly invisible I have been thinking about David...

Jaspistos reports: Competitors were asked for a poem in praise of an ugly piece of modern machinery in the `Macspaunday' manner of the Thirties. I suppose Spender's notorious...

No. 1369: The Hidden One Set by Jaspistos: You are invited to pro- duce a plausible passage of prose which contains the following words in any order and which might possibly...

Mo sooner is it British Summertime, 1 1 than Harold Stephenson holds his first dinner party with drinks 'outside'. I don't mind the rain too much but I do not enjoy sitting in...

There is now a charge of Â£1 per insertion (max. 2 books). Cheques made payable to The Specta- tor. Please send details to Books Wanted, The Spectator, 56 Doughty Street, London...