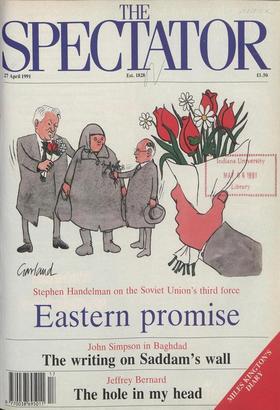 A new system of local rates, to be known as a council tax, was announced, replacing the poll tax and based on proper- ty values, with a discount for those living alone....

W hen I tell people that I have just come back from two weeks in South Africa, they seem either to be shocked or look jealous, nothing in between. I mollify the shocked ones by...

How modern painters can still save the world AUBERON WAUGH L ast week's Montblanc Literary Gala dinner of the PEN American Center, held in the 19th-century splendour of the US...

Stephen Handelman reports on the rise of Kazakhstan's president in what some now call the post-Gorbachev era Alma Ata THERE is ordinarily very little to attract a traveller to...

THE WRITING ON THE WALL

John Simpson finds that conflict has wrecked the Saddam mythology Baghdad A PACK of yellow dogs rooting through the nearby graveyard paused to bark at me. Seagulls clattered...

Charles Glass finds the cruelty of Iran's leaders alongside the kindness of its citizens The religion of God is more shameful than unbelief, because the mullah is a believer...

LORD SALISBURY held that the next General Election would not finally set- tle the Hothe-rule Question. If, as he expected, the Conservatives carried the day, he looked forward...

THE STENCH OF THE FRENCH

Robert Cottrell unravels the web of corruption at the heart of French political life Paris FRANCE grows a little more like the American west each day, as lone judges and...

AFFRAY IN THE CHANNEL

TURNING DOWN THE BEETLES

persist . . BECAUSE we no longer cover up the legs of pianos, we think we have been liberated from Victorian humbug; but like the poor, euphemisms are with us always. That is...

SIXTY PER CENT OF NOTHING

Michael Lewis says that he will leave Britain the day Labour is elected LIKE most people I am able to recall precisely where I was when I first heard important news. I was...

A reader noticed this article in Bill- board: The '80s and the first year of the new decade saw a consolidation in the music industry that resulted in the emergence of a handful...

bloody abroad more edifying than home sweet home HOW depressing to return from abroad to the provincial triviality of our media! The newspapers seem obsessed with worthless...

WE MUST think next about doubling up on one or both of two big future events, the Barclays Handicap, and â the ultimate City classic â the Threadneedle. Sir Peter is coming...

Home loans â yes, it's good news, but not for the customers CHRISTOPHER FILDES S pring is sprung, interest rates are coming down, and even the building societies are...

MARGARET Thatcher would have liked to install Sir Peter Middleton as Governor of the Bank of England. The opportunity never quite presented itself â nor am I clear that Sir...

An oeuf is an oeuf

JACQUES Attali, the hero of my knock- knock headline (Attali who? Attali and completely over the top), likes to do things in style â his own style, that is. At the Berd, which...

PILE it high, sell it cheap, was the rule that Jack Cohen laid down at Tesco. His successor, Sir Ian MacLaurin, piles his salary high and sells himself dearly â at the absurd...

Sir: A. N. Wilson, an arts man, supports the notion

(Diary, 20 April) that scientists are half-men; but his facile approach to basic economics suggests he would in fact need far more than a fortnight to 'get up' simple...

Getting up their noses

Sir: Your journal does make a mess of discussing science. A. N. Wilson's claim (Diary, 20 April) that scientists have left it too late to master poetry raised a joyous chortle:...

Sir: I was deeply shocked to see in your issue of 20 April that you had chosen to print, under the bizarre heading 'Ala, alas' (I have at no time in my 73 years been called Ala...

Sir: As a loyal member of the Church of England â Catholic and Reformed â I regret that Dr Oddie (`The trouble with Poping', 30 March) was not able to re- spond to his...

Feeding on the corpses Sir: Michael Lewis's article (`The revenge of the wimps', 20 April) is long overdue. As a lapsed chartered accountant (I have been a publisher for the...

Sir: The piece this week by Michael Lewis on profiteering

receivers is well-timed and accurate. However, there is a further point than the excessive charges levied by receiv- ers and approved by banks. It is that they do a poor job. I...

Sir: You ran an article about the 'prurient obsession of the British press' by Vicki Woods (6 April). She included the quality press in her remarks, particularly the Inde-...

Sir: I don't want to quarrel with Sir James Craig, whom I greatly admire. He says in his letter (20 April) that I misquoted him, not grossly. I've looked again at my notes of...

The best of bras

Sir: An admirable feature of Leo Klin's Kestos bra (The Homeric brassiere', 13 April) that I have never encountered in other makes was that the waistband cros- sed at the back...

Sir: Robin Holloway confesses that he walked out half-way through the first performance of 23-year-old Frederick Stocken's oratorio `The Cathedral' (23 March). Strangely what he...

The wife and times of Ceausescu

Florin Bican T he synchronous perception of history can be dismissed as a contradiction in terms, history being sequential par excel- lence. Not so by the inhabitants of...

Is the Bible a woman's joke?

J.Enoch Powell THE BOOK OF J translated from the Hebrew by David Rosenberg, T he German critics of the 19th century, and foremost and best known among them Julius Wellhausen...

A Socialist gets the nod

Stan Gebler Davies CANDIDATE: THE TRUTH BEHIND THE PRESIDENTIAL CAMPAIGN by Emily O'Reilly Attic Press, Dublin, LIR 6.99, pp.160 T he Presidential campaign referred to is the...

Richard West THE WILDER SHORES OF MARX: JOURNEYS IN A VANISHING WORLD by Anthony Daniels Hutchinson, Â£16.99, pp.202 R egular readers of The Spectator need no introduction to...

`Good neighbour Michael Drayton, and you, Old Ben Stepped up from London to our Warwickshire The air is balmy, so we'll drink tonight Under my mulberry tree, and hear the...

Francis King THE REDUNDANCY OF COURAGE by Timothy Mo Chatto & Windus, Â£13.99, pp. 408 T he setting of this novel is the eastern half of an island to the north of Australia....

Mark Archer AMERICAN PSYCHO by Bret Easton Ellis Picador, Â£6.99, pp. 399 B ret Ellis is the despair-and-alienation king of contemporary American fiction. He is also a...

A casualty of gorilla warfare

Brian Masters THE DARK ROMANCE OF DIAN FOSSEY by Harold Hayes Chatto & Windus, Â£16.99, pp.242 A nyone who has been in close collo- quy with a gorilla knows it to be a...

Not in control of their power steering

Piers Paul Read THE TRUTH ABOUT CHERNOBYL by Grigori Medvedev, translated from the Russian by Evelyn Rossiter, with a foreword by Andrei Sakharov I.B. Tauris, Â£14.95, pp.286...

The golden age of Glock Robin Holloway A reaction to his newly published memoir (Notes in Advance, OUP, Â£20) shows, the name William Glock still sets off alarms in some...

Henry IV Part I (Stratford) In the Native State (BBC Radio 3, 21 April) Falstaff s darker side Christopher Edwards B etween them the director Adrian Noble and the actor...

Hamlet (`U', Odeon Haymarket) Unmelancholy Dane Gabriele Annan A t school we were made to read J. Dover Wilson's What Happens in Hamlet. It made us see that Hamlet is a...

recommended by The Spectator's regular critics OPERA King Priam, Grand Theatre, Leeds (0532 459351), from 3 May. Tippett's most austere and compelling opera is presented by...

Sundays in Arcadia Ian Hislop G ussie Fink-Nottle was out for a gold- en duck on Sunday. So was Cedric Charl- ton. In each case the unsuccessful batsman came off the field to...

When Harry met Stalin Taki `You spoil that lemming.' cousins known as the first world war had slipped my mind. Needless to say, for a Greek not to give credit to Harry Truman...

Marlyn Harris will be back next week.

Save the pigeons Zenga Longmore T he other day, I bought Omalara one of those baby books which depict inani- mate objects in bright colours. You know the type of book I mean....

Like a hole in the head Jeffrey Bernard I have written before about my most recent head injury but forgive me for repeating myself. I can think of little else. For the past...

we ' ve had brill, we ' ve had just about everything. So what, ' asked Loyd Grossman of guest - star - chef Alastair Little on the first of the new series of Masterchef last...

A first prize of Â£20 and two further prizes of Â£10 (or, for UK solvers, a copy of Chambers English Dictionary â ring the word `Dictionary') for the first three correct...

You are a reviewer who has been given 150 words in which to write about two books on wildly different subjects, at the same time being told by the editor to find as many...

Cornish pride Frank Keating SOD the overseas tourists, it is the English provinces that have been laying siege to London. Even today's raucous invasion of tens of thousands of...