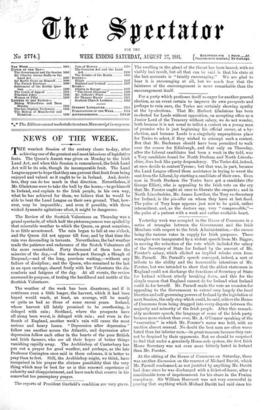 At the sitting of the House of Commons on Saturday,

there was another discussion on the rearrest of Michael Davitt, which Mr. Parnell condemned, as not justified by anything Mr. Davitt had done since he was discharged with a...

For a party which professes itself so eager for another

general election, as an event certain to improve its own prospects and perhaps to ruin ours, the Tories are certainly showing apathy at the by-elections. That Mr. Herbert...

The reports of President Garfield's condition are very grave. The

swelling in the gland of the throat has been lanced, with no visibly bad result, but all that can be said is that his state at the last accounts is "faintly encouraging." We are...

T HE weariest Session of the century closes to-day, after achieving one of the greatest and most laborious of legislative feats. The Queen's Assent was given on Monday to the...

Yesterday week was occupied in the House of Commons in

a series of wrangles between the Government and the Irish Members with respect to the Irish Administration,—the excuse being the various votes in supply for Irish purposes....

The weather of the week has been disastrous, and if

it continues even a little longer, the harvest, which it had been hoped would reach, at least, an average, will be nearly or quite as bad as those of some recent years. Ireland,...

The Review of the Scottish Volunteers on Thursday was a

grand spectacle, of which half the picturesqueness was spoiled by that miserable weather to which the Queen, on great occasions, is so little accustomed. The rain began to fall...

The Editors cannot undertake to return Manuscript in any case.

Mr. Dillon, M.P., has made his first speech since his

release, and a very savage speech it is. He makes light of his own im- prisonment, during which he admits that he was very well treated, but he magnified the sufferings of...

We do not think that the Irish Government have made

out a very good case for retaining Mr. Herbert, of Kerry, in the magistracy for Kerry, after the admitted use by him of violent language against the people, for whom he is said...

In the Spanish and Portuguese elections, the Ministry of the

day have secured a no less great or even greater Ministerial majority than the French Ministry has secured in the French Chamber. In Spain, there are 301 Ministerialists...

M. Tirard and the French Department of Commerce have fidgeted

greatly over Lord Granville's and Sir Charles Dike's statements as to the Commercial Treaty between France and England, and the cause of the rupture of the negotiations. They...

M. Gambetta obtained his seat in the first division of

the Belleville District, and was also highest on the poll in the second division, bat did not there gain his seat, as he did not poll a sufficient number of votes to secure his...

Lord Hartington's Indian Budget on Monday was chiefly remarkable for

its exposure of the wild under-estimate of the cost of the Afghan war. The total war expenditure (including the frontier railways) is no less than £23,412,000, of which...

As regards the Indian expenditure of 1879-80, the latest year

Mr. Ashmead-Bartlett could not bear to suppress his great speech

on Foreign Affairs, so he chose the Appro- priation Bill on Tuesday night for his opportunity, and stoically endured the absence of any sympathetic Tory audience, which was...

After a tirade to this effect, which lasted an hour

and a half, Mr. Gladstone got up in his happiest mood, remarking that in relation to issues of fact, everything that Mr. Ashmead-Bartlett asserted, he (Mr. Gladstone) denied ;...

The Medical profession have been encouraged, by the advent of

their Continental brethren, to say all the hard things which their hearts have long been meditating concerning the Vivisec- tion Act ; and in the last Lancet there are two very...

Lord Hartington gave a satisfactory reply on Monday to Mr.

Onslow's question whether the Viceroy wished to grant fresh supplies to Abdul Rahman, or whether, if the Viceroy had not made any such application, the Home Government would...

The Government suffered a funny little defeat on Saturday in

a very thin House of little over eighty. The Attorney-General moved for a Commission to inquire into the Judges' allegation that corrupt practices extensively prevail at Wigan....

THE GOVERNMENT AND THE SESSION. p ARLIAMENT will be prorogued to-day, and a Session ended at once remarkable and grotesque, notable for its tumultuous dreariness and its...

T HE Irish Land Act of 1881 has received the Royal Assent, and on the same day on which this happened there appeared in the Freeman's Journal a letter to Canon Doyle from Sir...

SIR BARTLE FRERE ON HIMSELF.

S IR BARTLE FRERE is, perhaps, the most conspicuous living example of the class of men who will deliberately conceive and carry out an iniquitous policy, thinking all the while...

THE FRENCH ELECTIONS. T HE great feature of the new French

Elections is, as might have been expected, the loss of political influence by the Bonapartists. This is, of course, the natural result of the death of Prince Louis Napoleon. The...

THE SETTLEMENT OF THE KULDJA QUESTION.

T HE dispute between Russia and China, which at one time threatened to involve the whole of Northern Asia in a war of which it was impossible to see the end, has at last been...

THE COURT OF APPEAL. for the work which the two

A T Southwark, last Saturday, three apprentices in the Globe Boiler Works were brought before Mr. Slade, charged with assaulting and injuring a fellow-apprentice, so that he had...

W ITH the best intentions, much harm may be done. This oracular and far-reaching remark shall, for the pur- pose of the moment, be applied to an essay, or series of essays...

BISHOP WILBERFORCE AND DEAN STANLEY. [TO THE EDITOR OF THE " SPECTATOR:1 Sra,—I see Mr. Wilberforce is asking for authentic anecdotes. of his father, the Bishop. And your...

THE BISHOP OF MANCHESTER AND RITUALISM.

[TO THE EDITOR OF THE " SPECTATOR."] SIH, — The Bishop of Manchester, as you most fitly reminded us last week, avers that he is almost " losing patience and hope at the...

[To THE EDITOR OF THE "SPECTATOR. "] SIR,—In several of the late notices of E. J. Trelawney it was assumed that he was the last of the group of friends who were the companions...

THE COERCION ACT AND THE LAND ACT.

[To THE EDITOR OF THE "SPECTATOR. "] Su,—The question how Mr. Gladstone's new Land Act will work in the long-run may be safely left to time to solve. The interesting question at...

[To THE EDITOR OF THE " SPECTATOR."] SIR, —Having just read with delight and edification the account of a Martin," in your issue of to-day—an account worthy of a place in that...

SIR,—During six weeks which I spent at the Diablerets, in Switzerland, several years ago, I had the pleasure of making acquaintance with a very remarkable cat. His mistress, a...

THE ESTATES OF THE REALM.

SIBERIA IN EUROPE.* MR. SEEBOHH is a naturalist, and for ornithology his enthusiasm knows no bounds. This volume affords a singular illustration of the buoyancy of spirit and...

ELIJAH. "Elijah went up by a whirlwind into Heaven." — II. Kings ii., 11. So passed the prophet, rapt from mortal eyes, And saw not death : to what serener air, What nobler...

I . "DARE, haggard Spectres, lurking to betray The innocent to death, to murder trust, To gloat o'er ancient grandeur in the dust, Who from your native Hell bath ope'd your...

THIS little book ' draws an effective and very striking con- trast between the Christian view of Christ, and all the vari- ous rationalistic views which explain away...

are better than those in his first. They retain some of Mr. Gilbert's characteristic defects, touches of frivolity too frivolous even to be funny, touches of impropriety less...

AMONG Governors of Madras, the author of these minutes and other official writings, which Sir Alexander Arbuthnot has collected with religious care and edited with no ordinary...

IT has been hinted recently that Presbyterianism is not making the progress that it ought to make, even on its own chosen soil. The Scottish Churches, from their attitude of...

SCHOOL BOOKS. A Series of First Lessons in Greek : adapted to Goodwin's Greek Grammar. By J. W. White, Ph.D. (Macmillan.)—It is high praise to say that this book is a worthy...

On a subject which may be taken to be pretty

well threshed out for the present, we have Certainties of the Soul and Speculations of Science, by the Rev. Joseph Cook (Ward, Lock, and Co.), and Beneath the Surface, by Edward...

The Future Marquis. By Catherine Childar. (Hurst and Blackett.) —This

is a readable story, having a certain vivacity and briskness about it which carry one on through the three well-filled volumes. If we are to look at it critically, however, we...