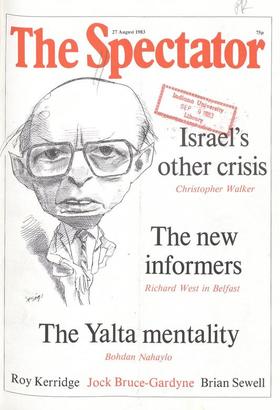 T he United States appears to be much more eager for France to adopt a heroic posture in Chad than France is itself. Doubtless President Mitterrand would be happy to enjoy the...

Aquestion of attitude Charles Moore I do not envy Lady Glover. At consider- ..I. able inconvenience, she puts her lakeside castle at the disposal of the British Prime Minister...

T he Aldeburgh Festival took place in June this year, as usual, at the delightful Snape Maltings. Concerts, and music classes, have been held there t hroughout the summer; but...

Jerusalem W hen the increasingly frail-looking Prime Minister of Israel steps out of his modest official residence in Balfour Street every morning, he is met by the...

Bohdan Nahaylo F or some time now unmistakable cracks have been appearing in the system Which has brought peace and insecurity to One half of Europe and oppression and rigidity...

A bit of a myth

A. M. Daniels Tarawa, Kiribati O f all the British colonial possessions the Gilbert Islands, an archipelago of tiny atolls in the Pacific, were perhaps the most benignly...

The Comte de Chambord died yester- day, at the age of sixty:three. He had been a Pretender all his life, and yet never a Pretender at all in the English ac- ceptation of the...

Richard West Belfast T he good place to eat in Belfast these days is a Pakistani restaurant called the Moghul. Or so we were told. But arriving there with a friend not long...

Roy Kerridge ' ure it's great to see you,' says Hogan the park keeper from County Mayo, a mischievously genial expression on his rug- ged face. Hogan arrived in England in...

The tale of Anne Killigrew

Brian Sewell V an Dyck's portrait of Anne Killigrew is now in America. Painted in the late 16 30s, it passed after the Civil War into the c ollection of Sir Peter Lely, Van...

Of ADRs and roll-ups Jock Bruce-Gardyne t is a truth universally acknowledged It a taxman confronted by enterprise must be in want of a rule to stifle it. Or so the current...

A babel of voices Paul Johnson ooked at with the clinical eye of a news 1--deditor, it has not been a bad August: wars in Central America and Africa; the Middle East bubbling...

Spending and the ILEA Sir: Poor Charles Moore (13 August). He really is terribly confused about who does what in local government and how well they do it. He criticises, for...

How low can you get?

Sir: Presumably some of your readers are entertained by the blend of self-advertising alcoholism with puerile racial abuse which fills Jeffrey Bernard's Low life column. But one...

Sir: I sympathise with Simon Courtauld over the spelling of the Libyan leader (Notebook, 20 August). It is true that the initial consonants of the Libyan and Iranian leaders are...

Sir: Your correspondent Patrick Marnham, in an article on Guatemala (13 August), states, 'At least under Rios Montt many fewer Indians were killed'. In fact, under the...

Sir: May I make a brief rejoinder to John Sweeney's China article (30 July)? The first foreigners to penetrate Tibet were not in fact Indian spies from the British Raj in the...

The price of Dr Johnson

Sir: Your reviewer's unexceptionable survey (30 July) of Dr Johnson as a lexicographer was marred in the ultimate paragraph by his evident ignorance of book production. The...

Sir: Maureen Owen's assertion that the BBC fails `to produce anything of use on the subject of unemployment' and her condemnation of BBC Local Radio on that score (6 August) is...

Sir: It may interest you to know that the phonetical

transliteration of the Spectator into Arabic would, transliterated back into English, be the Sbactator, Sir Peter Parker would become Sir Better Barker, Len Murray would become...

Sir: 1 feel that Richard West's reference in his article 'France's old friend' (13 August) to 'Churchill's catastrophic decision to shell and sink the Vichy fleet at...

Bats in the Bell-Fry Richard Shone Vanessa Bell Frances Spalding (Weidenfeld & Nicolson £12.95) T he last time Vanessa Bell was written about to any purpose in this paper was...

John Joiliffe ven without a heatwave, but this year E more than ever, August is the time W . hen most gardens, however well tended or illegally watered, begin to look jaded...

The voice that breathed o'er Auden

Not Polish Proms Peter Phillips I t's a pity to pretend that the Proms is an international festival — in the way tha t ' for instance, Edinburgh is. It is so large that it can...

Masquerade J ohn McEwen Masquerade (Museum of London till 2 October) A ugust must be just about the least fanciful month of the year, so it is a particularly good time to...

Tired of life Richard Ingrams I have been taken to task in the pages of the Times by the distinguished and witty Moreover columnist Miles Kington who ac- cuses me, quite...

Persecuted Taki T called my American lawyer the other day I ask what had become of the six-mink: l- dollar libel suit the husband of Model turn' ed minor starlet, Marisa...

In a pickle Jeffrey Bernard I r ead that a member of the General Medical Council has called on his col- l eagues for quicker identification and treat- ' n eat for alcoholic...

The hero P. J. Kavanagh I saw something so extraordinary the other day that 1 hope not too many people will switch off because it happened at a cricket match. Middlesex were...

A prize of ten pounds will be awarded for the first correct solution opened on 12 September. Entries to: Crossword 622, The Spec- tator, 56 Doughty Street, London WCIN 2LL. 1...

No. 1284: Birds in hiding Set by Jaspisros: You are invited to write 3 piece of plausible and entertaining prose (maximum 150 words) in which the name of 15 birds are hidden....

Report by Jaspistos: Competitors were asked for an extract from the pre - war memoirs of a precocious teenage aesthete, of either sex, at a public or boarding school. ternher....

Enormous Raymond Keene M any congratulations to Jonathan Mestel, who took his second national title in the Grieveson Grant British Cham- pionship at Southport with 81/2/11....

T he Labour Party was reported to have been infiltrated by 1,000 'moles', or Trotskyite subversives, who were behind the recent attempt to take over union activities in the...