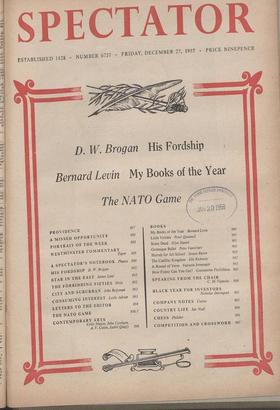 0 F all the qualities which distinguish our civilisation from a fully Christian civilisation, none is more striking than the almost total absence today of faith in the earthly...

Portrait of the Week THE meeting of NATO Heads of

Government in Paris ended, as it began, with a great many colourless generalities. It was possible, however, to gather from the vast length of the final communiqué that a...

T HE issues raised by the NATO meeting in -Paris have by now become so complex that it is hard to bring any sense into the confusion. There are two opposed, but complementary...

PETER WILES A survey of The BBC's Russian Service LORD ATTLEE on Churchill, Roosevelt and Stalin

AND, mark you, I went there with the best of intentions — even though all that drivel in Paris had kept the Prime Minister and Foreign Secretary away so long that the debate had...

DECEMBER 29, 1832 WE have received, from Sydney, a Synopsis of Latin Grammar, in one sheet. Think of that, gentle reader,--- a Latin Accidence from Botany Bay! (We wish it had...

confident, authoritative, showing no trace of his hesitancy of the past.—'A Student of Politics,' Sunday Times.

MR. GEORGE BROWN gratuitously gave the game away on television

the other night, when he was asked about differences in the Labour Party over foreign policy. His reply was to say, in effect, that, the party leaders had taken darn good care...

A tired performance, this, everybody thought. —The Times. Mr. Lloyd made a hash of it again.—Sunday Dispatch. *

OTHER NEWSPAPERS and periodicals have been awarding their accolade to

the men, women, children, dogs, films, and starlets of 1957; as a last-minute addition, I would like to announce my own prize for the silly ass of the year. It goes...

THE FOREIGN OFFICE'S scheme to get the Allies to favour a settlement of the Palestine problem on the basis of Israel's 1947 frontiers—i.e., the boundaries laid down by the UN...

By D. W. BROGAN A MONO the stars that 4n, paled when Sputnik rose in the fore- head of the morning sky Was the American star that had been long lord of the ascendant, the...

Star in the East

By JAMES LUNT O NE Christmas Eve, not many years since, I was camping out in the desert beyond Jor- dan when it suddenly struck me that I was in the wrong place for the time and...

By STRIX T HAVE a distrust of labels. I When I was young the vogue for them, though vestigial by modern standards, was not to be ignored. The age-group, the income-bracket,...

S OME months ago I offered a list of recom- mended London restaurants to any Spectator reader who would like one. The list was really in tended for people who live in the...

By JOHN BETJEMAN It seems almost incredible that the town coun- cil of so glorious a city as this should deliberately plan to murder its greatest asset as it is going to do on...

SIR,—Columbia Market, that impossible coil of old iron, sooty stonework and misshapen pin' must be retained. Why? No coster would flog bage beneath its battered portals and the...

SIR,—I apologise. Sloppy handwriting (unless I a slip of the pen) caused the misquotation 'clese for 'discretion' in my letter as printed. Mr. Power makes the point that...

KIDNAPPING BLAKE SIR,—Mr. Robson wishes to continue to quibble. The

reference to' the Northern Gate in The Book of Thel is continued in the line The Eternal babes' terrific power lifted the northern bar. What did he lift if not the gate? The...

Sik,—You complain in an aside, in this week's Si tor,

that an important question of ours was 'an We deny completely this serious charge. Perhaps, however, you will be good enoul elaborate and substantiate your accusation.-1...

SIR, —May I say a word in defence of Kathleen

Raine's study of four of Blake's poems, which met with such severe strictures from your reviewer? There is really no question of Miss Raine's trying to 'kidnap' Blake! His work...

SIR,—Six Fellows of St. John's College really ought to be more careful. The titles and sub-titles of Voltaire's Philosophical Talcs are, rightly or wrongly, rather more widely...

Sia,—Mr. James Cameron, who reviews Soviet Russia in China: A Summing Up at Seventy, by Chiang Kai-shek, describes the Generalissimo as remote, obstinate, courageous, misled and...

HUNGARY Sit,—In 'A Spectator's Notebook' for November 15 you ridicule

what I broadcast over Budapest Radio by saying that the Dean of Canterbury's statement seems 'almost decent by comparison.' Mine therefore must be quite indecent by your...

The Year on Television

WHATEVER the audience figures may show, this has been the BBC's year on television. The commercial people are still followers and perhaps always will be until the regional...

The Year's Music OPERAS by Schoenberg and Hinde- mith, and ballets by Britten and Stravinsky, have been the great new musical experiences of the year. Schoenberg's Moses and...

THIS is list-time, so here I go : from the flurry of urgent seasonal lists scribbled on the backs of envelopes (what to buy, cook, give, post, remember, forget, and so on), my...

THE year 1957 has been about as full of activity in the dance field as any other postwar 'year; plenty of foreign dance companies—but no leading foreign ballet company— have...

MY BOOKS OF THE YEAR

By BERNARD LEVIN I SUPPOSE the outstanding factor in the world of books during 1957 was the remarkable unity of theme that ran through so many of the works published during the...

Poor Monkey: The Child in Literature. By Peter Coveney. (Rockliff, 30s.) MANY of the changes we regard as character- istic of nineteenth-century social life had already begun to...

The Living Past. By Ivar Lissner. (Cape, 42s.) 'LIFE is so short,' says the author of this well- illustrated, well-produced but unfortunate book, 'that we should make the most...

The Bombs of Orsini. By Michael St. John Packe. (Seeker and Warburg, 25s.) THE Carbonari, the most notable of the secret societies which maintained the idea of Italian...

A Round of Verse

The Wells of Ibn Sa'ud. By D. van der Meulen. (John Murray, 25s.) THE author of this shrewd, intelligent book is a former Dutch Minister to Sa'udi Arabia, a trained Orientalist...

Golden Sections. By Michael Ayrton. (Methuen, 25s.) ?ARLO PtcAsso,' one can almost hear Mr. Ayrton saying, 'Pablo Picasso is a clever boy and has won many prizes this term....

How Funny Can You Get ?

Aspects of English History. By Claud Cockburn. (MacGibbon and Kee, 15s.) The Pick of Punch. Edited by Nicolas Bentley. (Andre Deutsch, 18s.) How Can You Bear To Be Human? By...

By NICHOLAS DAVENPORT IT was a very clever investor who made a profit on his `book' this year. entered the market as a hedge against the grow- ' e inevitable sooner or later....

By CUSTOS IF conditions were normal one would expect a pre-Christmas rally in the stock markets, but they are not normal and what new buying comes along is usually swallowed up...

'1 remember,' said the old gamekeeper, 'going up to the little lake one day and finding a boy fishing there. He had come on a bicycle. When we asked him he said he had had...

By IAN NIALL THERE is perhaps no time of year when the country- side looks more denuded and sad than it does at this moment. The leaves have gone from the trees, the pasture is...

PIED JACKDAWS From time to time one sees or hears

about white blackbirds, blackbirds, crows and jackdaws with several white feathers in their plumage. My son told me not long ago about one of these odd birds he had seen, a...

Bonemeal or bonefiour makes a good pick-up for things sapped of strength by the presence or proximity of shrubs or hedges. Another cure for a common ill is lime to sweeten these...

5 One ducks, it seems, on reaching these verandahs I `From of the world I turn to ducks, Beautiful, comical things' (Harvey) (8). ACROSS (6). know 9 But should it not have...

SPECTATOR COMPETITION No. 408 Report by Papoose the Birth and Infancy of Christ. In mediawal times the tern; 'cantilena' was' often applied to a ballad on a sacred subject,...

The D'Oyly Carte Opera Company is now playing at Stratford-upon-Avon.

The usual prize of six guineas is offered for a, passage of not more than twelve lines of blank verse or ISO words of prose from The Yeomen of the Guard as William Shakespeare...