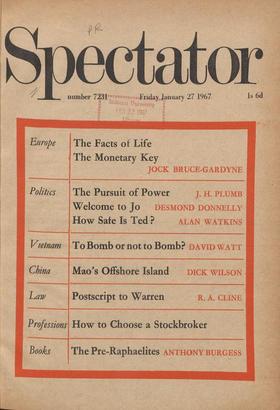 Europe: The Facts of Life

I T is the conviction of this journal that, in spite of all appearances to the con- trary, the Prime Minister is engaged in a genuine and sincere attempt to get Britain into the...

Tune in on a London dinner party con- versation and chances are the subject will be the latest Brown indiscretion.'—Mr Anthony Lewis in the Observer. I fairly frequently go out...

How Safe is Ted?

POLITICAL COMMENTARY By ALAN WATKINS MHE press releases of the Scottish Conservative I and Unionist Central Office are not, in the normal course of events, the gayest pieces...

By DESMOND DONNELLY, MP M R 01/mom's decision to abandon the leadership of the Liberal party in favour of a free-lance political career raises once again the question of the...

To Bomb or not to Bomb?

By JOCK BRUCE-GARDYNE, MP N the day the Group of Ten agrees on a scheme to create a new reserve unit you can forget about the Common Market as far as Britain is concerned.' I...

T BEGIN my notebook this week by recommend- ing two new slim volumes that should be 'must' reading for every Member of Parliament. About the first—Arthur Schlesinger's analysis...

The Pursuit of Power

By J. H. PLUMB effect of age on power is a theme which has haunted my mind for some time now. After all, the world is still littered with aged and ageing politicians—de Gaulle,...

January 26, 1867 •• The Regent's Park catastrophe seems to have been a sort of signal for persons who were not, but might have been, drowned, to abscond. In at least eight or...

By DICK WILSON rr HE continuing political crisis in China is I beginning to cause nervousness among those concerned with the administration of Hong Kong. Mr George Brown's New...

711E PRESS By DONALD McLACHLAN A NUMBER of people have asked me what the new titles at Printing House Square might mean : editor-in-chief, associate editor and so on. In any...

THE LAW By R. A. CLINE I r is a mistake to assume that the appeal court of the House of Lords is the highest tribunal in the land. Lawyers and judges (especially judges) know...

TELEVISION By STUART HOOD EW things are more obscure to the r general public than the concept of the ITV network. One's most intelligent friends are in a state of hopeless and...

AFTERTHOUGHT By JOHN WELLS THE great advantage, it has always seemed to me, of theology as a hobby is that, unlike other pastimes such as playing the flute or rowing single-...

Fleet Street Squeeze SIR, —When your commentators leave questions in the

air I am sure you would like them answered. Writing on 'The Press' in your issue of November 18 Mr Donald McLachlan says: 'The Express . . . must be wondering what the key to...

Literature and Censorship SIR,—It has long been the policy of

those wishing to discredit supporters of religious, moral or political views with which they disagree to allege or insinuate that such people indulge in sexual excesses or per-...

Family Allowances SIR,—I read that the allowance paid in respect

of the third child of a family is to be increased and I think that this is good at this time so long as we look where our charity is taking us. In the days of, say, the...

A Christmas Sermon SIR,—Mr Waugh and the SPECTATOR deserve the

thanks of all who are concerned to prevent the cur- rent dialogue on ecumenism from deteriorating into pious gossip, flavoured with kindly equivocation and theological...

Tories in Transition SIR,—I was disturbed to read David Howell's

latest article (January 20), for he has obviously failed to come to terms with the two Tory defeats at the polls. Of course the Opposition lacks all the information it would...

'the Sunday Times, which is certainly the best Sunday newspaper in the world.' This, following closely the award by the Granada television programme, What the Papers Say, to the...

Rationality, Reason, and Dr Rose SIR,—Alan Watkins, in his criticisms

of Dr Rose's book Influencing Voters (January 13), expresses views which I can only hope are not shared in Central Office. American motivation research experts tell us that...

SIR,—I was fascinated by Mr Quintin Hogg's review of the latest translation of his favourite Catullus, and I certainly agree with him that the rendering he quotes of the odi et...

SIR.—Mr Hogg says (January 20) that Catullus 'can only be

treated effectively by the use of classical English verse forms and rhyme, in other words, the whole traditional box of tricks.' It may be that when Mr Hogg makes public the...

The Pursuit of Truth

SIR,—Readers of the review by Dr J. H. Plumb in your issue of January 13 of The Enlightenment: An Interpretation; the Rise of Modern Paganism, by Peter Gay, published in the...

SIR,—In his article 'Down with Effie' (January 20), Dr Roy Strong says that Ruskin was 'usefully declared impotent' to facilitate the annulment of his marriage, but recent...

cites Da Nang as 'the place from which the majority of the air attacks are launched against the North.' This is incorrect. I was told on good authority while I was recently in...

SIR,—As a layman, I respectfully agree with Dr Roy Strong

that 'everything was all right [with Millais] until that woman came along'—i.e., until about 1856. Some of the later pictures are indeed as nasty and repellent as some of the...

How to Choose Your Psychiatrist SIR.—The essential qualities of any

consumer guide are that it should be accurate and objective. In so far as it concerns psychoanalysis, John Rowan Wilson's 'How to Choose Your Psychiatrist' (January 20) is...

SIR,—Malcolm Rutherford states in his 'Vietnam Diary' that the North

is less populated than the South. I bad always understood that the position was exactly the reverse and that this fact explained the reluctance of the South Vietnamese (and the...

Music by the Sea

SIR,—I am writing a study of the orchestras at the spas and seaside places and I should be glad if any of your readers who have information, old programmes or personal memories...

Sta.—Dr Roy Strong's article on the Millais ex- hibition at

the Royal Academy is a curious blend of art criticism and prejudiced misogyny. It is a great pity that he should apportion blame in such slapdash terms, particularly as the real...

M U SI C By CHARLES REID A SYWHONIC repertory that once looked like running aground on the `standards'— Beethoven, Brahms, Tchaikovsky, Mozart (especially Mozart, about whom I...

By HILARY SPURLING A LEKSEI ARBUZOV'S The Promise (at the For- tune) is the kind of play we don't often get these days, and certainly not from living play- wrights. Mr. Arbuzov...

Out on a Limb

I T is with a sense of relief and gratitude that one heads out east again to the Whitechapel Gallery—relief that the financial crisis of the last few months which threatened to...

ART Rejection from this show can cause paralysing heartache; inclusion can mean all the difference to the courage and application brought to bear on subsequent work. There is.....

BALLET By CLEMENT CRISP R EADERS of these columns can be in no doubt as to the importance I attach to Kenneth MacMillan as the most gifted and significant choreographer of...

W HEN the time came round in our suburb for repapering the front room, when I was a child, it was customary to send out for new second-hand pictures, since everybody was...

Faulkner Memories IN 1944 William Faulkner was living in Holly-

wood, forced by financial necessity to work for Warner Brothers on films such as To Have and Have Not and The Big Sleep. Although his repu- tation was high in Europe, his...

Oakeshott's Philosophical Politics. By W. H. Greenleaf. (Longmans, 15s.) THIS is the first volume of a new paperback series of 'Monographs in Politics.' It is,' the editor...

THE student of literature about merchant banks tends rather quickly to tire of anecdote. The Rothschilds and the early news of Waterloo, Queen Victoria's comment on the great...

East and West One Man's Destiny. By Mikhail Sholokhov. (Putnam, 25s.) The Portuguese Princess. By Tibor Ddry. (Calder and Boyars, 30s.) The Secret of Santa Vittoria. By Robert...

How to Choose Your Stockbroker

rx - 'MIND - v - A 8 III grU CONSUMER'S GUIDE TO THE PROFESSIONS —6 This article is contributed by a partner in a leading firm of brokers. For his protection—from his...

The Heart of Darkness

'You do not know my brother; he is a dagger one might use, but which one must afterwards discard.' This chilly comment on the Moroccan T'hami El Glaoui was made, during early...

Don't Bank On It

By JOHN BULL W HAT did Mr Callaghan's summit meeting of finance ministers at the weekend achieve? I want to discuss the prospects for interest rates in the light of the...

By CUSTOS As a whole equities have remained quiet, irre- gular and lifeless this week. The economic indicators continue to point downwards, but the size of the decline in...

SOLUTION TO CROSSWORD No. 1257

CONSUMING INTEREST By LESLIE ADRIAN Taking what happened in Cathy: her ageing grand-dad was compulsorily removed to a 'home,' a rare instance (Mrs Willmott says that 'out of...