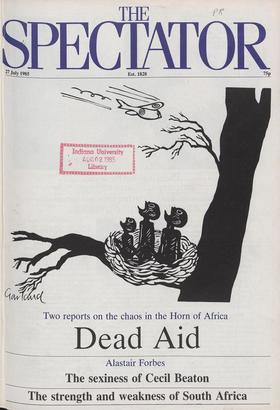 Financial aid A state of emergency was declared in 36 towns and cities in South Africa. Four died in riots, 119 were arrested. A dam burst in the Italian Dolomites washing away...

SINCE the traumatic defeat of his Mies tower one of Mr Peter Palumbo's oddest ideas has been 'that a body should be created to act as a guardian of architecture and to give it...

SOUTH AFRICAN CANT T he imposition of a state emergency in South Africa has provoked much comment in the West. Most of it has been canting and some of it worse. One would...

MR NEIL Kinnock has delivered himself of various uncomplimentary remarks about Mrs Thatcher and her government as he has travelled across the world this week. In Rome, he agreed...

The principled way to keep a good party going CHARLES MOORE I t was hot and sunny just for once on Tuesday and our party sat in the garden and talked. There were elder...

W hat do the following divers persons have in common? Chairmanship, direc- torship or membership of: the Metrication Board; Port of London Authority; Mid- land Bank; Trust House...

Must A. N. Wilson suffer the eternal torment of hell fire? AUBERON WAUGH A s a small Catholic boy of about ten or eleven years old, being instructed in my religion, I, too,...

Edward Theberton on the strife and confusion impelling Somalia and its refugees towards inevitable mass starvation ARMED only with a Somali phrase-book written during the days...

Matthew Lockwood meets two aid workers who prefer dope to their job Karitna FOR six black-market pounds you can take the bus from Khartoum to Karima. For rather more money —...

A JOB FOR THE ARMY

Stephen Robinson finds little panic among White South Africans at the state of emergency Cape Town IF SOUTH Africa is about to go bang, it certainly doesn't feel that way to...

William McGurn finds the Old World consenting to its own cultural rape AN AMERICAN can find himself in no more precarious situation than when he picks up his pen and turns his...

Richard Bassett on the effects of anti-freeze in Austrian wine Vienna WHATEVER the consequences for Anglo-Austrian trade of this week's hasty Withdrawal of Austrian sptitlese...

Paul Johnson will resume his column next week.

CITY Merchant Banks? Who are they: Rothschilds, Barings, Hambros? No, City Merchant Banks is the vainglorious new name chosen for itself by the small banking house of P. S....

FRESHFIELDS and lawsuits new! What a field-day for the City lawyers. The Bank of England sues Arthur Young, auditors of Johnson Matthey Bankers, for about £240 million. Arthur...

Pound's Italian lesson on the expletive-deleted Snake CHRISTOPHER FILDES T he man with the right idea about the bra was President Nixon. Pressed to action by his staff, he...

THE Austrian-born economist turned civil servant turned banker, negotiator for the Marshall plan and for Britain's earliest and most hopeful attempt to enter Europe, chosen by...

Sir: 'Templer never thought of himself as Irish' (Max Hastings's review of 13 July). The following dialogue took place during Templer's first visit to Kampar in Perak, where I...

Sir: I was sorry to read Nigella Lawson's gushing praise of the frogs' legs available in the brasserie she was recommending (13 July). Has she any idea of the revolting cruelty...

Sir: It is kind of Lord Montagu to try to assuage my unease about recent events at Stonehenge (Letters, 13 July). He suggests that my reading of newspapers has been 'selective'...

Sir: I almost weep to say that I agree with Charles Moore's words on this subject (Politics, 20 July). I agree with him as a result of my experiences during a career in the...

Sir: I was glad to see the letter from the Revd Joseph McMahon (20 July) com- plaining about the misuse of the word `theological'. It is a pity that in the same issue John Lloyd...

Sir: In reading through the issue for 20 July, I have the fearful impression that your journal does not have a good word for anybody these days. Auberon Waugh writes about the...

Sir: The conversion of the Spectator into a Vatican house journal continues apace. This process reached a new low in this week's issue when no fewer than three major articles...

No new flower generation in Gorbachev's Kremlin COLIN WELCH I have not had the pleasure of meeting Mr Gorbachev, liked by Mrs Thatcher, a man she can do business with,...

The isolation of Dacre's dozen

Eric Christiansen RENAISSANCE ESSAYS by Hugh Trevor-Roper Secker & Warburg, f15 istorical essays have gone downhill over the last century. As late as the Nineties they were...

What Cato did, and Budgell

Andrew Gimson THE ILLUSTRATED ZULEIKA DOBSON by Max Beerbohm Yale University Press, £12.95 S . uicide, though still quite widely prac- tised, is no longer fashionable. It is...

Drunk, but not too drunk (Grand Buveur)

Grain is slaughtered by pounding it Musically to obtain its spirit, which Will show you everything. The spirits in music Are more than audible. Death? The eggshell chiming like...

A poor village in fascist Italy

Miranda Seymour FONTAMARA by Ignazio Silone Dent, £8.95 F ontamara is one of the small band of books which, once read is never forgot- ten. Silone wrote it in 1933, basing it...

How pleasant to meet Mr Young

Francis King SLOW BOATS HOME by Gavin Young Hutchinson, 02.95 aft, S ince it took Gavin Young a whole year to ocean-hop and island-hop from Hong Kong ever westwards to an...

Short-sighted in youth, Long-sighted in age, The eyes he once screwed up to view the mountains He now screws up to focus on the page: Those far-off sights now beautifully clear;...

Sadness and loss at the end of the road

Andrew Brown MEMORY BABE by Gerald Nicosia Viking, £10.95 J ack Kerouac's life though full of inci- dent and even marriages has a curiously dead, uneventful quality. He did a...

Indian cinema Bombay Monty Python and his critics Anatol Lieven T he international film festival which takes place at Pesaro in Italy every year is run by the Mostra...

Mutiny (Piccadilly) Me and My Girl (Adelphi) Destiny (Half Moon) The sound of music Christopher Edwards I sometimes ask myself if Spectator read - ers might be more...

Prom preview Peter Phillips M ost people are usually in some way critical of the annual line-up of concerts in the Proms. There are so many possible areas of disappointment,...

The Coca-Cola Kid ('15', selected cinemas) The unreal thing Peter Ackroyd H ere is an oddity: a film made in Australia by a Yugoslav about an Amer - ican company. And it...

Ballet Rambert (The Big Top, Battersea Park) Star turns Julie Kavanagh I came away from Festival Ballet's new mixed bill feeling rather as I do when I allow myself to watch...

Growing pains Ursula Buchan E choing down the years from child- hood comes back to me the rhetorical 'Won't you ever grow up?', a question which, flying in the face of...

Dining with Dicky Taki A s ex-Presidents of the United States go, the only one I'd cross the ocean in order to dine with is that darling of the liberals, Richard Milhous...

Snippety-snaps Alexander Chancellor N othing diminishes a person more than a new peerage. People who may have earned our grudging respect as commoners are suddenly made to...

Being beastly Jeffrey Bernard I was talking to a Jewish Ulsterman in the Coach and Horses the other morning who told me that he was bisexual. People and particularly strangers...

River-boat ride Alice Thomas Ellis T he summer party season is at its height and I'm wondering how many peo- ple have OD'd on white wine. I have. I never want to see another...

Edible bacon P. J. Kavanagh A t the Francis Bacon exhibition I was overcome by a series of yawns. That is not meant as a piece of art criticism, or even as a comment to please...

Word of the week Jaspistos I n Competition No. 1379 you were asked for a definition of the ima g inary word 'rnacelod', to g ether with etymolo g ical de- tails, examples of...

NOW 'summer' is here, there is no time to be lost. Imperative cooks should be pre- paring for Christmas. In past columns I have repeatedly urged the necessity for urban...

You are invited to supply a classified matrimonial advertisement (maximum 120 words) on behalf of some famously un- attractive fictional character. Entries to 'Competition No....