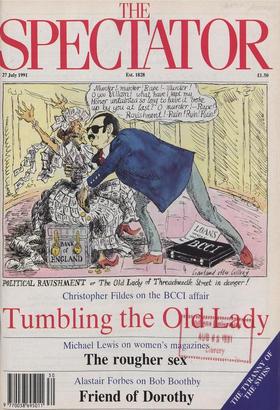 `It's true that the 8.15 from Epsom to Victoria was late, but I swear it won't happen again.' A n independent inquiry into the clo- sure of the Bank of Credit and Commerce...

Targets all round in the citizen's Toytown NOEL MALCOLM J ust before Mr Major presented his Citizen's Charter to the House of Com- mons on Monday, there was a little knock-...

I did not attend last week's party to cele- brate the 150th birthday of Punch. It was held in the Victoria and Albert Museum and if I had been the editor I wouldn't have...

A sacrifice to the lares and penates would cheer us all up CHARLES MOORE A nyone who wants to know what is right or wrong about the proposed reorga- nisation of the British...

In the celebration on Wednesday of the jubilee of Mr. Cook's great under- taking for lightening the responsibilities and difficulties of travellers, Mr. Cook was treated as a...

SPECT THE library on How to save yourself 51 trips to the ... or over £30 The Spectator Spectator you'll know a copy anxious and common subscriber. you direct price. That's...

THE PILGRIMS OF THE RIGHT

Gaspar Tamas thinks that Westerners are fooling themselves about the new Eastern democracies THE Hungarian-American don, Paul Hol- lander has contributed to the history of...

Michael Lewis is shocked by the aggressive approach of women's magazines to sexual activity ABOUT a year ago I had a call from an editor at Glamour Magazine, who was con-...

William Cash finds there is a part of England that is forever France THE BOURGEOIS expatriate stink over Peter Mayle's best selling A Year in Provence is soap-box stuff. The...

A reader received this letter: Dear Mr Williams. Turn your winter 1991 into a wonderful Damart world of fashionable warmth and comfort. You'll enjoy looking over our Catalogue...

persist . . The prison hospital is not a pretty place, but it is very clean. This is because mop- ping floors and walls is prison physio- therapy par excellence: like swimming,...

that journalists need less politics and more clout JOURNALISTS are expert at telling other people how to run their affairs but not so good at looking after their own. In the...

Sir: You say in your leader (6 July) that the defence advanced by Pat Pottle and myself was 'precisely' that used by the 19th- century Russian revoltionary Vera Zasu- lich who...

Sir: The letter from the news editor of Cosmopolitan, Eleni Kyriacou, speaking up for the victims of alleged 'date rape' (13 July), in fact does their cause no good. It would...

Sir: Jeffrey Bernard told us (Low life, 15 June) that his advanced state of decay forces him to buy a walking-stick, two being perfect support were it not for their impediment...

Sir: I read City and Suburban in the 13 July Spectator: very interesting. My eye was caught by the reference to Bagshot. Whenever I refer to Bagehot in articles they print it as...

Sir: I have been engaged to catalogue the musical compositions of the British pianist and composer John Ogdon (1937-1989) so that an archive of his works can be estab- lished....

Sir: I noticed in the leading article of 27 April the suggestion that VAT should be raised to 20 per cent and local tax abo- lished completely. If this is a good idea, why would...

Sir: Andrew Kenny's 'Animal rights and wrongs' (29 June) blows some fresh air on this subject. He is wrong, however, to say that 'the term "animal rights" would sound strange to...

Sir: I beg to differ with Sir Nicholas Fairbairn's panacea for the overpopulated Third World (Another voice', 18 May). I may add that his proposal to spend £167 million on...

The flattened molehills stepping-stone the lawn Towards fresh soil-heaps near the Judas tree. Pink clematis flowers embrace a rusty cypress. The creaking wingbeats of a wood...

A soldier much traduced

Robert Blake FIELD MARSHAL EARL HAIG by Philip Warner Bodley Head, £15.99, pp.296 O f the making of books about Douglas Haig there seems to be no end. Even at this late date,...

Robert Cecil THE BUTCHER'S EMBRACE: THE PHILBY CONSPIRATORS IN WASHINGTON by Verne W. Newton Macdonald, £14.95, pp. 448 C an there be scope for yet another book about the...

An innate sense of superiority

We apologise to Simon Curtis, whose poem 'Ivanhoe NSW' was misprinted in the issue of 6 July. The 17th line should have read 'a sand-plume unfurls in slow motion, like smoke'.

Not seeing the good for the sleeves

William Mount I HEARD IT THROUGH THE GRAPEVINE, MARVIN GAYE: THE BIOGRAPHY by Sharon Davis Mainstream, £11.99, pp. 304 M arvin Gaye was one of the kings of Sixties Soul and the...

The parson and the squire

Frances Partridge VICTORIAN MINIATURE by Owen Chadwick CUP, £4.95, pp 189 T his portrait of life in rural England in the 19th century, reprinted from the origin- al edition of...

Mark Illis VARYING DEGREES OF HOPELESSNESS by Lucy Ellmann Hamish Hamilton, £13.99, pp. 181 omeone should produce a thesis on the virgin in the literature of the past few...

Ursula Buchan THE HISTORY OF GARDEN DESIGN: THE WESTERN TRADITION FROM THE RENAISSANCE TO THE PRESENT DAY edited by Monique Mosser and Georges Teyssot Thames & Hudson, f45, pp....

Up to the hilt Harriet Waugh Costner's Robin Hood: Prince of Thieves is the most rumbustious and enjoy- able presentation of the story yet. In this version Robin returns from...

Greater glory Robin Holloway S omething completely different happens to one's music when it is heard in a liturgi- cal context. No doubt the silence which has become habitual...

its idiry A monthly selection of forthcoming events recommended by

Schools of Thought: Hampshire Architecture 1974-1991 (RIBA, till 9 August) Hats off for Hants Alan Powers I n the years immediately after the war, public sector architecture...

Backs to the wall Alistair McAlpine F or some months, the art market had been waiting for the sale of the Chester Beatty collection on 25 June. They talked endlessly about it....

To the moon and back John Diamond I f you want to determine the precise rate at which the material world is speeding towards its doom, spend a depressing hour or two in front...

Marlyn Harris is on holiday.

Chat line Zenga Longmore Uncle Bisi, however, is made of sterner stuff than the average double-glazing expert. Last Thursday, he suffered seven long minutes of a one-sided...

Hype hop Taki t is now two whole weeks since I started the book tour, and I'm beginning to take myself extremely seriously. Not a day goes by without seeing myself on the...

Imperative cooking: sin in Andalusia I

"Lo i°14/ Ljfk—AL-42 Almeria I'VE HAD several letters wanting more advice on tapas. Some wish to know what to look for in Spain. But there is also a pre- dictably indiscriminate...

Jeffrey Bernard is homeless and unwell.

SCOTCH WHISKY vv COMPETITION l 2VM SCOTCH WHISt(Y Poem for a pair Jaspistos I n Competition No. 1686 you were in- vited to write a poem in celebration of a famous pair—...

Brace of bishops Raymond Keene T here are certain endgames notorious in the theory of chess for their extreme difficulty. One such is the ending of two knights against pawn,...

Solution to 1016: So they say Solutions to the asterisked

According to a recent reviewer of his book Ideology, Terry Eagleton 'makes theory not just compelling but sexy'! You are invited to write a piece of prose (maximum 150 words)...

Country batters Frank Keating WHILE the West Indian cricketers were ominously limbering up for the Test match we got to musing on their lovely names. They could be English...

Q. I have often felt frustrated, on visits to hairdressing salons, by the fact that one's submission to the sensuous relief of pro- longed digitocranial teasing, is usually...