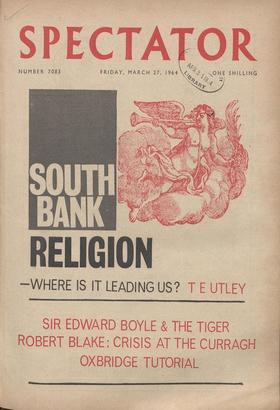 WHERE IS IT LEADING US? T E UTLEY SIR EDWARD BOYLE & THE TIGER ROBERT BLAKE: CRISIS AT THE CURRAGH OXBRIDGE TUTORIAL

The Millions Who Stay Away

T HIS Easter Sunday nearly two and a half million people in this country alone will receive Holy Communion from the hands of Anglican priests. There are two quite opposed...

Portrait of the Week— SUDDENLY 'the biggest Tory revolt since

1940' was over; ten compromising amendments from Mr. Heath to his r.p.m. Bill and the back-benchers abandoned the barricades ready to march through the lobbies. The Prime...

Talking to my Tutor

By MALCOLM RUTHERFORD tr EIREE weeks ago the Spectator printed an 1 editorial headed 'Dealing with Oxbridge.' It wasn't particularly original and the line it took— that Oxford...

Mr. Heath and the Rebels By DAVID WATT IT was like one of those gruesome Tatter pictures. 'The Hon. Michael Foot shares a joke with Lord Edward Heath' or 'The Duke of Foot has...

From TIM PAT COOGAN D I R IA N rr titL fact that Dubliners will no longer see the .11 tubby figure of Brendan Behan, head canted slightly to one side, feet twinkling along as...

Reinforcements for the Laager From STANLEY UYS

CAPE TOWN TT seemed only yesterday that Government j politicians were accusing the Opposition of wanting to bring in immigrants to 'plough the Afrikaner under.' This kind of...

From BERTRAND DE JOUVENEL PARIS THE French local elections held on March I 8 and 15 have attracted a good deal of attention here, though the turn-out was low, because they...

The Shadow of Kashmir

From CDANCHAL SARKAR NEW DELIII T may not be apparent, but the same prin- I ciple is under strain at two opposite ends of India,, Kashmir and Calcutta—secularism. The...

Sir Edward and the Tiger

By WE 12 BUBM 1.11 STER Director' of the Department of Extra-Mural Studies, University of London There is perhaps no branch ot our vast educa- tional system which should more...

Victory So, at last, it was Bannockburn. After fourteen years

the Calcutta Cup is back in Scotland and we can look the Sassenachs in the face again. It was a noble game won by a Scottish pack filled again with the fire and devil that had...

Let's Keep it out of Party Politics

The Churches should make a special plea that this kind of issue should not become aggravated by the pressure of party politics.—Bishop of Chichester. The matter is too serious...

Tailpiece Just in case some readers think the last para-

graph a little prejudiced it is pleasant to be able to end on a note of applause for Mr. Wilson. At his Usher Hall meeting he described the 1922 Committee's lunch to the PM as...

Is the National Theatre so called because it is subsidised by the State or because it sets out to serve a reasonable cross-section of the nation? In his paper to the Royal...

Naturally, one doesn't blame the electricity workers for wanting more money in principle. On the other hand, they are hardly impoverished. But i imagine many readers of the...

Cuckoo in the Nest I have often done silly things.

I have often realised that I was in the wrong place at the wrong time. But never have I seen anyone look so absurdly out of place as did the leader of the Opposition when,...

Canute and the Overspill

Many thousands of words commenting upon the proposals for coping with the South-East's Population explosion have been published in the P a st few days. I have read them with...

It was inevitable that the troubles of the electricity power

stations should set off a fresh burst of general election speculation. The political potential of this dispute is, indeed, fascinat- ing. Without subscribing to the view already...

South Bank Religion: Where is it Leading?

By T. E. UTLEY ?THERE have lately been some signs that both I sides in the South Bank controversy are beginning to feel that the time has come to ring the bell. This is,...

The View from My Village

By JOHN FOSTER 'There's no doubt about it : the estate agents have got it all wrong. I mean, it's stupid to talk about fields of buttercups and gold corn when they've all been...

By RANDOLPH S. CHURCHILL WHEN in any industry one firm has got so far ahead that it has collared 60 or 70 per cent of the business, other firms in the same field cease to...

THE COMING EXPLOSION OF LONDON SIR,—This article frightened me so

much that I for one am now determined not to have more than two children. Nevertheless is it not rather boneheaded of the Registrar-General to assume that the population will...

SIR,—A curious feature of the outlook of most political commentators, well illustrated by Herld Fairlic in his thoughts on Orpington, is the assull 1 P" Lion. that political...

S1R,—Mr. Booker's article on cinema-veriie last week started with a derisory reference to a commercial television programme he 'did not manage to see' himself; dealt with my...

SIR, In your lait issue Mr. Hendrik Picnaar seeks to excuse the South African Government's persecu- tion of Randolph Vigne, the Liberal,journalist. The excuse that he gives is...

SIR,--I have been following the controversy about the role of Oxbridge in research with increasing' surprise; but not till last week's letter from Mr. Peter Laslett has my...

WHO WILL BE WATCHING YOU?

SIR, — After reading Arnold Beichman's article on March 13, which reveals the threats involved by the progress of technology (the same problem is raised by socialised medicine),...

PROSPECTS FOR THE FLAT Sus,—For the record may I correct

one or two minor errors of fact in an otherwise fascinating article 'Classic Prospects for the Flat' in your issue of March 13? The correct figures, with those given by your...

THE FUTURE OF THE AGED

SIR, — Bertrand de Jouvenel in his article on 'The Future of the Aged' deals rather curiously with the economic aspect of the problem. He states that retirement means an...

SLR, — Mr. Bernard Miles, you, sir, as the pub- lisher of his letter, and perhaps some of your readers, might be interested in the following judgment delivered by a Court of...

Fairlie has got it w:ong. Orpington man .1s represented in

Shakespeare not by the Porter in Macbeth but by Mcrcutio in Romeo and Juliet ('A Plague on both your houses'). And, as a teacher, 1 shall be voting Liberal in the general...

A DUCHESS AND HER DESCENDANTS

SIR,—I have been commissioned to write a book on duchesses who for one reason or another were of interest in the life of the nation, amongst whom is to be included the Dowager...

By JOHN SWANEY* ONE of the first impres- sions that strikes most Americans visiting Britain is that the differences be- tween the two countries are often exaggerated. Such is...

SIR,—Your contributor Bertrand dc Jouvenel is to be congratulated for

his very splendid article on 'The Future of the Aged.' My generation—that is, the over sixty-fives—have indeed been 'toppled to a position of excessive in- feriority and...

Hang Down your Had and Die. (Comedy.) — '44 The Formation. Dancers. (Arts.) FEW people like to be harangued: everyboi■ ikes to be amused. Com ,i.tted theatre has to jugkle. way...

THERE were moments at Covent Garden during 1 Puritani when I asked myself whether we hadn't gone out of our minds. Stalls at three and a half guineas, the house packed and sold...

The truth is that this painter's intense ex- pressionist fervour in exploring the structures of human and mountainous forms, with colour and forceful brush-strokes all his own,...

By ISABEL QUIGLY Muriel. (Cameo-Poly; 'A' certificate.)—The Fall of the Roman Empire. (Astoria; 'U' certificate.) AFTER Marienbad, what? Though his themes are all muah of a...

Crisis at the Curragh By ROBERT BLAKE THE fiftieth anniversary of 1914 is producing its predictably heavy crop of books. They divide into two categories. The first and larger...

The Myths of Love. By Denis de Rougemont. Translated by Richard Howard. (Faber, 25s.) In General and Particular. By C. M. Bowra. (Weidenfeld and Nicolson, 30s.) THESE two...

The Earth-Owl and other moon-people. By Ted Hughes. (Faber, 15s.) The Place's Fault and Other Poems. By Philip Hobsbaum. (Macmillan, 18s.) - TED HuottEs's latest volume of verse...

The Radical Tradition. By R. H. Tawney. Edited feld and Nicolson, 30s.) THE canonisation of which R. H. Tawney has recently been the victim has served to obscure both his...

A Way of Feeling

A Passion in Rome. By Morley Callaghan. (MacGibbon and Kee, 25s.) Nothing but the Best. By Clifford Hanley. (Hutchinson, 21s.) • THERE is an American vocabulary for the...

Primer for Revolt : The Communist Takeover in Viet-Nam. By Truong Chinh. With an introduction and notes by Bernard B. Fall. (Pall Mall Press, 35s.) From Colonialism to Communism...

To All Watchers Over Public Morality

Secret pornographers who live In your cisterns, repressed gentlemen, Gaze lewdly at you as you bath. What a heavy burden you have to carry! They are your selves: The...

How Rich We Are!

By NICHOLAS DAVENPORT THE Budget.like the shrubs and trees, will soon be bursting into blossom. Why be nervous about its fruit? Are you still worry- ing about the January trade...

By CUSTOS three-week account on the Stock I Exchange began as quietly as the `go-slow' of the power workers and no one expects much to happen until the Budget is out of the...

By LOltiBURY T HERE is considerable reassurance to be gained from the speech made by Sir Duncan Oppenhcim, chairman of British American Tobacco, to shareholders last week. He...

Doorstep Psychologists By LESLIE ADRIAN ADVICE to young brides contemplating an Easter hitch. Never buy anything at the door, even when hubby is at home. Some men are far more...

By ALAN BRIEN IT should be some com- fort to anyone who has ever been tarred by the brush of publicity that, a year after it first hit the headlines, Christine has become the...