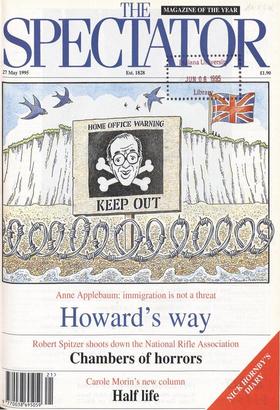 Killer bookworm M I John Major, the Prime Minister, let it be known that he was 'pretty annoyed' by comments in a forthcoming volume of memoirs by Lady Thatcher, a former prime...

An encyclopaedia of British corruption is not that much longer than a dictionary of Italian war heroes BORIS JOHNSON It is very largely this feeling of distaste, compounding a...

When the blood, sweat and tears have all dried up AUBERON WAUGH O n 25 May 1915, my grandfather, Aubrey Herbert, a captain in the Irish Guards attached to the Australian and...

The Home Secretary is planning tough new laws against illegal immigrants. Anne Applebaum argues that, though this might be politically astute, it is economically illiterate TOR...

CAN 3.5 MILLION AMERICANS BE WRONG?

Robert Spitzer argues that the American gun lobby is spending $100 million a year on a fatal misreading of the US Constitution New York IN 1982, the township of Brookhaven in...

persist.. . THERE IS no doubt that Mr Lilley, the Minister for Social Justice, is putting fear into the hearts of the malingering class- es. I discovered this while a prominent...

A LOT OF POLITICAL CREEPY-CRAWLIES

Anthony Daniels lifts up a few stones in Russia, and does not much like what he sees Moscow `RUSSIAN DESPOTISM,' wrote the Mar- quis de Custine in 1843, `. . . wages war on...

Will of the week.

THANK YOU, GERMANY Martin Vander Weyer argues that the nations we defeated 50 years ago have not destroyed the British car industry; they have saved it `FIFTY QUID, MATE,'...

MY HUSBAND and I were laughing about the Bishop of Edinburgh over breakfast the other day. It was not at the usual thing (genes and adultery), but the announcement that one of...

DO WE REALLY WANT OPIUM DENS?

FLORENCE was greatly alarmed by an earthquake at 9 p.m. on May 18th, which, though it did not throw down buildings in the city, destroyed many in the neighbouring villages. In...

Robin Harris argues that the Tories are stupid to attack Mr Blair's sincerity. The Labour leader's vulnerability has nothing to do with character IN HIS RECENT Mais lecture...

Simon Courtauld argues that the RSPB's narrow-minded environmentalism is causing untold misery for Britain's pigeon racers I WAS INVITED recently to the Black Mountains, just...

John Ware, the presenter of Rough Justice, argues it's about time that the BBC made a series about crooks who get away with it THE BBC'S Rough Justice programme is one of the...

We're coming out of bondage to the Chancellor let a million corks explode! CHRISTOPHER FILDES I call for a nationwide fusillade of cham- pagne corks at midday on Sunday....

Sir: Having just been elected as a deputy to the Belgian Parliament as a member of Vlaams Blok, I thought I would share my first experiences of the British press with your...

Sir: Nigel Nicolson regrets that he was not asked certain

questions as a witness in the Aldington/Tolstoy libel trial. Because of special interest I attended that trial, and I remember looking at Lord Aldington and feeling deep...

Sir: I am certain that there will be many punters like myself who will regret Giles Auty's decision to leave The Spectator and take himself off to Australia. I began taking The...

Sir: I wouldn't quarrel with the gist of Paul Johnson's article (And another thing, 20 May), though only someone in the throes of infatuation can suppose that Mr Blair is 'made...

Sir: With a sigh of relief one bids farewell to

Giles Auty, who has got away with writ- ing the same whingeing article for the last four years in The Spectator. Do the Aussies really deserve him? Hilary Mussett 35 High...

Sir: It has been apparent for some time that British Rail needs a strategy to cope with its telephoning customers. I have been advocating a new separate class of carriage for...

Sir: In the light of his recent observations on abstruse words in Spectator articles (`demography', 'egregious', Letters, 20 May), we suggest that Mr Donald Froud should cancel...

Sir: Ross Clark argues (`There's nowhere else to go', 6 May) that road traffic levels are stable and therefore the need for improvements to the road network has passed. Mr...

Sir: Mr Ron Farquhar (Letters, 20 May) needn't be so snotty about my obiter dictum regarding the year when we might expect the 6,000th anniversary of the creation of the world,...

Sir: Professor Richard Lynn writes (Letters, 20 May) that my article on 'the inheritabili- ty of intelligence and the genetic basis of race differences in intelligence contains...

The Cabinet's appeasement of the green lobby has ruined one of Britain's natural wonders SIMON JENKINS E ach year I take my son to Wales and ascend Cader Idris, as my father...

PEN mightier than the word Philip Hensher ANGUS WILSON by Margaret Drabble Secker, £20, pp. 714 A cademics are fond of making the claim that all writing is political in...

Shusha Guppy BEIRUT BLUES by Hanan Al-Shaykh Chatto, £14.99, pp. 280 o nce the jewel of the Middle East and the favourite resort of oil lords — 'a rich tart living off immoral...

Frederic Raphael FITZGERALD AND HEMINGWAY: A DANGEROUS FRIENDSHIP by Matthew J. Bruccoli Deutsch, £14.99, pp. 226 M any people still find it a surprise and some a scandal —...

The eternal rocks beneath

Michael Carlson MOO by Jane Smiley Flamingo, £15.99, pp. 414 T he hermetically sealed world of the university campus is a disproportionately rich source for novelists. The...

Derek Pringle GOOCH by Graham Gooch and Frank Keating Midas, £15.99, pp. 320 hat can there possibly be left to say about a man whose public and, occasional- ly, private life,...

Gone but not forgotten

Anne Applebaum KONIN by Theo Richmond Cape, £18.99, pp. 520 A s it happens, I have been to Konin. Driving to Warsaw, I once stopped there to eat lunch in a down-at-heel...

What the reds were doing under the bed

Ermione (Glyndebourne) Ferocious seduction Alasdair Palmer T he reputations of composers and their works do not rise and fall at exactly the rate of hemlines. But musical...

Return to success Nigella Lawson I n all the agonised discussions of the rel- ative watchability of popular TV, it is always taken for granted that ITV has the edge. I admit I...

The best night out The critics THEATRE Dealer's Choice (Vaudeville 0171 836 9987). Best first play ever seen at the Cottesloe, now moved into the West End: Patrick Marber...

Honking Greeks Taki I live in the leafiest northern suburb of the Big Olive, one where building regula- tions are not only draconian, they are also , enforced. There are no...

The full banana Carole Morin M addie telephoned in the middle of the night to boast about her heart attack. `It's your mother,' Dangerous Donald muttered, passing me the...

Fear of living too long Jeffrey Bernard L ast weekend began as a financial disas- ter when I put £100 on Manchester United to win the Cup Final. As I am particularly...

Hooray for the UNA Nigel Nicolson A fter the war came the peace, and with the peace the United Nations and a plethora of acronyms all beginning with UN. Then we called it UNO,...

I WENT TO a wonderful piano recital last week given in aid of the Thompson Trust which assists post-graduate students of the piano, violin and opera as well as sea voy- ages for...

Chips down Raymond Keene WHY ARE MIND GAMES, and chess in particular, important to us? Throughout the history of culture, prowess at mind games has been associated with...

Malvedos 1979 Vintage Port for the first correct solution opened on 12 June, with two runners-up prizes of £15 (or, for UK solvers, the Chambers Dictionary - ring the word...

We shall see what we shall see Frank Keating THE SPRINGTIME crackles with antici- pation of mighty matters. Could the bad defeat by the Australians have dented West Indian...

Dear Mary.. . Q. An elderly literary couple, whose com- pany we enjoy, are frequent guests at our table. No one would deny that eccentricity is part of their charm, but the...