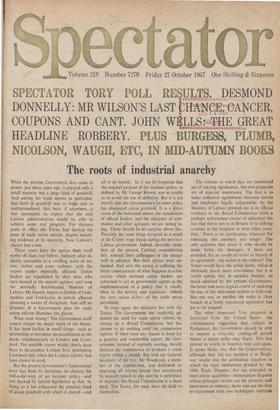 The roots of industrial anarchy

When the present Government first came to power, just three years ago, it enjoyed only a small majority but a large fund of goodwill. And among the trade unions in particular,...

So our application to join the European Community Is in and remains in We might have known it. Like all these; other glowing initiatives, the great European adventure neither...

No drain of brains or skills is likely to de- pnve us, evidently, of our ample ...national talent for cant. This week's news that cigar- ette coupons are to be forbidden is a...

Parliament reconvened this week. The Lords re- versed their July amendments to the Abortion Law Reform Bill and returned it to the Commons. Mr Wilson and Mr Brown were' kept...

Drink to me only

CHRISTOPHER HOLLIS 0, drink with me only orange pop And leave the whisky there, Or take a little fruit-juice cup • And do not look for beer. The man that does not take a drop...

Politics in a cold climate

POLITICAL COMMENTARY AUBERON WAUGH If there is anything in the world more depres- sing than Gorton on a wet, cold, foggy after- noon, it is Gorton when the sun shines. The...

The Tories on the Tories

SPECTATOR POLL At Brighton last week the SPECTATOR invited all those taking part in the Conservative party conference to complete a brief questionnaire about the conference....

GOVERNMENT DESMOND DONNELLY, MP The next session of Parliament, which opens on Tuesday, will see a new situation in British politics. The partisan arguments of last sum- mer...

Rules of the game

AMERICA MURRAY KEMPTON New York—Did not Madame de Sta0 once judge that Benjamin Constant was no longer in love with her because he was beginning to take pains with his...

RUSSIA: FIFTY YEARS AFTER —2 TIBOR SZAMUELY When the Bolsheviks seized power in Russia fifty years ago they did so with the avowed aim of building a socialist society....

NIGEL LAWSON America's greatest contribution to western philosophy to date (the field is admittedly not all that strong) has, I suppose, been C. L. Stevenson's 1938 Mind paper...

PERSONAL COLUMN PATRICK COSGRAVE It is usually forgotten by readers of Churchill's famous description of the Baldwin government --`decided only to be undecided, resolved to be...

From the 'Spectator,' 26 October, 1867—There has been a dispute in the City about the Lord Mayor's show. The great merchants want it abolished as a nuisance, and Alderman Allen,...

CONSUMING INTEREST LESLIE ADRIAN 'Everyone likes to receive these agreeable and bizarre picturettes,' wrote Rose Macaulay long ago on the subject of Christmas cards, 'but how...

PHILIP GOODHART, MP Saigon—There has never been a conflict more dominated by statistics than Vietnam. This is perhaps inevitable when a great power with immense bureaucratic...

TABLE TALK PENIS BROGAN In a dull and depressing week, two pieces of news have galvanised me. One is the undoing of a great historical crime of the nineteenth century. It was...

Beyond the Oxgrave MID-AUTUMN BOOKS

ANTHONY BURGESS 'Oxgrave'; it's a useful portmanteau but it suggests a full-bloodedness that isn't really a ppropriate—rivers of gore enriching the earth where the great beasts...

NIGEL NICOLSON 'Consanguinity,' wrote a reviewer of Winston's life of his father, 'is by no means a recommen- dation for the post of biographer.' On the contrary, it is rather...

J. H. PLUMB In the last ten years, the Festschrift has be- come an established English institution— sooner or later, it would seem, every historian of distinction is acclaimed...

In a glass case

MARTIN SEYMOUR-SMITH Language and Silence collects thirty-one of Dr Steiner's critical contributions to various periodicals and divides them into such cate- gories as 'Humane...

VERNON SCANNELL Sun leans lightly on all temples; In the park the far trees Melt at their shadowed knees. Summer supplies its simples For all but one disease: • Young dogs,...

A. L. ROWSE Sidney Keyes: A Biographical Inquiry John Guenther (London Magazine Editions 12s 6d) I never knew Sidney Keyes. But I had a curious experience in regard to him. In...

JOHN HORDER High on the Walls Tom Pickard (Fulcrum Press 21s) The Ship's Orchestra Roy Fisher (Fulcrum Press 18s) Just over a year ago, in these columns, C. B. Cox, when...

C. B. COX Twelve years ago Elizabeth Jennings published a poem called 'The Enemies,' which begins: 'Last night they came across the river and Entered the city.' It's not clear...

WILLIAM SARGANT Perhaps the reviewer should state that over two earlier books of his own Mr Koestler has been very critical of those who seek to try to understand some of the...

The Trial of Queen Caroline Roger Fulford (Botsford 42s). Was the Queen guilty of a flagitious relationship with her Italian major- domo? Mr Fulford explores the course of this...

Clever Dick at the front ARTS

PENELOPE HOUSTON There are two moments in Richard Lester's How I Won the War (London Pavilion, 'X') which fairly bulldoze their way out of the screen. In the first, a hideously...

Rare James JOHN HIGGINS The High Bid (Mermaid) Marya (Royal Court) Tom Paine (Vaudeville) Billy Russell was one of the great music-hall artists of the 'forties. With his...

TELEVISION STUART HOOD On the morning of 4 February 1966 the head of CBS news and current affairs, F,red Friendly, was sitting in his New York office watching an '. • array of...

NICHOLAS DAVENPORT It may be true to say that Bank rate usually comes down by 3 per cent and goes up by 1 per cent at a time, but to compare last week's rise of 3 per cent with...

PORTFOLIO JOHN BULL I like the look of Phoenix Assurance at the moment. So much attention is being paid to the battle for the control of Yorkshire Insur- ance, which Phoenix is...

Towards a European computer industry

CHRISTOPHER FILDES It will (I suppose) scarcely be argued that, now that takeover bids have so large a public fol- lowing, companies in bid situations have a duty as...

SAVINGS LOTHBURY '"How can you tell good poetry from bad?" I answered : "How does one tell good fish from bad? Surely by the smell/ Use your nose." ' The advice (Robert...

CUSTOS Judging by the strength of equity shares at the beginning of the week I would say that the market has completed its consolidation phase and is now resuming its upward...

Chairmen of property companies maintain their more cheerful note after the general gloom of the last couple of years. Mr Jack Bridgeland of British Land reports a 13 per cent...

Sir: Criticisms of my letter of 13 October show how much confusion the new law has caused—no man clearly knows whether he is breaking it or not. Indeed, the decision not to...

Sir : What will readers of our press a hundred years hence find most surprising? I discussed this with some friends and we looked through some recent copies of a morning paper....

Sir: I wouldn't want SPECTATOR readers to think me even more innumerate than I am. In convert- ing Centigrade to Fahrenheit, or vice versa, the first stage is add forty and the...

Sir: Of course the universalist-selectivist argument is important, even central, to the national eco- nomic debate. If and when these words are pub- lished we shall have seen...

Sir: I am surprised that Randolph Churchill, in his courteous review of my book The Selectorate (20 October), should put forward as a serious ob- jection to a primary election...

Sir: Why were we treated to a photograph of Lord Cromer in your edition of 6 October? Is he your best-looking contributor? Janet Cox Apt. 15, 4123 de Maisonneuve, Westmount,...

AFTERTHOUGHT JOHN WELLS Dusk was falling in Smith Square. It had been a cold, blustering October day, and the yellow- ing leaves that still clung so tenaciously to the branches...

Solution next week Solution to Crairaword no. 1296. Across 1