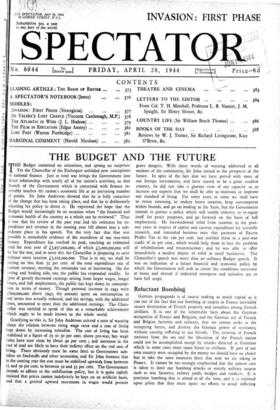 THE BUDGET AND THE FUTURE

T HE Budget contained no sensations, and sprang no surprises. Yet the Chancellor of the Exchequer unfolded new conceptions of national finance. Just as total war brings the...

THE BASIS OF EMPIRE

T HE debate on Empire unity in the House of Commons last week was an admirable prelude to the conference of Dominion Prime Ministers about to assemble in London. That gathering...

F OREIGNERS in London, and there are of course many of them today, must sometimes be considerably mystified at reports of proceedings in the House of Commons. In last Saturday's...

By STRATEGICUS T HE greatest single decision that marks the superiority of the Allies' initiative is that which allocated so cardinal a place in their strategy to air-power. It...

By VISCOUNT CASTLEREAGH, M.P. T HE so-called Irish problem has once again figured prominently in the news. Fresh issues have arisen and new constitutional -points are involved,...

THE ATLANTIC IS WIDE

By J. L. HODSON New Orleans, March. Y OU can fly the Atlantic in ten hours or less ; but it remains wide. Britain is undergoing the friendliest invasion, and one of the...

By EDGAR ANSTEY than these theatrical successes is the constant stream of instructional, expositional and propaganda films which have been made exclusively for showing outside...

By WARREN POSTBRIDGE T HIS is a perverse article. No one will agree with - it, and no one ought to. It is written from the heart, and in these days that is generally a mistake....

By HAROLD NICOLSON I N Pump Court the other morning I observed two United States G.I.'s chewing the cud of home-sickness and gazing upon the ruins of the Temple. I explained to...

A LULL in the pressure of new screen excitements provides the opportunity for an examination of trends. The Beautiful Cheat is not a great or even an important film : it...

ON A CHILD ASLEEP IN A TUBE SHELTER

London, March 1944 HE sleeps undreaming ; all his world Furled in its winter sheath ; green leaves And pale small buds fast folded lie As he lies curled as if his mother's arms...

have read with considerable interest the articles appearing from time to time in The Spectator from people who are temporarily engaged in Munition Factories. These articles are...

confirm. For ten years I was employed in the light

engineering industry, where mass production methods and the simplification of the tasks demanded of the workpeople have been scientifically pursued with almost complete...

SIR, —Captain Alan Graham, M.P., writing to you about the exodus .of Jews from the Polish Army (which amounts only technically to desertion, as it is done openly and with a...

SIR,—In the recent Lords' debate referred to in your last issue, no mention was made of the important question of patents. The Anti- Trust division of the Department of Justice...

Sut,—The active correspondence on the subject of Equal Pay makes me wonder whether this problem can be isolated, or whether it is indeed only part of a national problem which...

April 7th Mr. Geoffrey C. M. Makin has attacked some of my statements made in your previous issue concerning the decline of freedom and tolerance on the Continent of...

THE DOCTORS AND THE PUBLIC

siit,—" The Doctors and the Public "—a few comments. I have no time for more. Para. r. Rushed or not rushed? Have it your own way with regard to that, but this is not the time...

Six,—Whenever the question of the future Government is being dis- cussed it seems to me that too few people consider what would be the effect on England of an air offensive such...

Sus,—I cannot see what it is, exactly, of which "

M.D." complains. If he wants division of function, surely only a State service can give it him. If he wants laissez faire, he should remember that much of the quality of this...

THE FACTS ABOUT BOMBING

Sut,—With reference to Mr. Gavin Brown's letter in your issue of April 7th I daresay the Germans jettisoned an odd bomb or two in Kent or else- where in the spring of 1940. What...

NOT only those exiled in Italy should have a longing to be " in England now." The spring is unusually early only, I think, in regard to those happy beings who insist on being in...

SIR,—I was very interested in your article of December loth, " Recorders of War," by J. L. Hodson. I am sure the public do not appreciate the sterling work of British...

Sia,—In a recent issue you printed several screeds of Latin. I hope you do not intend to make a practice of this. I'm sure you are aware that we in Scotland do not learn Latin....

SIR,—Dr. Allen is not quite accurate when in his article on Crown Pro- ceedings " The to,000 Commandments " he says that the reform of the present procedure has been " resisted...

Education in Democracy: The Fmk High Schools of Denmark , .

S.P.Q.R.: The History and Social Life of Ancient Rome. By

IT may be affirmed with truth that there is a genuine revival of interest in pictorial art in this country, perhaps comparable to that stimulated by Ruskin nearly a century ago....

Find, Fix and Strike. By Lieut.-Commander Terence Horsley, R.N.V.R. (Eyre and Spottiswoode. 9s.) THERE is no doubt of the author's object in writing this book ; it is to throw...

The Heart of Jade. By Salvador de Madariaga. (Collins. los. 6d.) People Apart. By L. T. Shortell. (Rich and Cowan. 9s. 6d.) HAVING recently committed myself to the assertion...

tt THE SPECTATOR " CROSSWORD No. 268 (A Book Token

for one guinea will be awarded to the sender of the first correct rchawn of this week's crossword to be opened after noon on Tuesday week, Sin 9th. Envelopes should be received...

SOLUTION TO CROSSWORD No. 266

By CUSTOS IN framing his first Budget Sir John Anderson had a great oppor- tunity to leave well alone and has been strong-minded enough to seize it. Without turning the...

The Age of Catherine de Medici. By J. E. Neale.

(Cape. 6s.) WHEN Arthur Young was visiting the castles of the Loire not long before the French Revolution, he observed that the leaders of the French Wars of Religion " could...

Literature and Authorship in New Zealand. By Noel Mulgan. P.E.N.

Books. (Allen-and Unwin. 2g.) THE sense of exile—the excitement and nostalgia of the up-rooted- may have goaded into greatness such writers as Joyce or Henry James. On the...