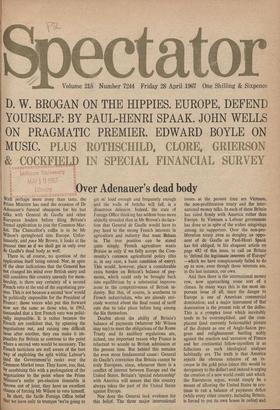 to use this deficit as a means of extending American financial and commercial power throughout the world. The weakness of the French case, however, is that it is wholly...

The theatre is a field in which this country has regularly excelled, and one of the few in which at present it leads the world. And the head of the theatre, both titular and...

The world's first space crash killed the Russian cos- monaut Vladimir Komarov: his returning spaceship went out of control, and he was given a state funeral in Moscow's Red...

A quiet time ahead?

POLITICAL COMMENTARY ALAN WATKINS Whatever the television critics may tell us, the age of satire, unlike the age of chivalry, is not, after all, dead. As evidence I quote Mr...

CHRISTOPHER HOLLIS (born March 29) Men born within a fortnight of 1 April are on average slightly less intelligent than people born at any other time.—Psychological study by...

Not the King's men

GREECE M. LLEWELLYN-SMITH There is no parallel for the present situation in Greece. Last week's coup d'etat differs from all previous coups in that it was organised by young...

THE PRESS DONALD McLACHLAN Fitting tribute to the dead, whether before the nation's eyes or those of the parish, is one of the regular services expected of newspapers, both...

defend yourself NON-PROLIFERATION PAUL-HENRI SPA.A.K The United States has secured the suspen- sion of the Geneva disarmament conference. It has acted wisely. It is giving...

J. W. M. THOMPSON - Perhaps it's the shabby grey - of the decor at Burlington Housi; more probably it's the per- Opportunity After last week's PEP report on the colour bar,...

From the 'Spectator; 27 April /867 — The Comte de Flandre,—Coburg, deaf, and very rich,—was on Thursday married to a Princess of Hohenzollern. The marriage is considered...

TELEVISION STUART HOOD We all know that control of a television chan- nel is a rich prize. Normally we imagine the only predators to be businessmen intent on riches and power....

MEDICINE JOHN ROWAN WILSON For a long time the bed has held an almost mystical significance in the practice of medi- cine. When I was a boy, if you were ill you were sent to...

PERSONAL COLUMN GILES PLAYFAIR To begin with an unfashionable admission, I try to speak pure Standard English. To con- tinue with another one, I am hoping to per- suade my...

ANTHONY BURGESS The twentieth century debunking of John Milton has, because of the critical energy en- tailed in his reinstatement, done nothing but good to his reputation. Two...

DESMOND DONNELLY, MP Morning and Noon Dean Acheson (Hamish Hamilton 35s) 'Out of our past we came, with our hopes, our fears, our beliefs,' writes Mr Acheson in the...

Ends of the earth RONALD HINGLEY Where the Sea Breaks its Back Corey Ford (Gollancz 30s) Madoc and the Discovery of America Richard Deacon (Muller 42s) Voice of the Turtle...

EDWARD BOYLE I found the first weekend of the new Brighton Festival a most rewarding experience. Inevit- ably there have been mishaps and disappoint- ments. But enough has...

Out of the blue PENELOPE HOUSTON Alone otz the Pacific (Academy Two, 'U') High and Low (Gala Royal, 'A') In 1962 a young Japanese, Kenichi Hone, made a solitary small-boat...

Industry and the state AFTER THE BUDGET

A SPECIAL FINANCIAL SURVEY RONALD GRIERSON Mr Grierson is managing director of the Industrial Reorganisation Corporation It is one of the minor hazards of modern life that new...

On other pages Leopold de Rothschild: The view from the City 498 Charles Clore: Prospect for 1967 498 Arthur Cockfield: Why incentives matter 500 Nicholas Davenport: A matter...

The view from the City

BANKING AND INVESTMENT LEOPOLD DE ROTHSCHILD One of the most encouraging features of the budget, in my view, was that it was a non- budget. There is no reason why the tempo of...

CHARLES CLORE The budget this year has been most disappoint- ing. Although it is a relief that we are not to be burdened with a further mass of complex legislation, I would...

TAXATION ARTHUR COCKFIELD Mr Cockfieid is managing director of Boots Pur e Drug Co. It was a tired budget from a tired Chaftcellor: the best a tired and disillusioned...

A matter of life and death

INSURANCE NICHOLAS DAVENPORT Like all good causes life assurance can be in- tensely boring. If a man knocks at your door to ask whether you have made provision for your poor...

MARKET NOTES CUSTOS Monday's shake-out on the Stock Exchange should serve as a reminder to the equity in- vestor to get his thinking straight. At the end of last week the...

CONSUMING INTEREST LESLIE ADRIAN We taxpayers are a lucky lot when it comes to bricks and mortar. The April issue of the Con- sumer Council's Focus drew attention to this in an...

UNIT TRUSTS JOHN BULL The steady expansion of the unit trust movement is wholly admirable. In the past six years total funds have grown from £200 million to £600 million and...

Sir: Man Watkins's passing reference (14 April) to the recent agriculture price review as 'ludi- crously lavish' would suggest that he has little knowledge of the vital role...

Sir: It's a deceptively simple and beguiling idea that there is nothing wrong with our prison system that criminals themselves can't cure through de- sisting from crime (Mr...

Sir: in your issue of 14 April (p. 421) John Rowan Wilson commented on the surgery appropriate to varicose veins, explaining that the cause was to be found in the giving of...

Sir I am grateful to Elizabeth Jennings for trying to do as much justice as she can to Charles Morgan (SPECTATOR. 7 April) and not to fall into hurried. prejudiced judgments....

Sir: Auberon Waugh. in his very lively article about education, seemed to me to miss the main point for private education—that its content as well as its form is independent of...

he writes there is always at least one sentence or paragraph of supreme irrespon- sibility or carelessness. He begins his review (21 April) of William Manchester's Kennedy book...

Letter to my son

Sir: As one of your younger readers fascinated by the fluctuating voices of experience speaking on 'Letter to my son,' may I ask your middle- aged readers a question? It begins...

Sir: A postscript to the correspondence about Simon Raven's letter

to his son: 'Children aren't happy with nothing to ignore And that's what parents were created for.' (Nash) I. F. Freeman British Embassy, Addis Ababa, Ethiopia

JOHN WELLS In order to reassure those who believe every- thing they read in the papers. I should perhaps say by way of introduction that the following document, found blowing...

Sir: Mr Giles Playfair (14 April) is mistaken if he thinks that London Transport is introducing auto- matic fare collection on to the Underground solely because it is 'obsessed...