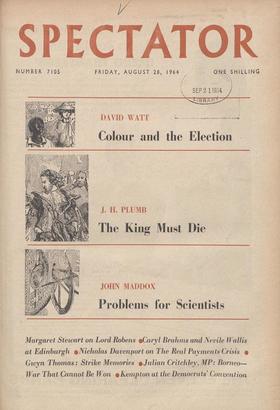 Colour and the Election

The Police and Us

I T is a delusion for the Home Secretary to hope that, by inactivity and the simple passage of time, the police will be restored to the position in our confidence that they held...

THE US ELECTION SCENE warmed up, with the Democrat Convention

in Atlantic City heralded by threats of racial riots and by publication of the Johnson family accounts, showing a fortune of Just over CI million. Meanwhile Mr. Robert Kennedy...

Father of the SPD

DAVID FOOTMAN writes: On August 28, 1864, Ferdinand Lassalle, aged thirty-nine, was mortally wounded in a duel on the outskirts of Geneva, and died three daYs later. Son of a...

Lord Robens and his Problems

MARGARET STEWART writes: The National Coal Board's accounts, just pub- lished, show that the Board just about broke even financially in the fifteen months which ended in March,...

Colour and the Election By DAVID WATT T wo weeks ago the Birmingham Planet, a newspaper owned by Mr. Woodrow Wyatt, the Labour MP for Bosworth, carried an article, Prominently...

The War That Cannot Be Won

By JULIAN CRITCHLEY, MP HIS is a war that may well last for ten I years.' Such is the view of a senior British officer in Borneo. If his forecast is only half right, then the...

From MURRAY KEMPTON ATLANTIC CITY e Democrats gathered with no question left unsettled for them except the name of their Vice-Presidential candidate. A majority of their...

Spanner in the Works By RANDOLPH S. CHURCHILL A MEETING was held on Monday in London between representatives of the National Federation of Retail Newsagents and representa-...

Problems and Chimeras for Scientists

By JOHN MADDOX E ACH autumn the British Association pitches its tents at the gates of one British city or another. This. year they are at Southampton. Nobody really knows...

Warm and wan congratulations to Worcester - shire on winning the County Chamiiionshir. Warm because they've proved themselves this season to be the best team in the...

One of the first issues in the general election turns out to be whether coloured immigration should be an issue at all. Reports from Midland and London constituencies make...

I RARELY comment on par- ticular TV programmes. Normally I stick to simple and widely accepted gener- alities such as 'The BBC must go.' But a recent re- view of ten years of...

Stand up, that Marquess!

From the Daily Express of August 24: OFFER The Marquis of Whitby, who has bought a disused radar station on his estate at Mulgrovo Castle, in North Yorkshire, is offering it...

There will be no more by-elections here before the general election. We can, however, watch the progress of the Arundel and Avondale by- elections in Southern Rhodesia. Arundel...

In Times of Trouble By GWYN THOMAS F VEN around my cradle I seemed to detect 1L1 angry fists and raised voices._The miners and their masters had elected to tear the entrails...

Publish and be Damned

By CHRISTOPHER HOLLIS The Oxford and Cambridge Schools Examination Board has threatened to take legal action against anyone publishing without permission a survey based on its...

ECHOES OF A REPORT-4

Moving Forward, Looking Backwards By STEWART C. MASON T HE best thing about the Newsom Report was its timing. It contains only one major recom- mendation, major in the sense...

SIR,—Mr. Quentin de la Bedoyere should realise that the Bishop

of Southwark identified the Church of England with the Church of St. Augustine because he was bound to do so. The Roman Catholic Church in this country today is a later mission...

Sta,—I did not refer only to direct money grants from

Parliament. 1 admit frankly I thought such support was given, but the receipt of several letters this week, some polite, but others more abusive, has left me better informed!...

historians with regard to the fifty-year rule offers them little comfort. If. with even the present fifty- year rule in force. Cabinet records tend to be in- scrutable; if...

SIR,—Who is to blame for the mythology and mis- understanding, the extravagances, the climate of non- co-operation—the general absurd situation which has fooled critics of the...

incredible that the Turks in Cyprus would initiate hostilities against an overwhelming majority and wreck a highly favourable constitution. The answer is simple: the Turks,...

SIR,—The publication of General Gorbatov's memoirs in an amputated form

(The Black Years— reviewed in the Spectator of August 14) demon- strates once again the unsatisfactory situation created by the USSR not being a signatory to any of the...

SIR,—It has been decided by the Government of India to hold a special exhibition about the late Prime Minister Jawaharlal Nehru which will attempt to show his contribution to...

SIR,—S0 that bog-trotter O'Brien has taken time off from brawling in pubs and assaulting harmless passers-by, shaken the pig off his lap, and given over his idolatrous popish...

SIR,—Mr. Vaizey's latest article on the Robbins Report is like

a bulletin announcing a victory. Public opinion, he points out, is now increasingly on Lord Robbins's side, one may have a few 'legitimate' doubts about some of his recommenda-...

SIR,—Since Mr. Graham Hough appears neither to like anthologies nor

to believe that American litera- ture is worth teaching, it was hardly to be expected that he would welcome my book American Literature. It was nice.of him, of course, to say...

Sia,---While admitting the achievements of American writers, in his review

of Professor Moore's anthology American Literature (Spectator, August 14), Mr. Hough hates to think of anyone, certainly not the English universities, making what he calls 'a...

By CARYL BRAHMS The Edinburgh Festival: Henry IV (Theatre Workshop); Hamp; The Oxford Revue. NOT Hazlitt nor an in- carnadine of critics and commentators down the ages can...

By MALCOLM RUTHERFORD The Persecution and As- ii, 4 14■111 el." sassination of Marat. (Aldwych.) — Camelot. (Drury Lane.) Marat is magnificent. With it the Royal Shakespeare...

NOT only Berlioz's com- pany makes Eugene Dela- croix at home in Edin- burgh. The portico of the Scottish Academy, sur- mounted by a youngish Queen Victoria exotically supported...

By HANS HELLER IT was the most curious start to a season I can re- member. The same crowd which, last season, almost barracked their own re- serve captain (Marchi) out of...

The King Must Die By J. H. PLUMB W IEN Charles I was hurriedly taken by the Army in November, 1648, to Hurst Castle, a grim fortress on a spit of shingle that runs out into...

If I Had Ever Loved

my mother, or kissed my brother, or married a man who stood for my father; or if I couldn't, or didn't want to, there would still be between us as we carry life, sprawled...

The Conquest of the Masses

Nazi Propaganda. By Z. A. B. Zeman. (0.U.P./Wiener Library, 35s.) POWER has been ,construed in the past in, eco- nomic and military terms. The French Revolution introduced a...

ONE of the reasons why Beckett's novels have not so far had the attention they deserve is that there existed no introduction to works which, for many potential readers,...

The New Sociology: Essays in Social Science and Social Theory in Honor of C. Wright Mills. Edited by I. L. Horowitz. (0.U.P., 58s. 6d.) THIS book is meant to be both a monument...

of instances of works of art being rewritten after their first appear- ance and their acceptance by the critical public. Thus Evelyn Waugh has recently been making minor...

Back to the Moderns?

IN the field of little-magazine publishing in Britain, the most solid success in recent years has certainly been achieved by The Critical Quarterly. The current number, which...

MOST people think psychoanalysts are irrespon- sible crackpots. So it stands to reason that Dr. Bauer must have stabbed the patient found dead on his consulting-room couch....

EVER since the Obscene Publications Act and the Chatterley trial, the resulting relaxation of the censorship seems to have gone to the head of the average novelist: so much so,...

The Real Payments Crisis By NICHOLAS DAVENPORT WHEN is a balance of pay- ments crisis not a crisis? The answer seems to be when it is a 'maudlin' crisis. (Sec the definition...

By LOTHBURY DOINTS emerging from the review of Nebanga r Consolidated Copper Mines (an extract from which was reported in last week's issue) by the chairman, Mr. H. F....

The House that Jerry Built By . LESLIE ADRIAN BETWEEN them the • builders and the estate • agents have made house purchase a heads-we-win, tails-you-lose proposition for the...

Machine for Not Living

By MARY HOLLAND EVEN as I write, the .resi- dents' lounge, the whole hotel, and I should think a goodly part of Edin- • burgh, reverberate to the , all-out beat of the five-...

By ALAN BRIEN It is the Village of Dreadful Joy. Immorality here appears so cheerless and painful and costly that only the most fanatical of good-timers can hope to emerge...