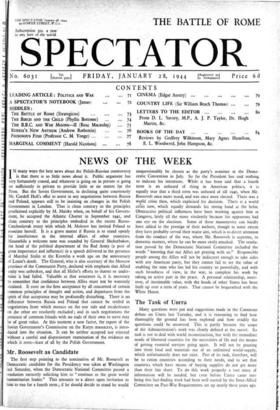 The Task of Unrra

Many questions were put and suggestions made in the Commons debate on Unrra last Tuesday, and it is reassuring to find how thoroughly the ground has been explored and how...

N many ways the best news about the Polish-Russian controversy I is that there is so little news about it. Public argument has very fortunately ceased, and whatever is going on...

The first step pointing to the nomination of Mr. Roosevelt as Democratic candidate for the Presidency was taken at Washington last Saturday, when the Democratic National...

Argentina and the Axis

It was only after most careful inquiry and consideration that the United States and British Governments decided not to recognise the revolutionary Government of Bolivia. In this...

The agreement signed last week by Australia and New Zealand is a wise and timely definition of the present and future 'relations between the two Dominions and of their attitude...

The debate in the Lower House of the Convocation of Canterbury• on the South India scheme for church union showed that the Arch- bishop was right when he said that the proposals...

The debate on the Government's much-discussed " pledge to the farmers " on Wednesday caused Ministers less embarrassment than was expected, and it was not necessary, after all,...

T HERE have this week been some salutary reminders that the war is not won yet: Sir johii Dill has sounded that note in Detroit, Sir Stafford Cripps and Mr. Dingle Foot, the...

T HE Deputy Prime Minister was on Wednesday invited by an M.P. to assure the House that our bombing campaign against German centres of production will be further intensified,...

THE BATTLE OF ROME

By STRATEGICUS T HE landing south of Rome has gone so well that we may be tempted to take the intention for achievement. This is the easier the more we examine the antecedents...

THE BIRCH AND THE CHILD

By PHYLLIS BOTTOME W HETHER the public are more easily shocked by severity because they are less responsible for order, or whether the consciences of Authorities are more...

By ANDREW ROTHSTEIN * T HE new Soviet national anthem, which this country heard for the first time on Sunday week, is of interest not only in itself but also for the comments...

By PROFESSOR C. M. YONGE I N the multiplicity of weapons and devices for attack and defence Nature long anticipated the ingenuity of man. Only in his use of explosives and of...

By HAROLD NICOLSON FOREIGN statesman recently indulged in an epigram which A is worth recording. " The British people," he said, " are the most generous on this earth. It...

COUNTRY LIFE I RECEIVED this week the little " quarterly

" of the admirable Produce Association of the county, and it seemed to me a model of condensed information. On the same day some figures reached me concerning this association....

I mouGirr I had sweet Fortune in my hands, Caught in my back-yatd, playing, unaware ; But it was only Luck was in my grasp, Indulging in his hundredth soiled affair. DENTON WELCH.

Lost Angel." At the Empire.—" Happy Land." At the Tivoli. Lost Angel and Happy Land are significant straws in the Hollywood wind. Each to some extent derives from The Human...

Snt,—It is salutary that Professor Brogan should bring before us

so vividly the cross-currents of American opinion on the Polish issue, but an English• observer may be permitted a melancholy smile at the turn affairs now appear to be taking....

SIR,—I should not presume to set myself up against Professor

Brogan's knowledge of American politics, and he is no - doubt right that in the course of this year the sympathies and prejudices of Polish voters in the United States will...

LETTERS TO THE EDITOR. SIR, —The United Nations are passing, at this moment, through the gravest political crisis which has occurred since the outbreak of war. The whole...

Sot,—It would -b dreadful if. we ever secured a Church in which every- body agreed about everything. -Fortunately, as Mr. St. John- Ervine wittily- points out,- it is quite...

Sot,—Your readers must be very grateful to you for the

fine lead you have - given them in your two leaders on the Russo-Polish dispute. You have strengthened our self-respect, which has been badly shaken by the attitude of our Press...

Sts,—Mr. St. John Ervine has expended a great deal of

eloquence in impressing upon me the self-evident fact that widely differing views are held on Christian doctrine. Of course they are—quot homines tot sententiae. But that is no...

Sus,—It is perhaps typical of youth's interest in politics that an admirable article by an ex-President of the Oxford University Conservative Associa- tion should straightway...

Sut,—From my observations, as a municipal librarian, I think Elizabeth Dunn's readers cannot be representative of women as a whole. Although there may be a slightly greater use...

SIR,—At the wish of Mrs. Mon and by arrangement with the Stud Christian Movement Press, I am assembling material with a view writing Dr. Paton's Life. I should greatly value...

SIR,—As a New Zealander I was very interested in Mr. P. A. Rossiter's letter, "A World Lesson," in The Spectator of December 31st. Unfor- tunately, the example selected is not a...

Stk,—In regard to " spillage," pilloried last week by " Janus," it is pity that the word spilth is now labelled "archaic." All readers of The Spectator will appreciate the...

GEORGE IV AND CHARLES I

Sta,—In your issue of January 14th, Mr. H. R. Shaw suggests that George IV was at heart "a straighter man than Charles I," and " Janus appears to concur with what I can only...

SIR,—Your review by W. J. Turner must be of prime interest to those of us who took degrees as late as the opening of this century in English Language and Literature. At...

Religion in Russia THE relations between the Russian Orthodox Church and the Soviet State have been governed by two separate but complementary factors. One was the historical...

ST. GEORGE SAUNDERS took, on his first visit to the United States, two qualifications ample enough to offset the fact—in general a very serious minus in war-time—that it was his...

THESE two anthologies of Russian poetry cover the same period of, roughly, a hundred years, from Pushkin to Blok. Mr. Bowra's selection is considerably the longer and includes...

Prime Ministers and Others

THIS slight supplement to Lady Oxford's Autobiography is less like a book than a conversation recorded on a dictaphone : on the whole, a gay conversation, wandering from point...

THE writer of this instructive and entertaining little book justifies its publication in advance by pointing out that while the future barrister is required to post himself in...

The Cornhill. (John Murray. 2S. 6d.) THIS month sees the first issue of a new Cornhill under the editor- ship of Peter Quennell. Both editor and publisher are to be con-...

MR. LANCELOT HOGBEN is fast qualifying as Public Crank No. After his Mathematics for the Million, a sort of assimilable mathe- matical margarine (whose lack of vitamins was...

• IN this brilliant book the well-known archaeologists, Mr. and Mrs. Hawkes, have told the fascinating story of Prehistoric Britain, that is Britain from the Palaeolithic and...

for one guinea will be awarded to the sender of the first correct iunon of this week's crossword to be opened after noon on Tuesday week, t ■u ary 8th. Envelopes should be...

SOLUTION TO CROSSWORD No. 253 SOLUTION ON The winner of

By J. R. Norman.—A Book of Lilies. By Fred Stoker. The Bayeux Tapestry. (King Penguin. as. each.) The Poets' Corner first appeared nearly forty years ago. Published in an...

The date of the annual meeting . of the Midland Bank January 27th, not, as inadvertently stated in last week's Special January 19th. wag. or,

THIS book differs from most autobiographies in describing obj rather than people and in the serene quality of its happiness. " Such sober certainty of waking bliss I never...

Ground Staff. By Squadron-Leader A. J. Brown. (Eyre and Spouts. woode. ios. 6d.) IT is difficult to write about the RAF without being obvious, and Squadron-Leader Brown, who is...

story of the Merchant Marine, an elaborate and sophisticated descendant of the ballad, belongs to a good tradition and retains , the three essential qualities of the...

6d.) THERE are many approaches to town and country planning. Mr. Escritt, deprecating the architectural approach, claims for planning the status of a deductive science based on...