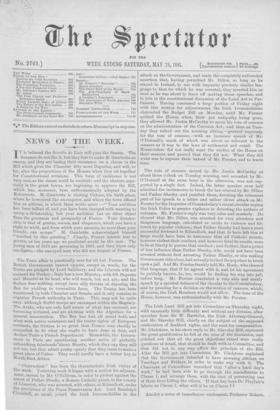 The Tunis affair is practically over for all but France.

The British Government cannot oppose, except in words, for the Tories are pledged by Lord Salisbury, and the Liberals will not , contend for Turkey ; Italy has a new Ministry,...

T T is believed the Scrutin de Lists will pass the Senate. The Senators do not like it, but they fear to make M. Gambetta an 'enemy, and they are basing their resistance on a...

Amidst a scene of tumultuous excitement, Professor Robert.

son Smith has been condemned by the Assembly of the Free Church of Scotland as an unfit theological instructor for their Clergy, by a majority of 178 (423 against 245 votes)....

The vote of censure moved by Mr. Justin McCarthy at

about three o'clock on Tuesday morning, and seconded by Mr. O'Donnell at the same hour in the afternoon, was not sup- ported by a single fact. Indeed, the latter speaker even...

* * heEditors cannot undertake to return Manuscript in any

" Obstruction " has been the characteristic Irish virtue of

the week. Yesterday week it began with a motion for adjourn- ment, moved by Mr. O'Sullivan, in order to protest against the arrest of Father Sheehy, a Roman Catholic priest, in...

The Irish Land Bill got into Committee on Thursday night,

with unusually little difficulty and without any division, after speeches from Sir W. Barttelot, the Irish Attorney-General, and Mr. Staveley Hill, chiefly ou the subject of the...

Prince Alexander of Bulgaria has defined the fundamental laws which

he asks the " Great National Assembly," or Constituent Assembly, as we should say, to enact. They are three in number. By the first, the Prince is enabled for seven years to...

Yesterday week, on Mr. T. Collins coming to the table

to take the oath and his seat for Knaresborough, Sir Wilfrid Lawson attempted to intervene, but was ignored by the Speaker till after that ceremony was over. Then Sir Wilfrid...

The Turks have signed a convention under which Greece will

take possession of Thessaly, by a series of movements which must be completed before November l st, aud Mr. Gosehen re- turns home. He declined, it is now publicly stated, the...

The Preston election has turned out badly for the Liberals.

On Thursday, Professor Robertson Smith having refused to resign, Dr.

Adam moved a resolution that from the 31st of this month, " Professor Smith's tenure of his Chair shall cease, as regards all right to teach and to exercise Professorial func-...

It is not impossible that the United States may be

bitten by the annexation fever. The people are greatly moved by the- prospect of the Canal through the Isthmus of Panama, and. both Houses at Washington have passed resolutions...

The Jews all over Europe are pressing the Governments to

intervene on behalf of their kinsmen in Russia. A depu- tation of British Jews waited on Lord. Granville on Tues- day to press this request, and were very kindly received. Lord...

Mr. Dillwyn amply justified on Wednesday the character for sagacity

and shrewdness in getting his measures through the House of Commons, for which we recently gave him credit, when he carried the second reading of his Lunacy Law Amend- ment Bill...

The King of Italy, after desperate efforts to induce the

Liberal groups to support either S. Cairoli, 3. Parini, or S. Sella, has at last formed a Ministry of Affairs, headed by SS. Depretis â¢ and Mancini. It is believed they will...

Convocation would do better not to meddle in matters which

do not concern it. The Lower House of Convocation of the Province of Canterbury has passed a gravamen against any relaxation of the oath of allegiance for persons seeking admis-...

The trial of Herr Most, editor of the Freiheit, for

publishing " scandalous libel," inciting to murder foreign Sovereigns, and other counts, ended on Wednesday in a verdict of guilty. The jury, however, added a recommendation to...

It is pretty evident that Mr. Gladstone has been considering

a conversion of Consols. lie was asked about it by Mr. Whit- worth on Tuesday, and made a reply deprecating the idea that such an operation was to be looked for immediately. He...

We regret deeply to notice the death of the Right

Hon. W. P. Adam, Governor of Madras, which occurred on May 24th, at Ootacarnund. Mr. Adam had been from 1853 to 1858âthat is, through the great Mutinyâprivate secretary to...

BAITING THE IRISH SECRETARY. O NE of the worst results of a Coercion Act is that it opens the way for false patriots to get themselves a patriotic reputation, by personal...

THE ELECTORAL REVOLUTION IN FRANCE.

the law is established by " the vote of France," and the minority is as unheard and has as little influence as if it were dead. That, M. Gambetta says, is the right system, the...

W E hardly remember any time during the last forty years in which there has been so general a despondency as to the politics of the future as there is now. This is natural...

T HE Pall Mall Gazette may be right in intimating so broadly that a financial crash is at hand, but we ques- tion if it indicates forcibly enough the true source of danger,...

M R. COURTNEY is making rapid progress in the dis- charge of Under-Secretarial functions. There was no trace of the old leaven in his speech on Mr. Dillwyn's Lunacy Law...

T T is an unavoidable misfortune, but still it is a misfortune for England, that a politician who does not speak well never quite obtains his fitting place in the public eye....

T HE "Westminster Confession" is not the sort of document on which we should like to see any Church based now-a- days. Doctrinally, it appears to us as nearly a travestie on...

W E never can help pitying Princes, especially English Princes,âthey are so mocked with the appearance of dignity in the world. They have, next to the Sovereigns, the highest...

A FABLE FOR THE WISE.

A ND all created things rebelled against Man. He had come among them, they knew not whence, with a com- mission to rule them ; and they had discovered that among them all, ho...

THE FUTURE OF THE RED INDIAN.

W E notice elsewhere the accusation of neglect, and even of wrong-doing, in the matter of the Indian Tribes, which an American lady has brought against the Government of her own...

MR. GLADSTONE ON THE LAND BILL. [TO TRH EDITOR OF

THE n SPROTATOR.1 Std,âPermit me to give the answer of the senior Judge of the Landed Estates Court to your query of Saturday,â" Did the Laud Act of 1870 lower the value of...

THE PRIVY-COUNCIL JUDGMENTS. [TO TER EDITOR OF TRH .SPROTATOR."1 Sur,âPermit me a few words, to explain better why I bring so heavy a charge as predetermined fraud against...

THE GROSVENOR GALLERY. LSECOND NOTICE.] LET us in this notice try and sketch some of the leading peculiarities of this year's Grosvenor Gallery exhibition. An enormous number...

DR. FRASER'S " BERKELEY."* To say that Professor Fraser is thoroughly master of his sub- jectâthat the successive steps in the progress of Berkeley's mental history have...

A VISITOR to a flower-show, describing a particular rose he has seen there, may perhaps speak of it as not tea-scented enough to please him, or say that its shade of colour is...

THE OTHER HALF OF THE WORLD.*

FEW books ever succeeded better in answering the purpose f or which they were written than this unassuming little volume; The Other Half of Ma World. By Mrs. LA? ward Liddell,...

is a curious and pro- voking mixture of success and failure. In parts it is so interesting, that the reader will be unwilling to lay it down ;: while, at the same time, it is so...

A CAVALIER'S _NOTE-BOOK.* Tuts book is full of deep interest,

and its appearance is peculiarly appropriate at the present time, when, in a neighbouring country, penal laws are once more being put in force against the Jesuitsâ laws which,...

THE ABORIGINES OF NORTH AMERICA.*

THIS book treats . of a question which concerns the Govern- ment of the United States, and them alone. Wo are not quite sure also whether the author has made the best use of her...

ECCENTRIC WILLS.* Tuts rather bulky volume has been compiled for

the amusement of the public, and there can be no doubt that it contains a good many amusing passages. The book, however, is one which few readers will be courageous enough to...

Tho Theory of Logic. By Carveth Read. (C. Kagan Paul

and Co.) âA book, this, for time thorough-going student of the art or science of logic, a science, indeed, so difficult, that wo may be pretty sure wo shall never bear the...

â¢ Beside the River. By R. S. Macquoid. (Hurst and

Blackott.)â The scene of this story is laid in Belgium, and it contains some pleasant descriptions of country and country life there. But the plot is a very old one. The hero...

The Dublin Review. April. (Burns and Oates.)âThe theological element is not so overpoweringly strong in the Dublin Review as in old days, and, for the general reader at least,...

Philosophy, Historical and Critical. By Andr6 Lefbvre. Translated by A.

IL Keane, B.A. (Chapman and Hall.)âThis is a survey of the various philosophical systems, from Thales to Comte, Mill, and Spencer, from the point of view of an advanced...

The Evolutionist at Large. By Grant Allen. (Chatto and Windus.)

âMr. Allen finds illustrations of the theory of evolution in common things of every-day occurrence, the tail of the bird, for instance, indicating the tail of the reptile from...

Pay-Hospitals. By Henry C. Burdett. (Churchill.)âThe author of this work

shows himself perfectly competent to deal with the sub- ject of the utility and precise scope of pay-hospitals. His advocacy of certain changes in the present mode of managing...

Observations on the Construction of Healthy Dwellings. By Douglas Galton.

(The Clarendon Press.)âWe cannot do more than generally commend this book to all readers who are interested in tho subject, or as this is too wide and, in fact, includes every...

The American View of the Copyright Question. By Richard Grant

White. (Rontledge.)âThe "American view" seems to us a little un- practical. Mr. White says in effect, " Abolish all Copyright Acts, and trust the author's property to the...

Cathedral ; and it has been a labour of love with him to collect records and memorials of the splendid building, excelled and even equalled by very few churches in Europe, which...

is evidently already beginning to rival the mother-country in ono branch at least of production, that of tho novel. Policy and Passion might have been written by one of the...

Our Sons and Daughters. By Ernest Lemma. Translated by Emily

Mills. (Romington.)âWe aro much obliged to Miss Mills for introducing to English renders these very pleasing " Scones and Sketches from Family Life." The first story, "Two...

Not Many Years Ago. By an Elderly Bachelor. (ffemington.)â Taking

it for granted that these " Memories of My Life," as they are called, are veritable recollections of fact, we may say that they are interesting. There are some curious details,...