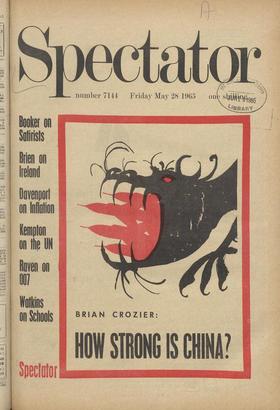 T rir HE unkindest thing to say about the Prime Minister's EFTA summit meeting is that he has caught up with Conservative thinking of about five years ago--or perhaps with...

— Portrait of the Week- IHE GOVERNMENT CLIMBED DOWN on the

Race Relations Bill, the Lords climbed down to avoid a clash with the Commons over Burmah Oil, there were even some minor concessions on the Finance Bill: but for all that it...

DREW MIDDLETON writes from Paris: It is all so familiar. The practised gestures. The move into the crowd to grasp eager hands. The speeches; all essentially the same with their...

`Yes' to Comprehensives DAVID aooras • The Art of Caricature OSBERT LANCASTER One year's subscription to the'Spectata:13 15s. (including postage) in the United Kingdom and...

The UN's Last Deserter MURRAY KEMPTON writes from New York: Those persons—and they are almost all Americans—who still cherish some hope for the United Nations have the...

iIII,ARY SPURLING writes: `Acting, handicrafts, lectures, yes, But best of all the togetherness,' runs the rhyme of the • Women's Institutes, who were gorging their fill of...

Those three bugbears of the British press— libel, contempt of court and the Official Secrets Acts—are the subject of a report by a working party, which `Justice' set up a few...

Once upon a very long time ago . 1 used to play tournament bridge. For many years now I have played virtually no bridge at all: three times in five years, to be exact. But it is...

J FORCE WOODCOCK replying to Nigel Lawson on the TV programme Gallery gave an answer equally remarkable for its fuzziness of words and its clarity of intent when he was asked...

The Prime Minister is adepteat emitting smoke- screens, but it is to be hoped that Mr. Bernard Braine will press his demand for a full inquiry into the affair of the lost...

One convenient aspect of the Finance Bill (con- venient for the Government, I mean) is that its fearful complexity has successfully concealed much of its meaning from the...

Me and Jim I think I will join forces with

J. L. Manning of the Daily Mail. After all, he once joined forces with me when he stood as the Tory candi- date for Enfield East. The immediate cause of this new alliance is...

• How Strong is China?

By BRIAN CROZIER T ItE, vicious energy expended by the Chinese Communists in attacking the American bombing of North Vietnam has been balanced by a singular reluctance to help...

'If I had been the Headmaster I would certainly have punished myself for such an offence, but it was the Headmaster's decision and he decided to let me off.'—Letter from a...

The Satirists Move On

By CHRISTOPHER BOOKER I N the coloured photograph on the cover of their first LP, the Beatles looked quite different from one another. But by the time, less than a year later,...

The Unmaking of a Prime Minister

By A. M. GOLLIN F IFTY years ago this month there took place one of the decisive events of British history: the formation of Asquith's coalition government in May 1915....

The War That Had To Be

SIR,—Alan Bullock wrote, 'Even in 1939 Hitler did not deliberately plan a European war.' Yet, in an issue of a magazine published exclu- sively for and by the German navy, I...

StR,-1 am tired 'of pulling Mr. Isherwood's leg; he is

much too earnest about this subject of racial superiority, and the kinds of half-truths and mis- information he trots out as conclusive arguments in support of his case lead me...

SIR,—Your correspondent H. B. Isherwood apparently believes that as negroid brains bre smaller than those of Europeans interbreeding should be discouraged if not made illegal....

Sta.—How misguided, how cussed, how disobliging 'of the Poles. Yugoslays and Russians to have fought on the same side as ourselves during the last war! Had they only shown more...

Sta,—Some of the staunchest supporters in this country of the policy of intervention in the Domini- can Republic now concede that the administration may have overstated its...

SIR.—Naivetd is, so far as I know, no sin. Nor in our day is debt. But in asking my question about department stores, I intended not to advocate on-the- cuff extravagance, but...

SIR,—With reference to the review of Ward 7 by Valeriy Tarsis which appeared in last week's Specta- tor, and knowing well the Russian text, I wish to state that the English...

MPs had a parliamentary ticker-tape in the crush' room) into

something more disseminated and at the same time better rooted. Although biography is miles removed from • - the composer of Wozzeck have fared if not finan- cially helped as...

All the same, Word of Mouth is worth read- ing

just for the laughs. The theatre people talk like Blanco Posnet--the same corny apostrophic earnestness; and the dialogue is often as crackly and smarty-pantsy as Bob Hope's....