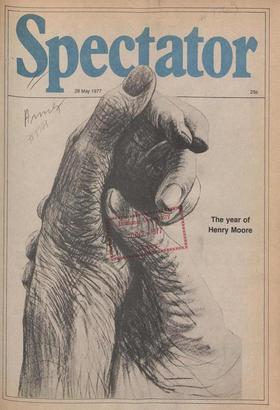 The behaviour of the Daily Mail over the Leyland affair is as gross a piece of scurrility and incompetence that British journalism has seen for a long time. To say mat it was...

Mr Mason's chance to shine John Grigg The collapse of the Protestant hard-liners? strike in Northern Ireland earlier this month was, of course, a triumph for Roy Mason and a...

The only way in which the Daily Mail's gullibility over the Leyland forgeries can be e xplained is that David English, Stewart Stevens and others' suffered a willing su spension...

Take his hat and his Levy Auberon Waugh Mr Graham Greene once wrote about his school days at Berkhamsted: 'Appalling cruelties could be practised without a second thought; one...

The change in Spain

Richard West Barcelona Arriving in Barcelona to write on the general election, I am struck by the change, nu t so much in Spain itself, as in the way it c ompares with England....

Taki Theodoracopulos Monte Carlo Penned to the water's edge by the Alps behind it, huddled around the polluted grey harbour and scrambling upward for extra space, the...

Nicholas von Hoffman Washington The news this week has been revolving around our metastasising technology. In New Hampshire 1400 peoplesubmitted themselves to arrest in order...

'What are we going to do about Scotland', Mr Harold Macmillan used to ask Scottish Conservative MPs after his electoral triumph of 1959. He was not thinking of the threat of...

Grace Wyndham Goldie So the great broadcasting debate has begun. Last week in the Lords: this week in the Commons. Lord Willis, in the Lords, dismissed Lord Annan's two and a...

The big one Jeffrey Bernard This is the last time we shall meet, so to Speak, before the Derby. I wus expecting some information from France, but all I've had so far is an...

A new capitalism Nicholas Davenport An important book has arrived from America — a plan to provide every American family with a $100,000 stake in the economy*. It is not a...

Sir: Your editorial about our Foreign Service (Dignified or efficient?, 7 May) is stimulating, but I wonder whether you have got the priorities right? Many of our embassies are...

Sir: Your correspondent Christopher Wordsworth (21 May) not only makes an unjustified attack on Richard Ingrams, but does so from the address of his club, which I have always...

Sir: Commenting on the moral hypocrisy of politicians, Mr Stanton (21 May) refers to President Carter's supposed 'impartiality' on universal 'human rights' as a modern...

Sir: I understand and appreciate the point Mary Renault is making (21 May), but not her complaint against me. As I made clear (Spectator, 23 April), I was reviewing 8 , book...

Sir: As becomes a traditional Rabbi, HYa la Maccoby (7 May) rejects the historica l reality that the Jews precipitated the crucifixion and, hence, the claim evangelium. His...

Freud and anti-Freud Hans Keller Karl Kraus and the Soul-Doctors: A Pioneer Critic and his Criticism of P sychiatry and Psychoanalysis Thomas Szasz (Routledge & Kegan Paul...

A letter to Peter Jay

Anthony Holden Dear Peter. I've just been reading Geoffrey Moorhouse's new book on the Foreign Office*, and you were constantly in my thought's. There's a lot of stuff about...

Christopher Booker Darwin and his Flowers Mea Allan (Faber and Faber £6.95) Shortly after arriving at Shrewsbury Scho01 in the early 'fifties, I developed a reputati on as a...

Michael Wharton Linguistic Minorities in Western Europe Meic Stephens (Gomer Press, £9.50) In London just before the last war, when I was trying to learn Welsh, many shops...

Peter Ackroyd The Ponsonby Post Bernice Rubens (W H. Allen E3.95) When, in Bernice Rubens's latest novel, a plane is called 'Progress' and when that plane actually crashes on...

A Binder for the Spectator

You can bind your copies of The Spectator week by week in a special binding case, with stiff dark blue covers and gilt-lettered spine, designed to hold twenty-six copies. Price...

Benny Green The fields of War Edited by Philip Warner (John Murray £5.95) Takeit that the British Empire disappeared in the mud of Flanders. Take it also that the reason why...

The public Moore John McEwen Henry Moore will be eighty next year, London will be his as the Orangerie is now in Paris. He has become an institution. Moore, OM — the...

Bryan Robertson I Moore is just about two years older than the century, and the big bronze 'Sheep Piece' which commands its own presence in the forthcoming Battersea Park...

Energy boom Ted Whitehead Variations on The Merchant of Venice (New Open Space) Four to One (Cottesloe) A few weeks ago I went to see Charles • Marowitz at the new Open...

Not this year Rodney Milnes Strauss, as we all know, is the Meyerbeer.of the twentieth century and by now ought to be lying down and dying. Not this year he isn't: Elektra at...

Vacuous Richard Ingrams Ever since his controversial appointment to the British Embassy in Washington I have been tryin g to catch my friend Peter Jay in his award-winning...