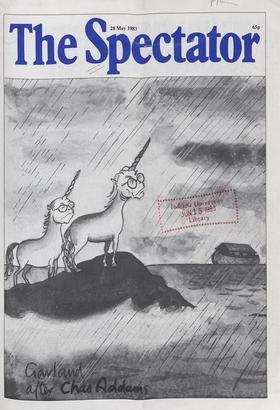 T n some respects the most endearing, and .1.conceivably the most popular, figure in Labour's campaign has been Mr Foot's dog, Dizzy. Whenever this redoubtable ter- rier spots...

T doubt if the electorate either knows or I cares whether Mr Steel is right when he says that food prices have risen by 45 pence in the pound during the past four years of...

Is Calvocoressi mad? Auberon Waugh I t must be a horrible job to edit an intelli- gent weekly magazine at this particular moment. Polite convention requires that one should...

Charles Moore I t may not be polite to discuss the physical attributes of politicians, but they are the first thing you notice when you see them in the flesh. As Mrs Thatcher...

Superstars and dogstars Paul Johnson M ichael Foot remarked sadly on television the other night that the days of proper election speeches, giving a com- prehensive analysis of...

Tim Congdon U ntil 1979 all post-war governments failed to achieve their economic objec- tives. The problem of how to -reconcile financial stability, as indicated by the infla-...

A higher form of apathy

Shiva Naipaul M y electoral record is suspect: I have faced a ballot box only once in my life — and that in a local council election. Somewhat irresponsibly, I helped put a...

Geoffrey Wheatcroft Downpatrick, County Down T he bookmakers' adverts for election betting in the Sporting Life include the small print: 'For the purposes of this bet Northern...

Richard West Bristol T uesday was International Women's Day of Disarmament; also Wesley Day, which was marked at the world's first Methodist Church here in Bristol. The an-...

James Hughes-Onslow rr here was a short respite from election 1 news last week when that mysterious pilotless executive jet from Vienna flew across Scotland and plunged into...

Who owns the Victorians?

Peter Ackroyd A young woman from City Limits opens the discussion: 'Don't be afraid to speak from your own experience . '; the meal provided is a sausage roll, apple and glass...

The price of Mitterrand

Sam White Paris T he second anniversary of the Mauroy government in France has come and gone in an all-pervading gloom, of which, interestingly enough, the Socialists...

The price of milk

Patrick Marnham San Salvador, El Salvador T he waiter's conversational manner was pointed. 'Are you extraneous,' he said, 'or are you of this place?' 'I am extraneous.' 'I...

Roy Kerridge H aving already seen Carry On Up The Khyber it would be over-egging the pudding if I were to see the award-winning film Gandhi as well. To judge by adver-...

The view from Twisden Rd

Duncan Fallowell uddenly A.J.P. Taylor is 77, so here is 1...3 the autobiography (reviewed on page 28) urged upon him by many colleagues, as were all his books bar one. Here...

The motion on Tuesday for adjourn- ing over the Derby Day was moved by Sir Heron Maxwell, in a very dull speech, in which, of course, he appealed to the authority of Lord...

Sir: I was distressed to read that the `abysmal' Taki (so described by G. E. Beswick, Letters, 30 April) had espoused the cause of the 1,500 or so desperately worried British...

Sir: It's hard to demur at so genial a critic as George Gale; but some of his asides in reviewing Postwar (21 May) really won't do, Hitler's and Napoleon's conquests did not...

`Political' interpretation Sir: You were quite right to draw attention in the 'Notebook' (21 May) to my refer- ences on the Channel Four programme Right to Reply to the...

A liking for abroad

Sir: Whoever your correspondent, Myles Colshare, was writing about in the Spec- t ator (Letters, 14 May) he was certainly not Wr iting about me. I have never ever said that 1...

Sir: I was stirred to see in print in your letter columns (14 May) the words of the song, 'The 'Baby's name is Kitchener Carrington' which I was taught to recite uncomprehen-...

Sir: As expatriate OAPs anticipating a return to the UK in the not too distant future, my wife and I are overjoyed to learn that the EEC are insisting that Britain should reduce...

Francis King King Solomon Romain Gary Translated by Barbara Wright (Harvill £7.95) I f he is remembered for nothing else, Romain Gary will be remembered as the only writer ever...

Half a bottle a day

Geoffrey Wheatcroft A Personal History A.J.P. Taylor (Hamish Hamilton £9.95) T here is far more to Mr Taylor's life than history books and common-rooms. As it says, this is a...

Michael Holroyd W illiam Gerhardie was 29 when The Polyglots was first published in 1925. Like his first novel, Futility, it draws largely on personal experiences. The son of a...

Set apart A. S. Henry I f, in the last six months, you have been thinking of buying a new recording of the Bach Brandenburg Concertos, your choice would have to be made...

Back to nature David Wakefield A the time of writing, few of the major art galleries in London have opened their summer exhibitions, but there promise to be several shows of...

Disenchanted Giles Gordon Lear (RSC: The Pit) The Communication Cord (Hampstead) Other Worlds (Royal Court) Much Ado About Nothing (RSC: Barbican) E dward Bond, in the...

John McEwen T2- Clark is coming', so the message Ilwould run through the counties of England in the Fifties as Kenneth Clark made his famous progresses as a lecturer on art....

Spaced out Peter Ackroyd Android ('15', selected cinemas) This his is the story of Max — not Mad Max Australian cult hero but Max the dissatisfied android. He performs his...

Ad infinitum Richard Ingrams I f the Conservative Party have got the right idea in limiting their party politicals to five minutes the BBC has done exactly the opposite. The...

`Caring' P.J. Kavanagh T here was much talk recently at our parish council of becoming 'a caring community', because old people (sorry senior citizens) were 'at risk'. It was...

Out and about Taki T he last time I saw Roy Jenkins it was at a New York dinner which I wasn't in- vited to and didn't attend it. It was at this particular dinner that Jenkins...

No. 1271: Jinglish Set by Jaspistos: An old London Transport notice used to tell bus-users: 'Face the driver, raise your hand. You will find he'll understand.' You are invited...

for extracts from startlingly reverse history and him. Hitler the reluctant puppet, Hitler the queer, Hitler the Russian mole, Hitler the passionate convert to cricket...

di cumumenvon00 Seven of the unclued lights consis sthneeceidaittoorr).of, and six other regula contributors to, the eighth (The Winner:gdBoanrnoesx,onB,lakesley Hatfor d,

A prize of ten pounds will be awarded for the first correct solution opened on 13 June. Entries to: Crossword 609, The Spectator, 56 Doughty Street, London WC1N 2LL. 1 2 3...

Balance of power Raymond Keene A book with an unusual slant which has so far eluded commentary in this col- umn is the late Wolfgang Heidenfeld's Draw! (Allen and Unwin,...

Spectator Wine Club Auberon Waugh A fter last month's slightly uninspiring offer of Italian cheapies we are back to the Burgundy region where my own heart belongs and where, I...

Ti e South African airforce responded to the bombing of its headquarters in Pretoria, in which 17 (including eight blacks) were killed and over 200 injured, by attacking...