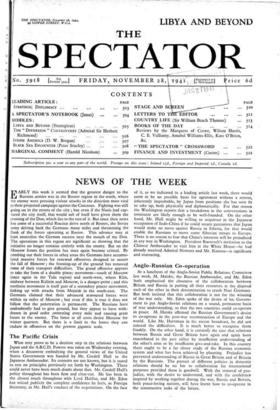 E ARLY this week it seemed that the greatest danger to the Russian armies was in the Rostov region in the south, where the enemy were pressing violent attacks in the direction...

What may prove to be a decisive step in the relations between Japan and the A.B.C.D. Powers was taken on Wednesday evening, when a document embodying the general views of the...

At a luncheon of the Anglo-Soviet Public Relations Committee last week, M. Maisky; the Russian Ambassador, and Mr. Eden both emphasised the closeness of the collaboration...

Some little stir has been caused by an apparent conflict of views as expressed by Mr. R. S. Hudson, Minister of Agriculture, and Mr. Harcourt Johnstone, Secretary of the...

The Commandos and Sir Roger Keyes The easiest and the

least profitable kind of reply to the charges which were brought against the War Office by Sir Roger Keyes last Tuesday is to object that a man who has been dismissed from an...

The Condition of Spain

Germany's concern about the British offensive in Libya is not without its effects on Spain as well as on Vichy France. The pressure she is applying to Vichy in order to secure...

The Home Secretary's statement in the House of Commons, on Wednesday, regarding the Emergency Powers Defence Regulation 18B secured the rejection without a division of the...

The last " pocket " of resistance in Abyssinia is likely soon to be wiped out by the mixed force, including " Patriots," now successfully handling- the Italian remnant which has...

R ATHER over sixty years ago a conference was held at Berlin which, in the judgement of the principal British delegate, was productive of peace with honour. The rather...

the closing of schools and clubs and many other conditions have combined to produce we of the most distressing social results of the war—an increase in juvenile crime. But there...

We are only gradually discovering the effects of evacuation on

town children. Light on one aspect of that is thrown by some very interesting figures quoted by Sir Edward Cadogan in the recent debate in the House of Commons on religious...

In view of the prospect that General Auchinleck's troops will

soon be sweeping westwards along the Libyan coast, it may be useful to recall, for purposes of comparison, the chief stages of General Wavell's advance last winter. The...

The Royal Surgical Aid Society, I observe, is holding its

annual meeting at the Mansion House on Monday, with a galaxy of the eminent to grace its platform. The charitable purpose of the society is admirable, and it would deserve...

A SPECTATOR'S NOTEBOOK T HE Libya battle may have produced more

visible results by the time these lines are read than it has at the moment they are being written. After the general satisfaction at the effects of the first clash, a public...

By-elections in Ulster are of some interest in view of

signs that the strong official hold of the Government on the electorate is being shaken. Seven months ago, it will be recalled, the seat vacated by the death of Lord Craigavon...

Rather late in the day—for it was reviewed in the

literary columns of The Spectator some weeks ago—I have been reading Jennie Lee's sixpenny pamphlet on Russia, and have found it quite remarkably good. Miss Lee (who is also...

a The War Surveyed

LIBYA AND BEYOND By STRATEGICUS HE Libyan offensive has opened, and already everyone is T taking its possible development as the starting-point of his outlook on the war. As...

By ADMIRAL SIR HERBERT RICHMOND A S long ago as the beginning of October appeals were made in the Russian Press for immediate action by Great Britain in the west. "The moment...

By D. W. BROGAN n NE of the most interesting and profitable of the cultural U enterprises of the New Deal was the employment of out - of- work intellectuals m the compilation...

By PETER STUCLEY I VAN TUVALOV, aged thirty-three„ was one of those " scientific workers " with which the Soviet Union seems to abound. For science, in the Soviet Russian...

who follow Darlan or who serve Sieburg. It is with the ordinary, decent Frenchman who (stunned by disaster and confused by suffering) falls back upon the traditions and...

Let me pursue my parable. Supposing thereafter that one and

a-half million of our men were taken as prisoners into Germany and held there as the hostages for our collaboration. Their captivity would not merely drain the very life-blood...

Our first duty is to understand ; and in order

to do that we must place ourselves in the position of the ordinary decent Frenchman resident in France today. Let me transpose the circumstances. Suppose that in the autumn of...

By HAROLD NICOLSON T HE resignation of General Weygand is a portent, the full consequences of which it is still impossible to forecast. " After fifty-six years of public...

I am not suggesting that Marshal Petain is in himself

com- parable to Roberts of Kandahar. The latter had a noble nature : Petain does not possess a noble nature. He was a defeatist in 1917 ; he was jealous of Foch ; he is governed...

" Get a Load of This." At the London Hippodrome.—" Love in a Mist." At the St. Martin's. THE old-fashioned revue was a thing of shreds and patches, always inconsequent and...

Tins would have been the hour for the coach to arrive. Flame-bright nasturtiums sprawl and spill Over green tubs. The dog is asleep. The loch is long and dark and deep And...

Snt,—In a letter which appeared in a recent issue of The Spectator over my name a reference was made to the appointment as Zone Instructor of an old regular soldier. I have...

LETTERS TO THE EDITOR " ROOTS OF THE TROUBLE" Stn,—The

observations in " A Spectator's Notebook " are always of interest and value even though one naturally does not always agree. Janus"' comments, however, in your issue of November...

SIR, —Mr. Robert Henrey's review must not go without an answer. Of course, much of the programme of the Popular Front was untimely in view of an international situation created...

SIR, —An interesting and crisply written, but not so enlightening, review appeared in your issue of November 14th on Pakistan. The reviewer, Mr. Z. A. Bokhari, who is himself an...

Sia,—There is a widespread and growing feeling that the new rich are not paying income-tax at a rate proportionate to their earnings. In munition-factories today it is no...

SIR, —The much-criticised "Group System" in the School Certificate examination was devised to ensure a good " all-round " secondary education and to prevent premature...

venture to think that Mr. Sinsheimer's attempt to throw the whole responsibility for German aggression on Prussia is entirely unhistorical. It is doubtless true that the Thirty...

Snt,—I should like to draw the attention of the Master

of Balliol to the present position of marks in the educational system: marks, apparently a mere fiction, exert a very real power : they compel both teacher and pupil to a high...

followed the advice of the Doctor-Gardener in the hope that I should be able to extend the tomato season. I picked my green tomatoes and divided them into three parts. One part...

GREEK FOR GIRLS—AND OTHERS

SIR,—A boy or girl becomes a finer creature and a better citizen by studying Greek and absorbing by means of this study Greek culture as expressed in its art and literature ; a...

Depredations from gardens, generally regarded as sacrosanct, have become sadly common of late. Who the thieves are—soldiers, civi- lians and what sort of civilian—is a question...

When those few splendid weeks are over in which the

woods and hedges gleam, like the Assyrian cohorts, in purple and gold, a few oaks and beeches remain fast of their leaves. Though the green sap has wholly migrated, the brown...

In the Garden Among the numerous elaborate garden-catalogues that have

appeared as usual about this date the best lays stress on the need for garden planning for the vegetables. There is perhaps much more to be done than is done in designing the...

Many - Coloured Game At a rough shoot the other day a

pheasant of a very strange plumage was shot. It was black and dark brown except for a generous sprinkling of white spots about the neck and head. A specialist who was consulted,...

followed with interest the controversy between Mr. Osborn and Miss Denby, which has now moved- on to gardens. As the corre- spondence is supposed to be about " facts as...

Looking Backward Lorin NEWTON, recalling the experiences of a well-filled life, is no novice at his task. He has published a full biography of his old chief, Lord Lyons; the...

Mr. Churchill. By Philip Guedalla. (Hodder and Stoughton. 8s. 6d.) MR. GUEDALLA as a writer has many moods, ranging from the coruscations of his Palmerston to the relative...

The Correspondence of Richard Steele. Edited by Rae Blanchard. (Oxford University Press. 355.1 ONE of the most elegant and insidious literary devices of the eighteenth century...

An American in Berlin

Into the Darkness. By Lothrop Stoddard. (Chapman and Hall, izs. 6d.) THIS careful study made by Dr. Stoddard of Germany during the first five months of the war—only—is intended...

CHILDREN, like adults, are reading more this winter and for the same reasons. Tor intelligent twelve- or fourteen-year-olds (evacuees especially) nothing could be more suitable...

It Passed Too Quickly. An Autobiography. By Air Vice- Marshal Sir David Munro, K.C.B. (Routledge. 15s.) HAPPY is the man who can label his life story, written in the sixties,...

The Penguin New Writing. No. 9. Edited by John Lehmann.

(Penguin Books. 6d.) THE success with the public of Penguin New Writing when launched last autumn has led to its making further and, let us hope, regular appearances. Its...

By Order of the Gestapo. By Peter Wallner. (John Murray.

7s. 6d.) LORD DAVIES, who writes the foreword, may be right in saying that " we cannot read too many books of this kind, horrible though they are." In any case, it seems...

THESE are all new additions to the delightful series of

Puffin Picture Books, which are admirably designed for children from the age of three upwards. The texts are very simply and clearly written and the illustrations both in black...

By CUSTOS WHAT is most impressive in the stock markets is .not their activity but their latent strength. Superficially, it may appear , that speculative dealings are at present...

(A prize of a Book Token for one gutnea uall be given to the sender of the first correct solution of this week's crossword puzzle to be opened. Envelopes should be marked with...

SOLUTION TO CROSSWORD No. 140

OTTOMAN BANK MAINTENANCE OF LIQUIDITY THE annual general meeting of the shareholders of the Ottoman Bank was held on November 26th in London. General The Hon. Sir Herbert A....