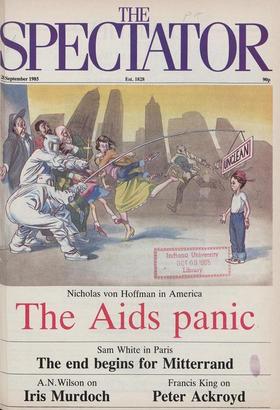 A n earthquake devastated Mexico City and the country's Pacific coast. The Red Cross estimates that 12,000 people may have been killed. Frantic efforts were made to rescue...

WHEN he originally wrote his criticisms of his city's multi-racial education policy, Mr Ray Honeyford, the headmaster of Drum- mond Middle School, Bradford, may not have been...

QUESTION: when is a terrorist not a terrorist? Answer: when he is a member of the PLO. Having made one of her charac- teristically sweeping statements to the effect that her...

L'AFFAIRE GREENPEACE I s there any single part of l'affaire Green- peace which would have happened the same way in Britain? Clearly the secret services of most states use some...

If Lloyd George could do it, why can't they? FERDINAND MOUNT M ildness is all. The British public is now believed, by almost everyone in poli- tics, to have an insatiable...

T he Mexican earthquake disaster and the recent spate of child murders have one thing in common. Confronted by such images of extreme human horror we feel so helpless in our...

The helicopter that was wasted on Tina Beechook AUBERON WAUGH as I alone, I wonder, among tax- payers and GLC ratepayers to feel a twinge of alarm when I read in the Standard...

INFECTED BY THE AIDS PANIC

Americans have become obsessed by the spread of Aids. While death has not lost its sting, sex has undoubtedly lost its zing. By Nicholas von Hoffman AMERICANS don't love their...

Students are twice as likely to enjoy The Spectator at

less than half-price. More stimulating than any lecture, funnier than the set books, The Spectator should be required reading for every student. With Student Subscriptions...

Sam White on the disaster which France courted by sinking the Rainbow Warrior Paris NEITHER the resignation last week of the Minister of Defence M. Charles Hernu, nor the...

HERESY IN THE PUNJAB

In the last days of the ,election campaign, Dhiren Bhagat finds Sikh attacking Sikh Barnala BARNALA (pop. 28,000) is a small, dirty town in southern Punjab, the sort of place...

The hollowness of the European `peace' has been roughly exposed this week. Lord Beaconsfield, it will be remembered, during the Conference at Berlin insisted that Bulgaria...

Andrew Brown on the distractions provided by old newspapers The fishing hut, Bredfjallet IT'S easy enough to enjoy Sweden: just find a house that has no electricity, no...

THE FUTURE OF MAN

Gavin Stamp on the gloomy prospects for an island ruled by philistines Port Erin CASTLETOWN, on the narrow gauge steam railway which, in the summer months, takes over an hour...

Travellers: A profile of John Hatt, innocent abroad HOW and why did it come about that a Chinaman of old, having gazed up into a tree and spotted a bird's nest, asked himself:...

The press: Will they find out why Hernu went? By Paul Johnson WHAT fun the French press have! The defection of the KGB mastermind in Lon- don, by any standards the biggest...

The fearless five talk down the dollar JOCK BRUCE-GARDYNE M r Martin Feldstein, we are told, was unimpressed. 'For the avoidance of doubt,' as the lawyers say, I should...

New eyes behind the Bank's windowless wall CHRISTOPHER FILDES I t is more than 20 years since I first began to call at the Bank of England and impede the work of the Discount...

THE bad news is that next week's Interna- tional Monetary Fund meeting is in Seoul. (Given the choice, the Chancellor prefer- red Blackpool.) The good news is that the...

THE arrival of Kit McMahon will reward the directors of the Midland Bank for an unusual decision. Earlier this year they made up their minds to look for a chairman who was a...

NEVER a dull moment for investors in L. Texas Petroleum, whose shares, when offered on the London Stock Exchange, proved to be such a dry well. Tense City meetings followed...

THE Governor and Deputy Governor are appointed for terms of five years, by the Queen, on the advice of the Prime Minis- ter. Governor Robin Leigh-Pemberton was chosen in the...

Sir: I am sorry that my foul handwriting led you to suppose I was describing the Amer- ican psychologist I met on BBC's Start the Week as 'most aggressive' (Another voice, 21...

Sir: P. J. Kavanagh is always a welcome visitor to the London Library, but his mind must have been on blackberries and bird- song when he failed to find anything here on Francis...

Sir: Could Mrs Jean Hayes (`Alien corn', 14 September) please be given some simple facts? All wheat, when ripe, bends over at the head: furthermore, after rain (and there was...

Sir: At a gathering of American Episcopa- lian bishops, there was a unanimous vote to add Dr Martin Luther King to the calendar of saints. But, despite support from several...

Sir: Mr Lambton's review of A. N. Wil- son's Gentlemen in England (Books, 14 September) was not only unpleasant; it was incompetent. The unpleasantness is a mat- ter between Mr...

Sir: A small point relating to Patrick Marnham's very generous review of my book (21 September): he has promoted me. The only Lieutenant Cobb in my family was my father — in the...

Sir: We were pleased to see Peter Levi's review of Keith Douglas, A Prose Miscel- lany, in the Spectator (7 September), but should like to put the record straight on one point....

A prodigal novelist A. N. Wilson THE GOOD APPRENTICE by Iris Murdoch Chatto & Windus, f9.95 I ris Murdoch's readers divide between those who think that her characters are...

The greatest traveller since Marco Polo

Auberon Waugh JACKDAW CAKE: AN AUTOBIOGRAPHY by Norman Lewis Hamish Hamilton, £9.95 I am not sure why Norman Lewis called the first volume of his autobiography Jack- daw Cake,...

Hugh Cecil THE KITCHENER ENIGMA by Trevor Royle Michael Joseph, £15 A fter a course of years every soldier acquires more or less insanity; the result of his moral training,'...

Like plump, unfinished swans clouds drift Headless just beneath the gloss Of pond where willow-branches shift Very gently, under glass. Deeper, on pond-bed, you see The little...

A voice from the past

Francis King HAWKSMOOR by Peter Ackroyd Hamish Hamilton, £8.95 T he epithet 'clever' has tended to become a pejorative among reviewers themselves obtuse. But however great my...

‘Yarroo' in the corridors of history

Miranda Seymour BUNTER SAHIB by Daniel Green Hodder, f8.95 BUT FOR BUNTER by David Hughes Heinemann, f8.95 I never myself had much time for the fat owl of Greyfriars,...

A kind of faith

Wandering into dreams My loved and lost ones shake My cool agnostic ways. He: 'Look how I see again.' `Let's take that ferny walk We promised ourselves,' she says. Then from...

Harriet Waugh THE GOOD TERRORIST by Doris Lessing Jonathan Cape, f9.50 A lthough Doris Lessing made a rather coy re-entry into general fiction a couple of years ago under the...

Peter Levi WILLIAM STUKELY by Stuart Piggott Thames & Hudson, £14 A s Chesterton observed, the purpose of school is to watch the amazing be- haviour of schoolmasters. Great...

Opera Enormously engaging Rodney Milnes S tockhausen's Donnerstag could be said to represent everything that your de- tached, upright, cold-bath Englishman most loathes about...

Kiss of the Spider Woman (Bush) Web of inertia Christopher Edwards T his play is based upon a novel of the same name by the Argentinian writer Manuel Puig. A film of the book...

Body Double (`18', selected cinemas) Bright lights, bright people Peter Ackroyd B rian De Palma is both one of the most fascinating and most vulgar of American directors —...

Inside Number Ten Alexander Chancellor E dward Heath is irresistibly attracted to those vowel sounds which he cannot pronounce. When he arrived at Number Ten Downing Street,...

Setting sights Taki I think it's time for me to move on. The great American climber invasion has be- gun, and there is no room on these isles for both Taki and those in search...

Reformed character Jeffrey Bernard I took my 15-year-old daughter Isabel to Newbury races last Saturday and I behaved so well that the memory of it has left me stunned....

Cooking the books Alice Thomas Ellis A s I happen to be connected with publishing and the World of Books I am sometimes approached by people with manuscripts and I have come...

God, death, and our children P. J. Kavanagh 0 n the face of it nothing could be more natural than becoming a parent, yet there is no event that so completely dis- rupts and...

A couple of birds Jaspistos I n Competition No. 1388 you were asked for a poem with the rhyme-scheme: shine, right, sight, mine, appalled, same, name, called, confounded,...

`I MAY not omit here' — wrote Robert Burton — 'those two main plagues, and common dotages of human kind, wine and women, which have infatuated and besot- ted myriads of people....

You are invited to write a true recollection of your own childhood featuring a memorable adult. Maximum 150 words. Entries to `Com- petition No. 1391' by 11 October.

Nigella Lawson is away.

Solution to Crossword 724: Rule of three