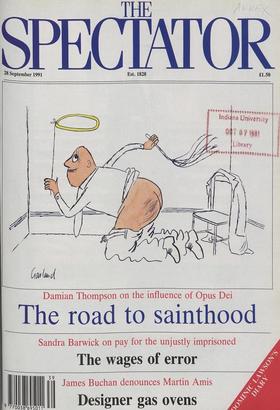 Now that we have safety gear will you fight?' A leaked copy of a confidential letter from the Treasury Chief Secretary Mr David Mellor, revealed that the Govern- ment is facing...

Is politics more than just keeping the other lot out? NOEL MALCOLM s tatistics show that suicides happen most frequently in the spring. At first sight this is a very puzzling...

DOMINIC LAWSON T he obituarist's art has been enjoying a period of high fashion. Now, not just the Times but also the Telegraph and the Independent offer a whole page of notices...

Time to take up a position against all groups everywhere AUBERON WAUGH A demonstration, mounted by Slag (Socialist Lesbians and Gays) outside the offices, attracted...

BEATING A PATH TO SAINTHOOD

One of the Catholic Church's most controversial figures is about to be made a saint, to the dismay of many believers, reports Damian Thompson THE HEAD of the London information...

A MURDER has been committed at Liverpool which is almost, though by no means quite, unique in the annals of crime, and which will greatly perplex the Judges. A coroner's jury...

A GHOST IN WOLF'S CLOTHING

Mark Almond on Germany's characteristic unwillingness to learn the lessons of its past IN East Berlin's central crematorium, the staff used to conduct a standard non-...

Mark Urban on why the organisation's rank and file will not lose their jobs Mosco w THE PULLING down in Moscow of the statue of Felix Dzerzhinsky, founder of the Cheka — the...

DUE AT MI6 fresh ideas in British Intelligence THE Iron Curtain may have been drawn back, the KGB subjected to reform, the CIA forced to justify its existence and the French...

A profile of Lord Carrington, who has much experience of meeting with triumph and disaster LORD CARRINGTON is one of nature's chairmen. Despite his fame as a statesman, and as...

THE FOOD THAT GOT AWAY

Simon Courtauld bemoans the British housewife's antipathy to fish MARKET DAY in Marlborough, Wilt- shire, last Saturday was crowded and busy — except for the stall selling...

Henry Porter on the mania for gadgetry and body equipment THE JEEP, a big square Mercedes, drove down the shingle beach and turned round to reverse its trailer into the...

persist . . . THE WORLD is so full of great tragedies that it might seem almost self-indulgent to draw attention to a small one. Doctors, however, deal with individuals rather...

Ross Clark discovers how one man and a sperm gun can 'father' 3,000 cattle a year SUNDAY in the green, ice-carved hills of south-west Wales was once renowned for its dryness,...

`Sleek and shining creatures of the chase' PAUL JOHNSON R ecently I sat in a canvas chair in the village street of Stogursey doing a water- colour drawing of its magnificent...

WAFTING across the North Sea from Dutch ovens comes the unmistakable smell of monetary fudge. Rich, bland or nutty, it can suit all tastes. John Major liked the flavour at...

IN congratulating The Spectator's editor, Dominic Lawson, on his engagement to be married, I reflect that I was first appointed to the paper by his father. Indeed, if I last as...

THIS IS an anxious week at Brent Walker — can the company survive as far as Friday, when it is supposed to be having a shareholders' meeting? Or Saturday, when it is booked to...

Here comes another round of Guinness, but there's moaning at the Bar CHRISTOPHER FILDES W hat, will the line stretch out to the crack of doom? Roger Seelig and Lord Spens,...

You cannot be serious

I AM sorry to learn that Charles Haughey, the Irish Prime Minister, plans to give his scandalised country a serious fraud squad. There are quite enough of them already, and I am...

I think therefore he's not

Sir: Alfred Sherman's first letter was silly, but his second (21 September) is simply preposterous. He seems to think that before criticising what he wrote, I should have made...

Sir: Anatole Kaletsky sets out to 'debunk' the notion that property debt and specula- tion has been bad for the economy (Wore than bricks and mortar', 21 September) but the only...

Sir: In his article, Anatole Kaletsky asserted that if labour

mobility in Britain is limited by housing it is because homes generally are in short supply'. Later on he warned against blaming the booms and slumps of the housing market on...

Sir: Andrew Lycett's article (The Sad Decline of a Stately Pile', 21 September) is a depressing amalgam of ignorance, innu- endo and something uncomfortably close to racial...

Sir: Anne McElvoy's perceptive and sympa- thetic article on Europe's abandonment of the peoples of collapsing Yugoslavia falters rather when touching on second world war...

Sir: In case any of your readers have not had

what Sir Alfred Sherman (Letters, 31 August) would describe as the 'intellectual curiosity' to find out about the point of view of the Serbian Chetniks he apparently admires,...

Sir: 'Few things have disgusted me more than Auberon Waugh's year-in year-out attacks on the wholly just and overdue demands of the disabled to be given the same facilities in...

Sir: Robin Lee seems engaged in a vendetta against the BBC Clarissa. Having already harangued readers of the Mail on Sunday (1 September) she offers her reheated com- ments to...

Sir: Charles Moore's article is so full of confusions that

it is difficult to know where to start to disentangle it. He follows the trend, set by the Archbishop of York, to deal with the issue in terms of personal size rather than...

Sir: I respect the strength of Mr Moore's feelings (Another Voice' 21 September) but his article contains too many unwar- ranted inferences and assumptions. Here are some of...

Known ever clearly, loved ever dearly

Kenneth Rose GRIZEL H ubert Hartley, who taught French at Eton from 1922 until his retirement in 1956, was an Olympian among school- masters. He stroked the Cambridge eight to...

What demi-god bath come so near creation?

Philip Glazebrook MURDER IN THE RAIN FOREST: THE CHICO MENDES STORY by Alex Shoumatoff 4th Estate, £15.99, pp. 381 h ere are two positions you can take on the Amazon Rain...

After the sun had set

David Montrose THE KINDNESS OF WOMEN by J.G. Ballard Harper Collins, £14.99, pp. 286 One is enough, Olga. I might write a sequel about my life in England. I n the final...

Reflections on the glass cage

Peter Vansittart THE SINS OF THE FATHER by Allan Massie Hutchinson, £13.99, pp.299 A llan Massie leaves the parish pump to others. His novels are concerned with the secrets...

Charm he never so wisely

Philip Mansel FOX by Stanley Ayling John Murray, £19.95, pp. 271 C harm was the secret of the great 18th-century Whig, Charles James Fox. He was attractive, genial and never at...

Wiping the smile off his own face

Tom Pocock TO REASON WHY by Denis Forman Deutsch, £13.99, pp. 220 T he Italian campaign must always have seemed the dead-end that it was. Not only would the Allied armies,...

Our revels not quite ended

Frances Partridge SHAKESPEARE — HIT OR MISS by John Gielgud, with John Miller Sidgwick, £17.50, pp. 192 T he life behind the footlights has always fascinated the layman, and...

Rupert Christiansen THOSE TWENTIETH CENTURY BLUES by Michael Tippett Hutchinson, £16.99, pp.290 T a king a bow at the Proms a couple of weeks ago, Sir Michael Tippett, a...

July 5, 1917 I was distressed to hear from our Colonel that the man who came to us under arrest as a deserter six months ago and who had deserted again four times since, had...

Her mother said 'Do as I say not as he does Because I'm your mother I know what I'm saying If only you knew how I wish that I hadn't But he did and I did and nothing was doing...

Architecture The Prince's quest Alan Powers sees hope for the common man at a summer school in Italy T he vested interests of the architectural profession represent a tiny...

Hamlet (Globe) The Prince of Japan Christopher Edwards T he Tokyo Globe Company has brought its kabuki version of Hamlet to London as part of the Japan Festival 1991. The...

Idomeneo L'Etoile (Opera North) Plain • singing ho goes to 'hear' opera nowadays? Instead everyone blithely talks about 'see- ing' them — the primary force of the expe-...

Under Suspicion (`18', Odeon Marble Arch) Meeting Venus (`18', Plaza) Comfortable crime Harriet Waugh A though not the most noteworthy film of the week I could not resist...

Here comes the Bogey-man Taki ike most people who have seen the film Casablanca, I've dreamed of owning a Rick's of my own. For one, beautiful women would come at me like...

More costume less drama Martyn Harris I t is not much of an exaggeration to say the BBC exists to make programmes like Upstairs Downstairs, and its successor The House of...

A very present help Jeffrey Bernard I t doesn't get any better. This morning the lovely Irish home help came in to dress me and wash me, and when she shoved the flannel and...

Join the club Zenga Longmore B efore I became a mother, the name `One O'Clock Club' meant absolutely noth- ing to me. To be quite honest, if somebody had invited me to a one...

vicinity, believe me that the last thing the restaurant critic wishes to do is advertise the fact. When Gina Taddei Opened Cibo, it must be a couple of years ago now, his site...

Inquisition Raymond Keene R uy Lopez was a Spanish priest of the 16th century, a favourite of the court of King Philip the Second and one of the leading players and writers of...

Bouts limes Jaspistos I n Competition No. 1695 you were given 16 rhyme-words and invited to write a poem using them in the order given. They came, as one or two of you, I...

Sloane Ranger, Young Fogey, Essex Man . . What new social type, representative of the 90s, will emerge? Imagine you are a social historian of the next century and describe it,...

Fighting talk Frank Keating JOE BUGNER was derided by the panatella fancy at ringside as a big stiff who couldn't punch his way out of a paper bag, the original Joe Palooka....

Dear Mary.. Q. My husband's business has lost a small fortune this year and we have had to tight- en our belts as never before. Bulgarian Cabernet is now the only wine we can...