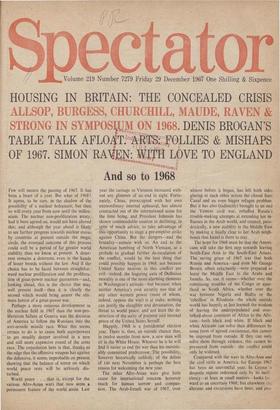 Few will mourn the passing of 1967. It has been a beast of a year. But what of 1968? It opens, to be sure, in the shadow of the possibility of a nuclear holocaust; but then so...

Although it is less than six weeks since the Prime Minister, in his now notorious devalua- tion broadcast, declared that 'We are cutting back public expenditure. . . . But the...

Portrait of the year

Naked out of the chamber

POLITICAL COMMENTARY AUBERON WAUGH Few people are going to forget the South African affair in a hurry. Last week, I wrote about its repercussions inside the Cabinet. On the...

CHRISTOPHER HOLLIS Dr William Shockley of Stanford University called for a mandatory birth control involving government permission for each conception. . . . All girls would be...

Six of our Personal Columnists venture their hopes and fears for the new year. KENNETH ALLSOP Perhaps it is the winter solstice. Perhaps it is brain damage from the terrible...

1. Breakthrough or collapse ? Housing in Britain The concealed

crisis DAVID DONNISON David Donnison is Professor of Social Sciences and Administration at the London School of Economics, and a Vice-President of the Lon- don Rent Assessment...

DENNIS PILCHER Dennis Pilcher is a Vice-President of the Lon- don Rent Assessment Panel, set up under the Rent Act, 1965, and was a member of the Milner Holland committee of...

LEWIS WADDILOVE Lewis Waddilove is Chairman of the National Federation of Housing Societies and .Director of the Joseph Rowntree Memorial Trust. He was a member of the Milner...

J. W. M. THOMPSON 'I am afraid I am doomed to disappointment all round," wrote Jo Grimond when offering his 'Hopes for 1967' in the SPECTATOR symposium on the new year just...

With love to England

PERSONAL COLUMN SIMON RAVEN Once upon a time, not very long before the Byzantine Empire finally tottered into the dust, the Emperor John Palaeologus attended a ceremony of...

From the 'Spectator', 28 December 1867âThe kangaroos are so multiplying in the neighbourhood of Geelong, that great battues have been recently organized, in three of which...

MEDICINE JOHN ROWAN WILSON For some years now there has been concern in the medical profession about the supply and the nature of what is known as 'teaching material.' This...

SCIENCE PETER J. SMITH Regrettably, the Ministry of Technology has recently introduced a revolutionary new con- cept (for science, at least) in the regulation of research under...

The troll in the parlour BOOKS

PATRICK ANDERSON In April 1864 Ibsen began his twenty-seven years' exile from his native country. Like Torvald and Nora Helmer of A Doll's House, or the Chekhovian would-be...

RAYNER HEPPENSTALL Robert de Montesquiou : a Prince of the Nineties Philippe Jullian translated by John Haylock and Francis King (Seeker and War- burg 63s) There was more to...

JOHN HOLLOWAY . . tell me then, whether the above, and the below, and the middle, all exist in nature?' 'They exist.' `And is your book about the first of these, or the...

On the hoof lk

Of his bones are laurel made

MARTIN SEYMOUR-SMITH Tennyson enjoyed more adulation than perhaps any other English poet. Then an inevitable reaction set inâagainst the age at least as much as against the...

ROBERT BLAKE 1 314h Ronald Butt is --a well-known political commentator. First for the Financial Times, now for the Sunday Times, his articles are always shrewd, perceptive and...

Follies and mishaps of 1967 ARTS

ANTHONY LIVESEY We all know 1967 has been a bad year for the arts, for though a great deal of money has been spent little has actually been accomp- lished. But in all the...

CINEMA PENELOPE HOUSTON The seasonal party game of Hunt the Trend, a well-known trap laid by editors for critics, looks this year almost too easy. Any further mention of Bonnie...

THEATRE HILARY SPURLING Those who, a few years ago, wrote bitterly to the papers complaining of filth, bold doings and danger afoot in the serious theatre, may care to look...

PORTFOLIO JOHN BULL In this business you write your own end-of- term report. My portfolio began two and a half months ago on 6 October : at 390,6 the Financial Times ordinary...

The most fantastic year in bonds MONEY

NICHOLAS DAVENPORT :This was the year which saw British govern- ment credit sink to its lowest ebb. Poor shades of Hugh Dalton! In his day 31 per cent War Loan had touched...

CHRISTOPHER FILDES How to cut public spending and help the Chancellor save Â£71 million: the British Trans- port Dock board comes up with a Â£3 million economy by 'deferment of...

his twenty-eighth book because he is no longer allowed to indulge his craving to stamp on 250 horse power after three double whiskies and a good lunch with a bottle, of wine...

CUSTOS The post-devaluation gloom has been lightened by a strong statement from Leyland Motor. `We have always been optimistic about de- valuation' said Sir Donald Stokes: 'up...

Sir: As I feared, my letter (8 December) about the end of the 'romantic period' of motoring has drawn fire from the expected quarter, that of the self- righteous, of which Mr...

sir: Mr Christopher Sykes (Letters, 22 December) Says that what made him keen to join the army in the war was what he read in the press about Nazi atrocities, 'not some theory...

Sir: Mr Patrick Cosgrave gives us what purports to be a much needed correction of the popular British opinion of General de Gaulle (SPECTATOR, 22 December). This opinion is...

Sir: Good news! An unabridged (and evidently revised) version of Mary McCarthy's Observer articles together with a new section entitled 'Solutions,' was published as Vietnam by...

Sir: I hope the ideas put forward in Mr Jain Stewart's excellent article (in your 15 December issue) will be widely discussed and adopted. Surely the time has come to provide...

Sir : In your issue of 22 December Patrick Cosgrave calls for a better understanding of French politics âmay we hope that your New Year resolution will : be to bring about a...

Sir: A biography of the violinists Adila Fachiri and Jelly d'Aranyi is to be published next year, and I would be deeply grateful if any of your readers could tell me to whom I...

Sir: Mr J. W. M. Thompson wondered last week (Spectator's Notebook,' 22 December) how Mr Wilson had found a plausible substitute for himself to play the role of 'Lord of...

Wish you were here

Sir: While sympathising with Donald McLachlan's desire to keep the nicest 'unspoilt' holiday places to himself. I feel I must take him up on a point of detail in his otherwise...

PHILIDOR Black White men 2 menâ to be inserted Put a White king and pawn on the board so that, with White to play, he can win; solu- tion next week. This amusing puzzle is...

No. 481: The word game Competitors are invited to use the following ten words, taken from the opening passages of a well-known work of literature, in the order given, to...

Toad in a hole

AFTERTHOUGHT JOHN WELLS The Mole had been working very hard all the morning, cleaning up his little home at Number Eleven Downing Street after the jolly house- warming party...