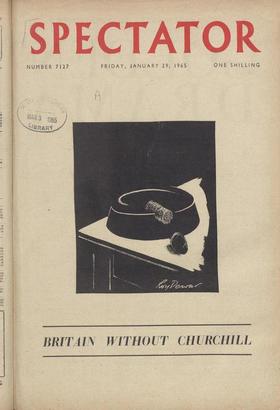 THE WORLD LEARNED THE NEWS from a simple bulletin : 'Shortly after eight a.m. this morning, Sunday, January 24, Sir Winston Churchill died at his London home.' The Queen wrote...

IT has been most moving this week to see how those who are too young to have known Winston Churchill at the height of his powers have suddenly come to under- stand and revere...

The Results of Rambouillet

1—If Truth be Told DREW MIDDLETON writes from Paris: One of the most important topics that General de Gaulle will have to discuss in his news con- ference next week is the...

How Leyton Was Re-oriented JOIN HARVEY, M P, writes: The simple truth underlying the result at Leyton is that a sufficiently large number of local people showed their...

2—The Turn of the Tide

SARAH GAINHAM writes from Bonn: Rambouillet was a coup de thOdtre: the an- nouncement that accomplished facts had been graciously agreed to by a Canute who was wise enough to...

OUR MOSCOW CORRESPONDENT writes: Like most communiqués, the one after the Warsaw Pact meeting said little. But the meeting itself was of some importance. It was the first...

IN NEXT WEEK'S 'SPECTATOR' •

The New Model Educator By ALAN WATKINS M R. HAROLD WILSON'S famous first reshuffle has taken place in circumstances less auspicious than were originally hoped for. Yet the...

Magic Re-created By CHRISTOPHER BOOKER E MIT o'clock on a cold Sunday morning. For the press, teed up for a week to do justice to a great event, the news could not have come...

Mr. Green and the Plumbers

From MURRAY KEMPTON NEW YORK r Titie public life of Ernest Green, twenty-three, 1 stands for a whole history, simple and easy when it began, brief in its course, and now come...

scan Lemass Would look a bit of an ass, If they abolished partition Belpre the Republicans had run out of ammunition. But Captain O'Neill Said, 'One does fool Things might...

l r was cold in Westminster Hall. Cold and high and lonely and, for all the files of mourners, empty. As one stood at the top of the crypt steps it was not the catafalque and...

I was glad to see that Lord Attlee went out of his way in his House of Lords eulogy to refer to Churchill's great biography of Marlborough. As we all know, the volumes of The...

The mystique of Balliol has always eluded me. Balliol men are rarely effortless, not always superior. But there is a distinct Balliol manner. The college has a way of taking the...

Tailpiece It may seem a little early to announce literary

awards for 1965, but I unhesitatingly declare Mr. Anthony Wedgwood Benn's new book to possess the most pretentious title of the year—The Re- generation of Britain. The book...

Flush In this issue (and I believe also in the

None of the formal tributes matched the theme. None of them could. Here and there, as when Paul Reynaud and when Harold Macmillan spoke, one heard snatches of a requiem. For the...

John Harvey's short •piece on Leyton in this issue gives full praise, and rightly so, to Ronald Buxton, the new MP, and to a very efficient, and reinforced, constituency...

By EDWARD GARDNER, MP IE increase in parliamentary salaries has revived the argument that membership of the House of Commons should be a full-time professional occupation....

What Sort of Parliament?

A week in which political controversy is muted in mourning for the greatest parliamentarian of the age is an appropriate moment to reflect upon the essential character of the...

By LAIN MACLEOD I F Sir Alec had fed all the data relating to the very model of a modern party chairman into a computer, the machine would surely have chattered out the name of...

Justice by Accident By BEN WHITAKER TN July 1963, Detective-Sergeant Challenor 'arrested a man called Donald Rooum on a charge of carrying in his pocket a half-brick with the...

Afternoon in the DDR

By DAVID REES T ILE tour of East Berlin starts from just off the Kurftirstendamm. The bus is two-thirds empty, a clutch of West Germans, a Burmese student, some Scandinavian...

year (including postage). For this rate, the paper will be delivered by surface mail to any address in the world. Air mail rates for overseas subscribers are : i4 12s. to...

Sit, — In your issue of January 22, in 'Political Commentary,' Mr. Alan Watkins writes: 'The phrase "public relations" was first used in this country by Mr. C. R. Attlee. The...

Sins Remembered, by Viscount Churchill, and his reference to Blenheim Palace, I found it curious to reflect how, in heredity, it is so common to look at the sire of a marriage...

SIR,—Mr. Nigel Nicolson has made an effective and lucid reply to the article appearing in your edition of January 16 on 'Le Machin.' However, 1 wonder whether it would be...

SIR,—May I thank you for your leading article, 'A Man

Called Churchill.' Both in thought and beauty of expression it was superb. ARTHUR J. AMOR Beaumont, Furze Hill, Purley, Surrey

SIR,-1 would not normally allow myself to be drawn into the thoroughly distasteful type of correspondence in which allegations of misstate- ment and distortion are made. I do so...

SIR,—With regard to the London County Council and the Risinghill Comprehensive School: I have heard Mr. Duane lecture and have never forgotten his enthusiasm and obvious love...

Sta,—If the balance-of-payments deficits of January- November 1964 had continued at the same rate for another three months, our entire reserves of gold and foreign exchange...

SIR,—It seems fashionable at the moment to deni- grate the 'lobby system' of collecting political news, but Mr. Booker's remarks last week can hardly pass without some comment...

SIR,—Public attention is now focused upon the critical controversy concerning the future of our aerospace industries. Employment of our gifted technologists and skilled...

SIR,—Surely that champion political rigger the Prime Minister should not allow 'a little local dif- ficulty' like the Leyton by-election result to prevent him getting 'the best...

SIR,—Very few of your readers, if any, are likely to

be interested in the comings and goings of the Observer Magazine staff, but your new writer on 'The Press,' Mr. Christopher Booker, has things a little tangled up. Mr. Paul...

SIR,--I always enjoy reading the Spectator each week, but I did not enjoy the statement, 'If the Housewives' League were still with us, God forbid.' If Mr. Watkins lived in this...

Price of a Drug

SIR.—ln your January 1 issue, Murray Kempton displays much of the tendency towards demagoguery that characterised the late Senator Kefauver, and little of the objectivity that...

The Strain on the SaxophOne By HUMPHREY LYTTELTON A N agnostic friend of mine once put paid to a nat . ' argument about religion with this devastating comment: 'All I can say...

Mr. Whicker's Monte Carlo O NE of the securest virtues of television is its ability to take the viewer to remote places and odd situations for just the right amount of time to...

Miller's Tale T HIS is a tremendous performance. It belongs primarily to Miss Sarah Miles, who plays the accuser-in-chief, Abigail Williams. Abigail does not have much to say....

Behind the Scenes I .. HERE have always been devoted adherents of our few English painters better known for their art administration or historical research. No matter if the...

By MORDECAI RICHLER y SHOULD come clean. Show my hand right jaway. I think Saul Bellow is the most gifted novelist writing in America today and if we have Waited long and...

IN my young days, Scottish primary schools ladled out Scottish history in enormous dollops. It was not the kind of history that would have gratified Karl Marx, but we knew about...

LIVERPOOL is so very much itself; so very much a reflection of its people: haphazard, tough , humorous-natured, elegant, ugly and lovely. Quentin Hughes's volume, which is...

Thought and Change. By Ernest Gellner. (Weidenfeld and Nicolson, 30s.) EACH of these books is presented as the latest by the author of an earlier notoriety. Ernest Gellner, now...

ALTHOUGH nearly half a millennium has passed since Columbus, looking for India, found America, there are still few Europeans who have any clear knowledge of the civilisations of...

Edward Lear in Southern Italy. Introduction to and Windus, 21s.) MR. FINER's introduction to Greece has several v virtues, but they are of the sort that demands ao Ba r...

Miss KLEIN'S modest plurals and the sheer size of her book are both encouraging. An enormous volume of work has been done on various aspects of English social life in the last...

The Terminal. By Anthony Glyn. (Hutchinson, 18s.) ' Honey on the Moon. By Maude Hutchins. (Blond, 18s.) IT is a real pleasure to read a truly educated and cultured novel such...

Michael Tippett: A Symposium. Edited by Ian Kemp. (Faber, 50s.) AT the sight of Tippett's name many things come thronging back to me apart from the man's s hining candour and...

Leafing through old diaries as ill-attired as autumn in winter's clothes: the same recurrent anguish in drowning scribbles with the ascenders reaching beyond my gravity's...

The Coming IMF Reform By NICHOLAS DAVENPORT M y mind goes back to 1925 when the £ was restored to gold at its old parity—$4.86- overvaluing it by about 10 per cent and causing...

By LOTHBURY C OMPARING the annual accounts of tt k_,English banks, it is now apparent th: Barclays -has been able to attract more dcposi and use them more efficiently than the...

By CUSTOS T M weekend change in the market atmosphere has been electrifying. The 9.2 jump in the index last Friday suggested that the market was assuming already that the...

SOLUTION TO CROSSWORD No. 1154

Mixed-Manned Medicine By LESLIE ADRIAN Admittedly, dental emergencies are not likely to be as vital as medical ones; nevertheless there is a consumer angle to this rather...

By ALAN BRIEN WHILE the taxi waited at the gate, knocking and c - ticking, the other Thurs- )day noon-time. I rushed into our Kentish Town house to collect an essen- tial...