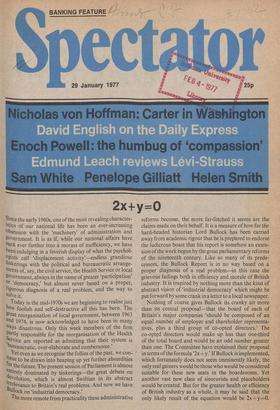 Since the early 1960s, one of the most revealing characteristics of our national life has been an ever-increasing Obsession with the 'machinery' of administration and...

8 Y what some found an interesting coincidence, the Bullock Report was published in the week that saw the highest unemployment figures since the War: an overall total o f 1,448...

Madam President? John Grigg In the last days of his presidency Gerald Ford, assuming the improbable role of a seer, predicted that by 1992 a woman would be nominated for...

The breakdown of the Rhodesian negotiations is a tragedy which appears to have taken the Government by surprise. One wonders why. The white Rhodesians— Understandably after what...

Stand up and be counted Auberon Waugh A rhinoceros will mark out the borders of its territory with a trail of urine and little piles of dung. Anybody who crosses this line will...

Nicholas von Hoffman Washington The last group in Jimmy Carter's Inaugural Parade from the grounds of the Capitol down the mile to the White House were fellow-Georgians...

Sam White Paris What is wrong with French justice? Nothing in law, a great deal in its administration. The recent crop of politico-judicial scandals in France has highlighted...

Patrick Cockburn President Sadat usually likes to be photographed rubbing his pipe thoughtfully as he discusses the future of the Middle East with some suitably distinguished...

The humbug of 'compassion'

Enoch Powell If any one word in the dictionary of political jargon could make me sick, it would be the word 'compassion.' Parties and politicians vie with one another to claim...

David English The reactions to the born-again Daily Express when the new tabloid eventually came off the presses were predictably ritualistic: shouts of hysterical,...

Cabbages and things Marika Hansbury Tenison Some of my best friends have been known to turn up their noses at the common or garden cabbage. Not for them to talk of 'cabbages...

When I grow up

Jeffrey Bernard Entries to our Schools Essay Prize are still coming in. We have weeded out two which have no chance of winning. J. Bernard, Form III B, 7 June, 1944 Where I...

The Keynesian era in perspective

Geoffrey Barraclough There are still people today—there always will be—who cherish the illusion, as plenty of others did in the 1920s, of a speedy return to 'normalcy,' by...

A wounded albatross Brendon Sewill llow seriously should one take the political t hreat to the banks? Which is more significant: the fact that the Prime Minister let it be...

Christopher Fildes The big London banks are totting up the figures for what has been the most profitable year in their history. But it has not been a year to repeat. It saw a...

Money rates and the clearing banks

Sir: In her Christmas message the Queen appealed for a spirit of reconciliation. May we pray that her advisers, who are our rulers, will respond to this appeal with regard to...

their education in England— at English public schools and English um v e.rsities. What they knew of Scottish his t°rY, therefore, was about the same as their knowledge of, say,...

Sir: John Grigg's observation that anybody `who calls himself a Trotskyist . . is deliberately giving his allegiance to a tyrant' (8 January) is a timely reminder that Trotsky...

Sir: 1 am collecting reminiscences and recollections about the late Sir Malcolm Sargent for a book, The Essential Malcolm, and through the courtesy of your paper would like to...

Sir: Nicholas von Hoffman, a regular contributor to the Washington Post for many years, always had a reputation for trying to be amusing at someone else's expense. His...

Sir: Mr Wheatcroft is slightly incorrect in saying that the Kelvin is a new temperature scale (15 January). It has been used by scientists for a number of years now as the...

Sir: My colleagues and I have been most interested to read Norman Rosenthal's article on The future of the RA (1 January) and are very grateful for so thoughtful and clearly...

Sir: Although inspired by reasons of economy and lack of resources the decision of the National Front to ask prospective parliamentary candidates to guarantee 50 per cent of his...

Sir: Despite your editorial (15 January) there were overriding arguments that Abu Daoud should never have been arrested in the first place. Over the last few months of 1976 a...

Sir: It is a pity that your perceptive and amusing contributor George Gale is a despiser of cats. His review (1 January) did not mention the three advantages they possess over...

Sir: It is not often that I agree with the television reviews of Richard Ingrams, which, week after week, continue to deface the pages of the Spectator with his moronic...

Sir: Critics cannot be students of the subject matters in books. As fine a review of Miriam Benkovitz's Frederick Rolfe: Baron Cory° as Paul Fussell did (15 January), he was at...

John Terraine Guerrilla: A Historical and Critical Study Walter Laqueur (Weidenfeld and Nicolson £8.95) The enemy advances, we retreat; the enemy camps, we harass; the enemy...

Christopher Booker Utopia and Revolution: On the Origins of A Metaphor Melvin J. Lasky (Macmillan £15.00) Once long ago men lived in innocence and b rotherhood. Today all is...

Leo Abse Safe on a Seesaw Tom Hart (Quartet Books £4.25) When, in Liverpool, the first local society for protecting abused children took action to establish a Home for...

Richard West Dust of Life: Children of the Saigon Streets Liz Thomas (Hamish Hamilton £4.50) Of all the millions of foreigners who went to South Vietnam during the civil war,...

Machines for sitting on Helen Smith 'The steel upright chair is comfortable, light, easily cleaned, lasting, unbreakable and beautiful. Those to whom its austere sweeping...

Penelope Gilliatt Along with spies, pregnant women, and chefs, film archivists are probably one of the most paranoid groups in society. The great Henri Langlois, founder, sage...

Memoirs Richard lngrams So me weeks ago I commented on Peter "all's overpaid appearances on Aquarius under the impression that all he did was to Provide suitable introductions...

Philip Hope-Wallace Reportedly full of resentment, as can be the case with a darling of the public when they get on a bit, elderly certainly, in her eighties —and that sounds...