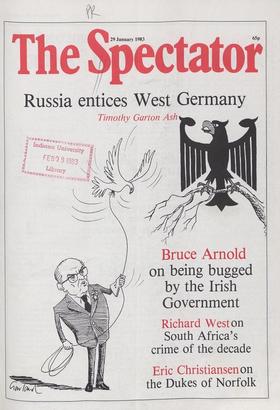 S ince there is no fixed date for a general election in Britain except that it may not be more than five years after the last one, the choice of the precise day is in the hands...

For their own good Colin Welch A much as any Victorian mill-owner the ogre Tebbit would seem to need good stout gates. His recent concern about them appeared most natural....

W hen I was in the army, a soldier, unqualified to drive, took a Bren-gun carrier without permission, knocked down a lamp post and killed a passer-by. His commanding officer...

Coppers' nark Auberon Waugh G enerally speaking I attribute the extreme unpopularity of the press in Britain to the hypocrisy of the British, their extreme terror of being...

Timothy Garton Ash W ith an election in view, Mrs Thatcher flies to the Falklands, celebrating the triumph of British arms. With an election I mminent (on 6 March), Mr Vogel,...

Yasu and Ron and pinch me

Murray Sayle Tokyo O h, what a tangled web we weave, when we go on and off the record! Only a Week ago, Japan had a brand-new, energetic Prime Minister, promising, in a...

State of the Deficit

Nicholas von Hoffman B efore the Chief went up to the Capitol to give the obligatory State of the Union address, his supporters hired a hall to celebrate the second anniversary...

The murder of Mr Smith

Richard West D uring my stay last month in Johannes- burg there was, as usual, no shortage of startling news: South Africa's raid on Lesotho, the verdict on Neil Aggett, found...

The Times gives some curious ,statistics of the Quaker body, or, as they call themselves, 'The Society of Friends'. They are now reduced to 17,977 members, or probably 7,000...

Bruce Arnold Dublin harles Haughey's dealings with political journalists are at heart unsatisfactory, and always have been. Although he has regarded himself at all times as an...

Always bores on Sunday Paul Johnson W hich is the bigger threat to Fleet Street: its propensity to bleed itself to death by suicidal strikes, or its increasingly marked lack...

Sir: Cohn Welch's staunch defence of Mrs Thatcher's actions in dealing with the Falklands crisis (22 January) comes as no surprise; even those of us lacking the innate Tory bent...

Sir: I write to defend the CEGB against a vile injustice perpetrated by Mr Richard West in his article on Sizewell (15 January). Mr West suggests that the CEGB forces the...

It passeth all understanding Sir: The Ecumenical Movement has always left me pretty cold, perhaps as a result of the influence of a Jesuit priest who taught me religious...

The example of Eigg

Sir: Michael Bywater's article on a Hebri- dean funeral (1 January) brought out the poignant contrast between the dignity of that sad occasion and the Las Vegas baro- que of the...

Strawberry leaves for ever Eric Christiansen The Dukes of Norfolk John Martin Robinson (O. U . P. £12.50) T o the noble dynasty of Howard belongs a distinction rare among...

A chronicle of resistance

Bohdan Nahaylo Notes of a Revolutionary Andrei Amalrik (Weidenfeld & Nicolson £12.50) ndrei Amalrik was one of the outstand- ing figures of the Soviet dissident movement. His...

Wider yet and wider

Francis King A Bloodsmoor Romance Joyce Carol Oates (Cape £9.95) A ways ambiguous in aim and often wavering in execution, this is a rum book to come from one of the best and...

Anything goes, by numbers Rodney Milnes The Magic Flute (Scottish Opera) his is not going to be easy to write. It is well known that Jonathan Miller (Flute) loathes critics...

Lost marbles Taki rr here are too many people writing about the Elgin Marbles who have no business doing so — especially in the Spectator. I and I alone know anything about...

Promises Richard Ingrams The BBC's God Slot, so long a regular 1 part of Sunday evening viewing, seems to have rather disintegrated. Ever since I can remember, there has been...

Out of the mouths Jeffrey Bernard I f the a g e of consent was raised from 16 to 50, lunatic asylums would be empty. came to that conclusion a g es a g o and lon g before...

Mass murders Patrick Marnham T he EEC a g reement which has just ended a seven-year fishin g dispute has been described as 'superb' for Britain, and even the Danes are happy....

A steady diet Jon Speelman Tn order to avoid a clash with the Olym- piad or Interzonals, the annual Sochi chess tournament was moved this year from its usual slot of...

No. 1254: No stars Set by Jaspistos: What are the features of a very ill-run hotel or boarding-house which a guest should prepare himself for? Six ex- amples, please, within...

Jaspistos reports.' Competitors were asked for an extract from a detective story in which the sleuth is Robin Thin, 'a bumb - ling, egocentric, effeminate pseudo - intellectual...

A prize of len pounds will be awarded for the first correct solution opened on 14 February. Entries to: Crossword 592, The Spectator, 56 Doughty Street, London WCIN 2LL. In...

T he resignations from the Opposition front bench of the former deputy Prime Minister of Ireland, Ray MacSharry, and former Minister of Justice, Sean Doherty, followed...