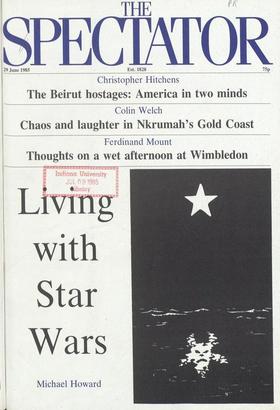 P olice investigating the Brighton bomb- ing arrested five people in Glasgow; this led to the discovery of a time bomb in a tourist hotel near Buckingham Palace, meant to...

STOP OF THE POPS

THE news that 'Pop', the senior group of prefects at Eton, is to be deprived of its independence, is extremely sad. Pop is self-electing, a survival from the better age of...

EEC SPENDING GROWTH: HOWE, BUT WHY? I f the Foreign Secretary, Sir Geoffrey Howe, is to be believed, Britain entered a new era in its relations with the EEC on Tuesday night....

WHATEVER the shortcomings of the EEC they are as nothing compared with those of Eastern Europe's 'economic com- munity', Comecon, which also holds a summit meeting this week....

We offer our congratulations to Raymond Keene, the Spectator's chess

correspon- dent, on being awarded the OBE in the Birthday Honours List. The award is for his services to chess, rather than to the Spectator, but he deserves one for both.

How to bet at Brecon and Radnor BRUCE ANDERSON F or the past few days, parliamentary candidates, MPs and journalists have been struggling to remember the difference be- tween...

Charles Moore will resume his column next week.

T here are few political fates more harrowing than to be a candidate fighting a by-election. You are on constant display, as you are not at a general election. You are...

Prince Philip decides to take a hand in the government of the country AUBERON WAUGH Oddly enough, I had just received a similar report from my younger daughter about living...

Michael Howard examines how we should respond to the Strategic Defence Initiative, this week promoted in Europe by Vice-President Bush PERHAPS the most remarkable aspect of...

Charles Glass on relations between the Western press and Amal Beirut TWO WEEKS ago, before the hijacking of TWA flight 847, there were not enough Western journalists here to...

Christopher Hitchens on the American public's two-minded reaction to the Beirut hijacking Washington A HELLISH week for America, and a ghastly week, too, for those who like...

THE recent disclosures about the traffic which supplies Queensland with the labour wanted for the cultivation of sugar do not give a very encouraging view of Native chances in...

NOT A CHOCOLATE REVOLUTION

Ambrose Evans-Pritchard on the Sandinistas' efforts to make Nicaragua Marxist Managua IN THEY came: Comandante Daniel Ortega, President of the Republic, striding forth in his...

Ferdinand Mount observes the contrast between loutish players and gentle crowd 'I DON'T care how long we have to wait, Fiona, I'm not going back to Bishop's Stortford until...

The press: Paul Johnson on Murdoch and Maxwell's other interests THE correct relationship between a news- paper owner and those responsible for the editorial policy of his...

INVESTMENT managers, who hate hav- ing to think for themselves, are in for some unwanted exercise next month when Carl- ton Galleries comes to market. This is the new name for...

TEXT for the Cabinet tax-cutters, as they wrestle with the consolidators: 'For their merchants, if they flourish not, a kingdom may have good limbs, but will have empty veins,...

CHARACTER sketch at a City luncheon table: 'Yes, he's the El Cid of the market — leading his troops into battle, dead for 30 years with an arrow in his back.' No, not who you...

Worse than the Crown Agents can it be possible? CHRISTO PHER FILDES T he dust settles over Threadneedle Street, and the Bank of England can be discerned, battered but in...

THE luckless shareholders in L. Texas Petroleum (Deep in the heart of Texas': City and Suburban, last week) have now heard from their company, though not to their advantage. A...

Sir: In congratulating Mrs Thatcher (Another voice, 22 June) on having in- cluded a number of Jews and Negroes in her Cabinet, I should, of course, have written four Jews and...

Sir: In an otherwise comprehensive selec- tion of newspaper and magazine cuttings that put the blame for Liverpool's decline as a port on the dockers and working classes,...

Sir: Followers of the 'Low life' column may be interested to learn that she who would drown in Mr Jeffrey Bernard's eyes is normally a woman of discretion. However, realising...

Sir: Writing on the bodyline controversy, my friend Mr Richard West mentions the way in which English cricketers on tour in Australia could expect 'beery and very explicit...

Sir: In his incomparable story, The White Company, Sir Arthur

Conan Doyle has young Alleyne go to the rescue of an elderly Italian painter of glass, one Agosti- no Pisano. Pisano has been rudely handled by a group of archers and says to...

Chaos and laughter in Nkrumah's Gold Coast COLIN WELCH 0 n what would have been Klemper- er's 100th birthday, BBC2 re-broadcast a film of him, already 78, conducting Beet-...

Old Hem, the sea and a kid brother Patrick Skene Catling WITH HEMINGWAY: A YEAR IN KEY WEST AND CUBA by Arnold Samuelson Severn House, .£16.95 THE DANGEROUS SUMMER by Ernest...

A reputation established by a wife

Shirley Robin Letwin TROUBLED LIVES: JOHN AND SARAH AUSTIN by Lotte and Joseph Hamburger University of Toronto Press, £30 F or some time now, we have been getting the...

Contents of a large wainscot chest

Allan Massie SO FAR FROM GOD by Patrick Marnham Cape, 0.95 SUNRISE WITH SEAMONSTERS by Paul Theroux Hamish Hamilton, £12.50 T here is something pretty depressing about...

In meadow grass the crickets call for mates. Their high, insistent bowing scores the air, and like the keenest scores, it orchestrates a mood. The moonless night displays a rare...

I am bitten by the thorns of the roses. They hang about my jacket in a fierce clutch of claws, invisible and catlike. My knuckles are a red astronomy. Such stars, such stars,...

Pym's No. 1 Francis Kin g CRAMPTON HOD N ET by Barbara Pym Macmillan, f8.95 I f, like E. M. Forster with Maurice, a novelist suppresses one of his works be- cause its time...

Christopher Hawtree THE FOXGLOVE SAGA, PATH OF DALLIANCE, WHO ARE THE VIOLETS NOW?, CONSIDER THE L1LLIES, A BED OF FLOWERS by Auberon Waugh Robin Clark, £4.95 each T he...

Simon Blow ELVIS AND GLADYS by Elaine Dundy Weidenfeld & Nicolson, £12.95 W hy do stars so often seem to have proverbially unhappy lives? One really wonders if stardom is worth...

All at sea in London and Cornwall

David Sexton FOREIGN LAND: A NOVEL by Jonathan Raban CollinslHarvill, £9.50 T hree years ago Jonathan Raban wrote an article in the Sunday Times about learning to sail — 'a...

Glyndebourne New-found joys Jeremy Lewis T he first time I went to Glyndebourne was in about 1960, when I was in my late teens. Walking round the gardens before the...

A move to Cork Street Alistair Hicks A ccording to popular myth, every- body and anybody is capable of discovering artists. Indeed Tariq Ali, in his recent Channel 4...

A Midsummer Night's Dream (Regent's Park) A measure of magic Christopher Edwards T he search continues for a bigger and better excuse why weekly copy cannot be delivered to...

Overdoing it with roses Ursula Buchan T he end of June is the time, par excellence, for overdoing it in the garden. Not, that is, overdoing the work, although there is plenty...

Another look at China Peter Levi H ow impotent television makes one feel. The confident predictions of the weatherman make one lose hope of the weather ever altering, and the...

Snobs and yobs Tali S ome fellow I've never met or heard of told a friend of mine that I was a terminal snob. My friend, like a good Englishman, shrugged and asked him why he...

Jeffrey Bernard is in Tunisia.

Trust the speaking voice P. J. Kavanagh T here used to be a feature in the Reader's Digest called 'The Most Un- forgettable Character I Have Met'. Perhaps there still is. The...

No. 1378: Ungallantry Set by Jaspistos: You are invited to write a poem (maximum 12 lines) beginning, like Leigh Hunt's famous one, 'Jenny kiss'd me when we met', but...

Jaspistos reports: Competitors were asked for a Nutter's Short History of the World. I think G. K. Chesterton once said that the distinguishing mark of the lunatic is that he...

Bordeaux '84 IF THIS report reads more like a stock- market analysis than a wine column, don't blame me: the subject is Bordeaux, and as everyone knows, Bordeaux is not just...

There is now a charge of 1 per insertion (max. 2 books). Cheques made pay- able to The Spectator. Please send details to Books Wanted, The Spectator, 56 Doughty Street, London...