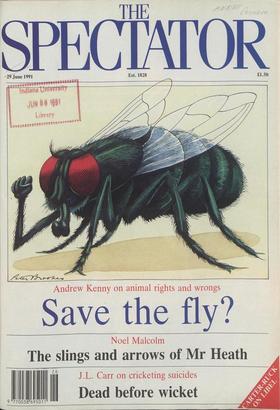 M r John Major, the Prime Minister paved the way for the weekend EEC summit by meeting M. Mitterrand, the French President, in Dunkirk. He obtained assurances that Britain would...

The slings and arrows of Mr Edward Heath NOEL MALCOLM Some critics, contemplating the plot, would disagree with Eliot. They would remind us that Hamlet belongs to that spe-...

O nly a few more weeks and it will be time to go back to Chiantishire; one of the great pleasures of our time there is the chance of a few dinners with Muriel Spark. Last summer...

Why we should declare a civil war against the unspeakable puritans CHARLES MOORE W hen Guy Crouchback heard of the Nazi-Soviet Pact, he felt a huge sense of exhilaration. At...

AND NEVER THE TWAIN SHALL MEET?

Anne McElvoy argues that monetary union has been no solution for the two Germanies A YEAR ago on Monday, the two Ger- manies plighted their troth by introducing a unified...

MR. Henry Campbell, M.P., Mr. Par- nell's private secretary, was accused by the Cork Herald of "hiring houses for the immoral purposes of his master," and brought an action for...

How to save yourself 51 trips to the library . . . or over £30 on The Spectator If you're forced to share The Spectator with fellow students, then you'll know how difficult it...

NOT THE COMMON HURD

the summit season with more influence than any modern Foreign Secretary AS BRITAIN prepares for possible ambush by her European partners in Lux- embourg this weekend, she at...

Henry Porter argues that the people of Liverpool are to blame for their city's filth and decay Liverpool COUNCILLOR Roger Lafferty had been eager to enter the debate on...

GREAT effects have great causes. But this principle does not apply in human psychology. As one grows older one realises that it is the trivial in life that really counts....

WHAT WILL WE BE FIGHTING FOR?

Robert Fox argues that we are cutting our armed forces before we have decided what they should be doing ONE of the regimental heirlooms of the 14/20th King's Hussars is a...

OPEN LETTER TO AN IRON LADY

Paul Johnson argues that Margaret Thatcher should not allow them to expel her from the Commons Dear Margaret, You are under pressure from the more fanatically pro-European...

THE unknown chairman, Robert Evans of British Gas, has at last got himself on the map. His BG pay rise is supposed to be based on performance. If so, it implies that he performs...

Seven get the Itch

BAD news — Chancellor's Itch is conta- gious. That is the finding of research teams in the City and Suburban laboratories, where this blight was first identified. Stu- dies of...

SOME folks — as Moose Malloy said when he flattened the barman in Farewell, My Lovely — have the wrong idea about when to get tough. This includes the Midland Bank. It has...

Sir: Dominic Lawson, in his diary (8 June), suggests that he finds the Independent's coverage of the royal family 'eccentric', in particular their lack of reporting on Prince...

Sir: Paul Johnson, in his recent article on the media, ('To sue or not to sue', 25 May,) criticised the behaviour of the Observer following Mrs Edwina Currie's successful action...

Sir: Your diarist Dominic Lawson (8 June) is unfair to Walpole in the matter of tennis balls. Of course, every schoolboy knows that poor Fred was killed by a cricket ball but he...

Sir: Jeffrey Bernard amiably chides me for having omitted (Books, 8 June) Auden's description of himself as a `wedding cake left out in the rain'. Had I been unwell, perhaps?...

Sir: I read Vicki Woods' article (`My African baby', 11 May) with a mixture of concern and empathy. Concern, because we depend on people like her. Empathy, because we try to...

Sir: Mr Andrew Gimson (Politics, 8 June) says that in the last Tory leadership elec- tion he `supported Mr Hurd on the jejune grounds [among others] that he was the only Tory...

Sir: I am writing to you on behalf of myself and my female friends and relatives to thank you for printing Auberon Waugh's marvellous piece on women who ask for it, (Another...

With never a stain the pavilion of Heaven is bare

A bourgeois fleeing up the Amazon

Philip Glazebrook THE SADDEST PLEASURE: A JOURNEY ON TWO RIVERS by Moritz Thomsen Sumach Press/Century, f12.99, pp.2 76 T he author of this discursive and engrossing book of...

Afternoon and evening of a faun

Richard Buckle T he subtitle of Tamara Nijinsky's book, `Two Lives from Birth to Death Indissol- ubly Linked' is clearly inaccurate, because the dancer and the Hungarian...

A rather susceptible Chancellor

Alexander Chancellor THE HOP QUAD DOLLY by Simon Carr Hutchinson, f11.99, pp. 188 I hope that Lord Dynevor is a tolerant and forgiving man — at any rate more tol- erant and...

A conversation reported in Ginsberg by Barry Miles But what happens if I get old or something? Asked the most famous poet on the planet Really wanting to know. What happens if...

The prerogative of the pundit through the ages

Simon Heifer JOHN MAJOR: THE MAKING OF THE PRIME MINISTER by Bruce Anderson Fourth Estate, f16.99, pp. 324 I n my more imaginative moments I have thought of writing a biography...

David Robinson BEHIND THE MASK OF INNOCENCE by Kevin Brownlow Cape, £35, pp. 579 O n the eve of the second world war, the British film censor, Lord Tyrrell of Avon, declared...

Publishing the whole of E.M. Forster

Christopher Hawtree E .M. Forster was a prolific writer. This is no fanciful assertion. It is all too often forgotten that between 1905 and 1910 he published four novels whose...

Hugh Cecil T en years ago I illustrated a series for Walker Books, Teddy Tales, which I based on stories which I had told my children about their toys. Doodling bears' faces...

The Caretaker (Comedy) Vintage Pinter Christopher Edwards T his year there has been something of an unofficial Pinter festival to mark the playwright's 60th year. We have...

No tax, please, they're artists Alistair McAlpine T he Chancellor of the Exchequer in his last Budget gave a hint to the men who col- lect the value added tax. He suggested...

My lucky day Taki S usan Gutfreund, Ivana Trump and Judy Taubman were in town last week and for one horrible moment I thought I was back in the Big Bagel. In a packed...

It's a washout Martyn Harris T he highlight of any Wimbledon, and true test of a commentator's mettle, is the complete day's washout, though this should ideally start in the...

On the loose Zenga Longmore Af ter the heady pleasures of St Malo, gloomy England seems hard to bear. I said as much to one of the hippies from next door as Omalara, the said...

NOW then, first things first. On Friday 21 June, the feast day of St Aloysius Gonza- ga, also the longest day, a baby girl was born to Charlotte Amory, wife of our beloved...

Sheer genius Raymond Keene S ome talk of Alexander, and some of Hercules; Of Hector and Lysander, and such great names as these goes the refrain of the British Grenadiers....

You are invited to provide an extract from a brochure from a school which is keen to attract pupils, but whose advertising style and content are unlikely to attract parents....

Imputing mixed motives Frank Keating DROWNED perhaps by the slosh of rain and the slurp of dollars, at least the hermaphroditic grunt of the women com- petitors seems more...