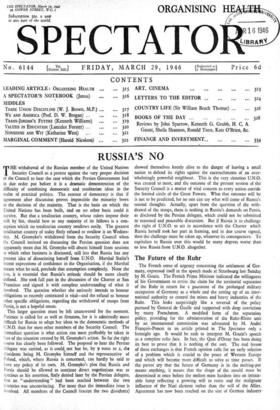 T HE withdrawal of the Russian member of the United Nations Security Council as a protest against the very proper decision of the Council to hear the case which the Persian...

The Future of the Ruhr

The French sense of urgency concerning the settlement of Ger- many, expressed itself m the speech made at Strasbourg last Sunday by M. Gouin. The French Prime Minister indicated...

The housing statistics are now awaited and scanned with almost

as much interest as the racing and football results and with equally small satisfaction to those who have a material interest in the issue. The number of families rehoused,...

Women and the Land

The Women's Land Army has chosen its month well for a campaign for 30,000 more workers. In April most town-dwellers feel the appeal of the country strongest—and it is in general...

The Cabinet mission to India is getting down to work. The pre- liminaries are over and their effect has been to create a propitious atmosphere for the vital discussions which...

The Boundary Commission which is examining on the spot the question of the frontier between Italy and Yugoslavia continues its work in an atmosphere which is steadily growing...

T HE National Health Service Bill is designed, in the words of its opening paragraph, " to provide for the establishment of a comprehensive health service for England and...

I am glad to learn that the intolerable proposal to

construct a greyhound racing track near Gold Hill, between Gerrard's Cross and Chalfont St. Giles, has been emphatically vetoed by the local district council. Quite apart from...

Members of Parliament who were taken by the Ministry of

Civil Aviation to see Heath Row aerodrome—or London Airport, as it is to be celled henceforward—got back to Westminster with slightly divided minds. The. size of the aerodrome...

affirmed that man was a political animal. His present-day successors (though the succession has experienced a good many adventures through the centuries) are political past any...

T HE Labour Government has now been in office for eight months. Mr. Attlee had no easy task in choosing his Front Bench, but in the main his selection has been well justified....

When the personnel of the future Coal Board, minus its

vice- chairman, was announced I commented on the excellence of Mr. Shinwell's choice. Tuesday's further announcement, that the vice- chairman is to be Sir Arthur Street, raises...

It is an interesting coincidence, but there is no reason

It sounds as if something more than chance had carried

Mr. Isaac Foot, President of the Cromwell Society, to the Lord Mayoralty of Plymouth precisely three hundred years after the siege of Plymouth by the Royalist forces was raised...

By W. J. BROWN, M.P. T HE country has recently been perturbed by an outbreak of strikes, and it has the uneasy feeling that these may be only the prelude to more widespread...

By KENNETH WILLIAMS C OMPARISONS in Arab affairs are generally things to avoid, but it is safe to say that no treaty which Britain has made with an Arab country has been...

By LANCELOT FORSTER T HANKS to the devastation caused by the world war and the universal poverty that has followed, there has naturally arisen a demand for that form of...

By KATHARINE WEST S HOULD the British Council or arty other body concerned with the " projection of Britain" endeavour to make known abroad the unique British heritage of...

By HAROLD NICOLSON U NLESS some last-minute hitch occurs the Greek elections will be held on Sunday next, March 3rst. It is, as we well know, impossible to forecast the result...

THE curious thing about this week's tour of the galleries is that between Christopher Wood's familiar lyrical fire at the Redfern and Alfred Stevens's grandiose Italianate...

SOMEHOW it came without that shock to sense Pondered and long expected. No white cliffs Shining in watery sunlight. No green fields Startling the eye inured to yellow flats...

The Corn is Green." At Warner's.—" The Bells of St. Mary's." At the Carlton. The Corn is Green is a puzzling film. It attempts the respectful treatment of a serious subject ;...

Sta,—Sir Richard Winstedt is a great authority on Malayan matters and his article, " Sharp Practice in Malaya," will have been read with interest and accepted with respect by...

Sta,—D. E. Estcourt's views of army life in peace-time are strange indeed, and seem to be hopelessly confused with purely war and imme- diate post-war phenomena, such as crimes...

" LIBERAL STOCKTAKING " Snt,—The paistgraph in the " Spectator's Notebook " on March 22nd on the Liberal stocktaking was both timely and pertinent in its probing of the real...

perhaps I may be allowed to make some observations from a slightly different angle. I have read . with care the full report of the debate in Parliament on March 8th, and could...

POLAND BEHIND THE " IRON CURTAIN "

SIR,—When postal communication with Poland was restored in the second half of the last year, no restrictions were placed on the sending of books and papers. However, in January...

"THE TREND OF OPINION IN GERMANY"

SIR,—In your issue of March 22nd, in a letter from Dr. A. H. Brauer, "The Trend of Opinion in Germany," there occurs this sentence: "Unfortunately, Stresemann died too early—the...

SIR, —The two most important speeches made since the end of the war are undoubtedly those of Mr. Churchill at Fulton, Missouri, and of Marshal Stalin in his Pravda interview....

LET OUR YOUTH SEE THE EMPIRE

Silt,—The question of compulsory national service for youth is again under discussion, and most people will agree that something of the kind is necessary in the present state of...

SIR,—D. E. Estcourt has done a great service to this

country by putting the case against conscription with such convincing force. It is to be hoped that some of the " strangely silent " philosophers and historians will take up the...

SIR, —The article on Toulon which appeared in your columns some time ago has finally reached that town, where it has caused much resent- ment. My brother-in-law, M. Jean...

Ste,—Many of your readers will agree with Mr. Harold Nicolson that few people today remember Samuel Rogers because of The Pleasures of Hope. Some of us, however, remembet him...

ALL gifts to the National Trust are interesting ; but the latest has for me a peculiar interest. A good piece of it is to be a sanctuary for bird, butterfly and plant, and this...

Sta,—Your last week's correspondent brings to light three unfamiliar aspects of affairs in Egypt. First, he says that, if British power had been more constructive in the past,...

Ugly Relics Along this delectable stretch of coast is a

narrow valley edged by a marram-covered dune and high gorse-clad hills. Its amenities were improved rather than sophisticated by one of the most amazing golf- courses in...

A recent discourse by a great specialist on garden hedges attracted me, for the garden hedge is a grand subject ; but I was disappointed to find myself disagreeing with a good...

SIR,—The article by Dr. Douglas McKie in your issue of February 22nd lays undue emphasis on the share which Great Britain has had in the development of the practical use of...

I read the other day in a book by a great agricultural specialist that men ought not in these days to be asked to deal with manure manually . Later I came upon the following...

The Great Cardinal John Henry Newman. By John Moody. (Sheed and Ward. 15s.) MEMBERS of the church in which Newman died will be reassured to learn that this book carries the...

The Evolution of Modern Latin America. By R. A. Humphreys. (Oxford University Press. 78. 6d.) DR. HUMPHREYS has made a timely and most valuable contribution to the literature...

A Challenge to Educationalists

Total Education. By M. L. Jacks. (Kegan Paul. 15s.) THIS is a very important book ; far-reaching social consequences might follow if it were to be widely read. From the outset...

Yes, Farewell. By Michael Burn. (Cape. 12s. 6d.) How expensive novels are becoming! To me they always seemed too dear even in the seven-and-sixpenny days, for novels are not...

Exeter Phoenix. By Thomas Sharp. (Architectural Press. 10s.) ANY Exeter ratepayer is advised to begin this book, which sets out Mr. Thomas Sharp's plan for Exeter, at page 35....

"THE SPECTATOR" CROSSWORD No. 368 [A Book Token for one

guinea will be awarded to the sender of the first correct solution of this week's crossword to be opened after noon on Tuesday week, April 9th. Envelopes must be received not...

SOLUTION TO CROSSWORD No. 366

The Conquest of Disease, the Story of Penicillin. By George Bankoff, M.D. (MacDonald and Co. 6s.) Tins is a book evidently written for popular consumption, dealing mainly with...

By CUSTOS NOT for some years past has the Stock Exchange been so obsessed by Budget possibilities as it is now. There is no questibn, of course ; about the general framework of...

A Page of British Folly. By R. F. Harrod. (Macmillan.

Is. 6d.) IN this lively pamphlet Mr. Harrod states with conviction and some passion the case for close economic co-operation between this country and the United States. The...