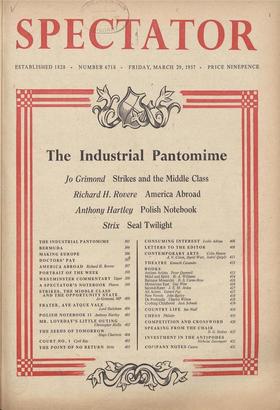 I T is no longer easy, in spite of their apparent menace, to take the present industrial disputes seriously. They resemble nothing so much as one of those amateur panto- mimes...

j. HE most certain fact about the Bermuda con- ference is that Mr. Macmillan did not play golf. On everything else greatly differing commen- taries have been published, ranging...

T is difficult to realise that the signing of the Itwo treaties for a common market and for Euratom in Rome last Monday may one day come to be regarded, in the words of M....

I T is high time the sultry air that has been gathering round the medical profession for some years was cleared; and perhaps the threat of the British Medical Association to...

By RICHARD H. ROVERE New York A GREAT deal is being made •of our willingness to accept a kind of associate membership in the Baghdad Pact, as announced a few days ago in...

It was very disappointing that high winds in Bermuda robbed us of the sight of Presi- dent Eisenhower and Mr. Macmillan riding in a carry- car down the fairway of the Mid-Ocean...

WHAT really ought to be done about Commander Noble is far from clear. Immediate transfer to one of the more remote of the back benches would help, certainly; but just think whom...

THE NEWS that has been sent from Cyprus during the last fortnight must, intentionally or not, have strengthened those members of the Cabinet who believe with General MacArthur...

A BOOK ON the Russian Revolution by Sir Robert Bruce

Lockhart (The Two Revolutions, Phoenix House, 10s. 6d.) is something of an event. Sir Robert was a splendid example of those atypical geniuses who luckily for us lurk, suspect...

TELEVISION is already beginning . to add an extra dimension to

some news stories; I would have been sorry to miss a couple of strike incidents caught by Independent Television News—still far ahead of the poor old BBC news team. One was an...

NEWSPAPER ESTIMATES of what their readers most want to know

about people in the news are nearly always odd. The commonest description of Lord Altrincham, who this week resigned from two committees of the Victoria League in protest...

• Randolph Churchill and an order for What I said

about the Press, although on a higher level Smith's had refused to have anything to do with the book. and said I would be interested to hear the sequel. (Smith's, incidentally,...