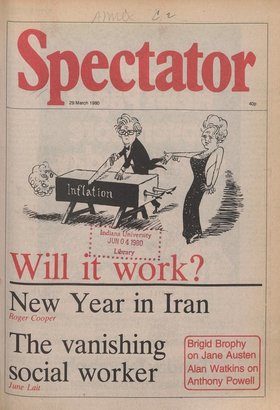 Not tough enough yet

Political commentary Howe: the Critical Heritage Ferdinand Mount If you look in a bookshop these days for a writer who is famous without being popular - somebody like Swift...

Notebook George Hutchinson, deputy editor of the Spectator for the past four years, died on Wednesday morning. For several months he had been struggling against cancer with a...

Another voice His greatest friendship Auberon Waugh For nearly six weeks the Shah of Persia has been inhabiting my drawing room and kitchen as my poor wife struggled against...

The populism of Mr Reagan

The populism of Mr Reagan Henry Fairlie Washington 'My son's only 12 years old, and he can understand Ronald Reagan's issues.' was the comment the other day of one Linda...

The Pope and the Ukrainians

The Pope and the Ukrainians Peter Hebblethwaite Rome Unly six days before the event, it was announced in Rome that a synod of the Ukrainian Catholic Church would be held Ill...

Pleasures of the old East

Pleasures of the old East Richard West Macao Although I have often been in Hong Kong, I had never before made a trip to the neighbouring colony of Macao - at first because I...

The vanishing social worker June Lait It is widely held that consumers are not the best judges of what they consume. The manufacturer of shoes that disintegrate on first...

Stirling on the gold standard

Stirling on the gold standard Gavin Stamp Rumour had it that this year's RIBA Gold Medal was to be awarded to Berthold Lubetkin, the ex-Russian architect of the Penguin Pool...

Let the best parent win Alastair Forbes Stranded, a couple of autumns back, in Frankfurt, with an hour or two of that 'time to spare' so often available, as the saying goes,...

Letters - The free market Sir: Shirley Robin Letwin, in her review of the Friedmans' new book Free to Choose (15 March), is too generous to one of the most honest...

Bookerbuyer Sir: I have never met or corresponded with Christopher Booker; my introduction to his writings was made when Lawrence Durrell sent me a copy of The Neophiliacs, a...

Whig history? Sir: Whatever the merits of Paul Johnson's view of Edmund Grindal (8 March), it is certain that he cannot be allowed to disseminate the pass& idea that Puritans...

Anacronysm Sir: As one of your readers who seeks to proselytise on your behalf ('the best-written journal in London', I say) I was rather taken aback to see that your Tim...

Killanin's qualities Sir: Entries in Who's Who rarely give a true picture of their subjects. Alexander Chancellor in his recent efforts to evaluate the Chairman of the...

Gnostics and Quakers Sir: In reply to R.S.W. Pollard's letter (22 March), the inclusion of Quakerism with Christian Science, Theosophy, and Scientology as modern...

Sea voyages Sir: Last year you were kind enough to publish a letter from me asking for suggestions for a proposed anthology of railway journeys. The response from your readers...

Sir: Mr Pollard understandably questions in his letter of March 22 the links between Gnostics and Quakers. A similar query can be raised in relation to Christian Science. While...

Faces in my Time Anthony Powell

Spring Books I The ball rolls on Alan Watkins Faces in my Time Anthony Powell (Heinemann £8.50) I have always taken an almost proprietorial interest in the writings of Mr...

The Innocent Diversion: Music in the Life and Writings of Jane Austen Patrick Piggott

Anti-venereal? I Prue Shaw I Boccaccio's Two Venuses Robert Hol- I lander (Columbia £9.85) Italian critics sometimes refer to the Decameron as 'il miracolo', so little do...

Perhaps not Benny Green Dreams of Adventure, Deeds of EmpirO Martin Green (Routledge £10.50) That there is a sore need for a book which examines the interaction between the...

Doctor Fischer of Geneva or The Bomb Party Graham Greene

Despairing Francis King Doctor Fischer of Geneva or The Bomb Party Graham Greene (Bodley Head £4.50) Just as, apart from his epilepsy, the one biographical fact that...

Theabe A sorry tale Peter Jenkins Othllo (OlMer) The problem with Othello is Othello. The character is less than convincing. if F.R. Leavis is right and his nobility is 'but...

Art Taped John McEwen If you want a visual restorative this budget Week go and see the new abstract work of Stephen Buckley: a dozen paintings at Knoedler (till 6 April) and...

High life Vegetables Taki Recently I was sitting in the smallest room of my house - that particular place where H.G Wells liked to read what the critics had to say about his...

Television Show-stopper . Richard Ingrams Ms Arianna Stassinopoulos. the striking Greek lady personality, is something of an enigma. She made her name as an opponent of the...

Low life Brioche Jeffrey Bernard I was invited, along with another thousand or so people, to Tramp's last Monday evening to see Thea Porter's new collection. I am not in the...

Postscript Pax vobiscum Patrick Marnham Lord Fisher, when recently retired as Archbishop of Canterbury, was asked if he ever suspected that English Catholic commitment to the...