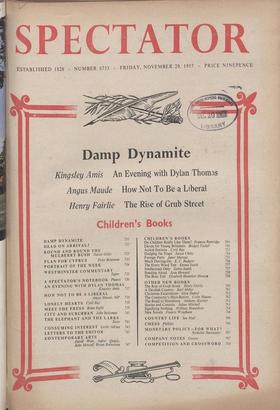 ' HIS Man Is Dynamite,' the Daily Herald has been T telling us, in a profile of Mr. Frank Cousins : 'he knows where he is going.' Reading the articles at the breakfast table—if...

Round and Round the Mulberry Bus

By DARSIE GILLIE P You would have to go a long way 16ack to find a visit by a British Prime Minister to Paris during which helmeted riot police were on guard outside the British...

T now looks as though there is some danger of I any new plan for 'interdependence' having to be marked 'DOA' at the December NATO meet- ing in Paris. President Eisenhower's...

By PETER BENENSON Nicosia T is eight long months since Eoka called the I truce and Makarios was freed. Since then the British Government has reappraised its strategic policy,...

We tend here to think of the press as some-

thing independent of, occasionally even menaced by, advertising. A few days in the US is enough to show how utterly false this is—and the incalcul- able extent to which the...

THE INCOMPARABLE strength of Richardson—it hag been said a thousand

times before, and it is true' is his understanding of the goodness and simplicity of ordinary people.

A VARIETY OF MODELS

A selection of Books for the Young

book for which all Malcolm Saville's enthusiastic readers and Lone Pine Club members have been waiting, with a setting right in the heart of the country's capital city. It is a...

Eleanor Farjeon's The Children's Bells is Jr signed as a

companion to her collection of storie s The Little Bookroom. The poems vary in 1 11 ° °c1 Some may find her verse a little whimsical (`A ° , • I will get out when the water goes...

No marks to the Harvill Press for reissuing Mrs. Molesworth's

two fairy stories with only two mingy frontispieces. They lose enormously from being stripped of their Victorian engravings; but, catering for younger children than the rest of...

The cover of This Way Delight should entice any child

to open it immediately. Sir Herbert. Read has selected those poems which are particularly appropriate for children since they ignore adult experiences while never appearing...

and cowherd to `Bas Celik,' the long tale of „ rho , and dragons, and should appeal to all ages. d e s is a harshness about the ancient Welsh star t ore which makes Legends of...

these legends and this version , published as a Puffin Book, is easy on the rea der With the one black exception quoted, all these books are well illustrated, most notably thc...

in. Birds of prey pounce on monkeys gambolling in jungle

T HIS book* is enthralling for one reason which I do

not think any reviewer will deny. It sustains the narrative of one of the most compli- cated and fantastic political episodes in English history over 350 pages with a lucidity...

We once saw a cartoon of a row of robots

making a row of robots, and the owner of the factory was saying to his friend "I wonder where it will all end!" We are quite ready to admit that we are not averse to some forms...

The Story of the Oxford and Cambridge Far East Expedition TIM SLESSOR —Sunday Times. 62 photographs 2IS. Cyprus A Portrait and an Appreciation SIR HARRY LUIZE The author...

FOR BOYS AND GIRLS By Kate Seredy Phi lomena "Charming."—News Chronicle. "It has the placid simplicity of the peasant folk among whom Philomena grows up, and the dancing...