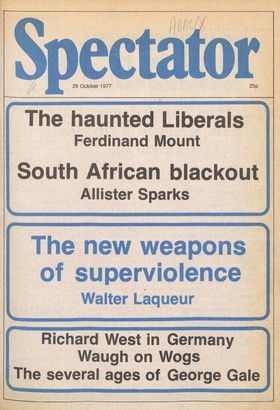 The Chancellor of the Exchequer continues to tinker with the economy rather than to tailor it. His latest mini-budget is round about his eleventh, depending on how you count...

Preambulations Ferdinand Mount If you wish to succeed in politics, one of the techniques you must master is the Misleading Preamble. This is the little phrase with which you...

David Owen was surprisingly civil to me at a diplomatic reception at the Spanish Embassy, in spite of the very rude criticisms I have made of his handling of the Rhodesian...

Bathroom whispers Auberon Waugh Perhaps it is' asking too much that the Queen should submit to a public whipping by the Maharishi, although her illustrious . predecessor Henry...

Fear and trembling in South Africa

Allister Sparks Johannesburg Even for a country . so inured to arbitrary police action, some 700 people currently in detention without trial and 150 more silenced under banning...

Peter Nichols Rome There was once a play in which Gertrude Lawrence, looking as glamorous as only she could, made her entry from the garden with the husky announcement: 'I am...

Victory of the liberal Left

Richard West Bonn The Lufthansa hijacking and the murder of the industrialist, Schleyer, have had an effect on West Germany which is immediately obvious to the Gastarbeiter...

Nicholas von Hoffman Washington Mr Carter has hit his first nadir. All Presidents have nadirs, some as often as once every six months, others quite rarely. It's the result of...

The future of terrorism

Walter Laqueur There is at present a world-wide inclination to exaggerate the political importance of terrorism — connected, no doubt, with its sensational character. Nor is it...

George Gale Last Saturday, at around four o'clock in the morning, (so my mother assured me), I became fifty. I was asleep in my bed at the time and was unconscious of anything...

LADY CLARKE OF TILLYPRONIE'S COOKERS ., BOOK; almost any1hing by or about John Oliver Hobbes. Recording of Constant Lambert 's ballet suite The Prospect Before Us. Write...

The threat to insurance Roy Assersohn The thrifty have had to accustom themselves to watching their savings being eroded by inflation and taxation. They may soon have to...

The meaning of love

Sir: Leo Abse (22 October) has misunderstood Christian teaching about love when he asserts that 'not all men are worthy of love, and it is an affectation to claim that they...

Sir: If Christopher Booker wishes to use Jungian terms, he should try to use them Correctly. In his review of John Fowles's two b ooks (15 October) he claims that the shadow'...

Sir: As one who began a student career many years ago in forestry, it saddens me to have to answer Mr Troup's letter (8 October) relating to the Forest of Dean. I know and...

Sir: You warn of the danger of electing a Labour government to a further term of office (leading article, 15 October) but in order to carry conviction your warning should be...

Sir: Like Jeffrey Bernard (15 October) I too have been forcibly put through the divorce wringer and could easily top his horror stories by some of my own. When I contested the...

Sir: With regard to my recent review of Ian Hamilton Finlay's exhibition at the Serpentine Gallery I should like to apologise for two errors of fact which he has kindly brought...

Sir: Thank you for printing Dr Conor Cruise O'Brien's address to the BritishIrish Association (1 October). It made fascinating reading, though it must have been tiring to listen...

Sir: 'Sempre libera. . .in Act 2' of La Traviata! Mr Reichardt (Letters, 22 October) must do better than that before taking me to task. Robert Skidelsky 18 Abinger Road, London W4

Sir: I am planning a book the sub-title of which will be 'An investigation into royalty as an industry'. It will be about people, world-wide, who have gained fame, fortune, or...

Sir: Rather than take up an inordinate amount of your space by replying to Auberon Waugh's thoughtful and helpful letter, I will state my position, regarding the Arts Council,...

Sir: I am working on a book on the British Disarmament Movement, a section of which is concerned• with the subsequent activities of CND and Committee of 100 supporters. I would...

Less than the truth

Sir: I am compiling a collection of Excuses, sub-titled Lies,Evasions & Deceits, to be published by Blond and Briggs. Any suggestions would be most gratefully received,...

The two who made it

Sir: Mr Pendlebury in his letter of 15 October has fallen into a common error. Besides Caleb and Joshua, Aaron's son Eleazar at least also entered the Promised Land, see Joshua...

Sir: Last week I received at first the Spectator. Your student-seller told me it was a magazine for opticians and if it was not that what I expected, I could return that...

Simon Blow Mary Curzon Nigel Nicolson (Weidenfeld and Nicolson E5.95) One of the ironies of this age that strives for equality is its fascination for its opposite and...

Angela Huth The Women We Wanted to Look Like Brigid Keenan (Macmillan £7.95) The Changing World of Fashion Ernestine Carter (Weidenfeld and Nicolson £8.50) There is undying...

Patrick Cosgrave I had better start this with a warning to writers of crime fiction, and particularly to two of my favourite women. I am getting very fed up with the crime...

Kay Dick (Men Lane £2.95; Penguin Books 70p) Science fiction, if it has any value, dedicates itself to the renovation of fictiop; those who read it desperately want to leave the...

Benny Green Slx Men Alistair Cooke (Bodley Head £4.95) The first duty to perform is to reassure the suspicious: only three of the six portraits have appeared in print before,...

Regards to Broadway Daniel Halstead New York The new theatre season is upon us here, heralded by that annual festival of press agentry and furor where the bright outlook for...

High hokum Rodney Milnes Exhumation, restoration and rediscovery were, as ever, the watchwords of the invaluable Wexford Festival. This (the twentyseventh) year's novelty was...

On display John McEwen 'We're all too sophisticated, that's the trouble,' said the female guide at the Museum of Modern Art, New York, as she wearily went through her paces in...

Walden Mitty Richard Ingrams A recent profile of Brian Walden in the Spectator revealed a number of interesting facts. Having known and liked the former member for Ladywood...

Jungle fare Marika Hanbury Tenison I have just come back from two months in the jungles of Borneo, cooking for the twenty-five scientists at Long Pala on the Melinau River,...

Con-men Jeffrey Bernard I don't as a rule follow court cases. Other people's murders, robberies and frauds don't excite me, but I must admit that adultery and its bedfellows...