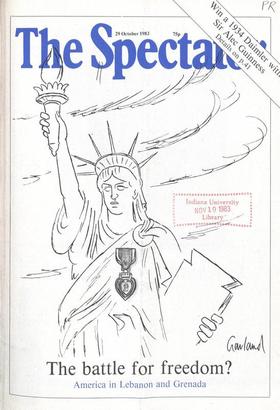 T he American invasion of Grenada reveals the irrelevance of international law, and the dangers inherent in a foreign policy conducted in terms of the defence of liberty and...

Making her ridiculous Charles Moore A comprehensive schoolboy might prefer to be deliberately graceless. A public school boy would affect ease. Mr Kinnock looks like a grammar...

I don't suppose many people read last week's article by Geoffrey Robertson and myself about the future of Reuters news agency, because it was long and dealt with some rather...

The 1 per cent fallacy Auberon Waugh perhaps I am premature in detecting a slight shift in the attitude of polite England towards its handsome and charm- ing new Leader of the...

Charles Glass T aps. Most Americans, until this week, had not heard the bugler blow taps since the last soldiers were brought home in body bags from Vietnam. It is an eery...

Peter Gill H ow is it then that the British and the Italians have escaped unscathed? Even before last weekend, the casualty figures told a story — 16 French dead, seven US...

Max Hastings suppose that we should long ago have grown out of being surprised by the spec- tacle of black mischief, or at least black farce, on Caribbean islands from which...

A day to remember

Christopher Hitchens Washington nonald Farrell Young Jr, is by no means a pretty sight. At the age of 17, standing trial for murder, he doesn't seem to care much about the...

It must have been a mule

Roy Kerridge -Flown in Cleveland, Tennessee, at the L./Church of God convention, preacher after Southern preacher shouted, sang, prayed and prophesied. By the time my stay in...

The Spectator is offering a special student rate for a 38 week subscription — to cover three academic terms and two short vacs. — for only £10.95 — giving students a saving of...

One hundred years ago Mr James Lowther is our favourite

Tory speaker. He made a speech at Coventry, yesterday week, which ought to be reprinted and distributed by the Liberal Associations all over the coun- try. In it, Mr Lowther...

Richard West T he Editor and several readers of the Spectator have remarked on the ever- increasing number of streets, parks, junior common rooms, bars and racehorses nam- ed...

Timothy Garton Ash T he Peace Movement, having swept across western Europe from Sicily to Greenham Common, having brought millions on to the streets of our capital cities,...

Making sense of mergers Jock Bruce-Gardyne A couple of months back in these columns I suggested that a lowly parliamentary Under-Secretary might be facing the toughest...

Grammar schools Sir: In your leading article (2 October) you argue for the reintroduction of grammar schools in Solihull. In theory this is fine, but in practice Solihull's...

Sir: It may interest you to know that here at Exeter University one of the lounges in our main Students' Union Building, Devonshire House, has been called the 'Nelson Mandela...

Sir: I have been commissioned by The Bodley Head to write, with his agreement, the biography of the 9th Duke of Portland, who, as Mr V. F. W. Cavendish-Bentinck, was Chairman of...

Who is my relation?

Sir: I notice that relations of Dame Edna and her entourage and relations of Spectator employees are ineligible for your competition. Could you specify the exact degree of...

Sir: Lord Bruce-Gardyne (22 October) scoffs at Margaret Drummond (Times, 15 October). Is he, perhaps, less aware of the inflationary experience of the self-employed with their...

Colin Welch 'V very reader of the Spectator knows with what vitality, sense, wit and knowledge Paul Johnson fills a column. Amazing about his History of the Modern World...

Alastair Forbes Marie Bonaparte: A Life Celia Bertin (Quartet £14.95) Unburdening himself, a dozen or so Li years ago, to the editor of Punch, the chap he had picked as good...

Brian Masters Oscar Browning Ian Anstruther (John Murray £12.50) t is brave of Ian Anstruther to write a biography of an interesting man in whom nobody much is interested. One...

John Jolliffe Writers in Russia 1917-1978 Max Hayward Edited with an introduction by Patricia Blake (Harvill Press £7.95) Doris Pasternak wrote in 1944 that 'a 1J/translation...

Opera bouffe Peter Ackroyd La Traviata ('U', Odeon Haymarket) I t looked as if we might be getting Verdi la/fresco, as Franco Zeffirelli's adaptation of La Traviata opened...

Out of touch Giles Gordon Maydays (RSC: Barbican) The Custom of the Country (RSC: The Pit) The Cherry Orchard (Haymarket) T here's a scene in David Edgar's ambitious,...

Sylvia's farewell Richard Ingrams 4 -no you really want to see Russell Harty twice a week? How keen are you to see more plays about hospitals, heart transplants, senility,...

Going West Taki New York O ne of the reasons I abandoned my old friend Jeffrey Bernard in hospital and fled back to New York was that his ward was full. I didn't trust myself...

Owls and satyrs P. J. Kavanagh I n the Times Literary Supplement of 14 October James Fenton has published 'God, A Poem', which contains, among others, these stanzas: Oh he...

Last resort Jeffrey Bernard W e were idly wondering what on earth Watneys will do to the French pub When Gaston Barlemont retires. Piped ac- cordion muzak a. la Maigret?...

Jaspistos reports: Competitors were asked for a Bellocian verse tale about a Lord Lundy who had some other failing than cry- ing too easily. I spent the weekend at a house...

No. 1293: Way off St James's Set by Jaspistos: There are rumours that there is to be a Groucho Club in London, named after the Marx Brother who said that he would refuse to...

Tall oaks Raymond Keene J am delighted to announce that the British Chess Federation, supported by sponsors who as yet prefer to remain anonymous, has made a bid of around...

A prize of ten pounds will be awarded for the first correct solution opened on 14 November. Entries to: Crossword 631, The Spectator, 56 Doughty Street, London WC1N 2LL. 1 2...

n the fourth week of the 'cease-fire' 1 in Lebanon the headquarters of the American and French units of the peacekeeping force in Beirut were blown up, killing about 250...

with Dame Edna Everage Hello Possums! This week's Quizmaster happens to be my very favourite Stage-Door Johnnie. Whenever I'm doing one of my all too rare sell-out theatrical...

If you missed the previous week's issue, it is still possible to enter the competition. Back numbers are available from: The Spectator, Competition Back Numbers, 56 Doughty...