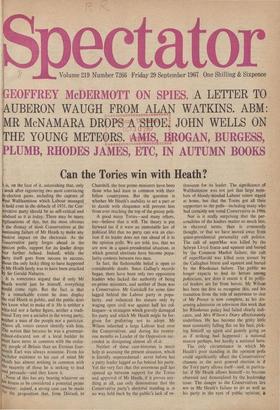 t is, on the face of it, astonishing that, only

week after registering two most convincing y-election gains, including the capture of est Walthamstow which Labour managed hold even in the debacle of 1931, the Con- ative party...

Notwithstanding our obsessive concern with the nature of our relations with the United States there are periods of mutual disen- chantment. Such a phase has coincided with the...

Mr George Brown went to New York to dance the frug and tell the United Nations about Vietnam, Rhodesia and the Middle East. Russia announced publicly that she was stepping up...

CHRISTOPHER HOLLIS 'We do not mind whether they supervise our lunches or what are their methods of dis- cipline. All that we care about is that the eleven-plus should be...

POLITICAL COMMENTARY ALAN WATKINS DEAR BRON, William Boot, you will recall, wrote a column entitled 'Lush places.' I am afraid you will find few of them in your new field as...

NIGERIA RUSSELL HOWE Lagos — The impending arrival of the seven- man peace mission of heads of state nominated by the recent African summit conference in Kinshasa...

AMERICA MURRAY KEMP TON New York—Mr Harry Ashmore is the newest of those persons ranging in eminence downward from the Secretary-General of the United Nations who have...

McNamara drops the other shoe

DEFENCE: ABM LAURENCE MARTIN The possibility of America joining Russia in the anti-ballistic missile business has been so inten- sively debated in the last year or two that Mr...

SPIES GEOFFREY MeDERMOTT Many of my best friends are spies, or spooks as the Americans call them. There are two good reasons for this. My Foreign Office duties for a decade or...

DENIS BROGAN That's the end of an Auld Sang.' Lord Bel- haven's famous comment on the end of the Scottish Estates on the union of the Parlia- ments of Scotland and England in...

THE PRESS DONALD McLACIILAN Believe it or not, there was a time when one man could—or believed he could—edit a national newspaper and the Encyclopaedia Britannica...

TELEVISION STUART HOOD The broadcaster has an absolute duty to keep himself informed about his audience. He must know its likes add dislikes, be aware of its reactions and...

MEDICINE JOHN ROWAN WILSON One of the most encouraging aspects of the Neasden affair has been the balanced and sym- pathetic reaction of the general public. While it is...

J. W. M. THOMPSON As some readers will have noticed from press reports, an unusual discussion is at the moment in progresi between the Periodical Publishers Association (to...

From the 'Spectator'. 28 September 1867—The great event of the week is the arrest of Gari- baldi on Monday at Sinalunga, near Sienna, on his way to the Papal frontier. The...

Reality, where are you?

PERSONAL COLUMN KENNETH ALLSOP In one off-Off-Broadway theatre last summer you could, for half a dollar, goggle at random groups of people herded in to set up a com- munal pad...

SIR ROBERT THOMPSON I was rather left with the impression by this book that the 'mission' of the United States Army, and especially of the Airborne and Special Forces, is to...

DEREK PATMORE The Making of Charles Dickens Christopher Hibbert (Eyre and Spottiswoode 50s) The British are inclined to underestimate their great writers and take their fame...

5.40. The Bay View. After the office, Evans drops in for a quick glass of stout, Then, by the fruit-maohine, runs into Haydn, Who's marrying the kid he's nuts about. Of course,...

ALAN WATKINS Parliament from the Press Gallery T. F. Lindsay (Macmi11an•30s) 'My dear boy, what are they talking about in there?' Mr T. F. Lindsay has often inquired of me,...

DENIS BROGAN The first thing to expect of any guide to Manhattan is that it shall convey the extra- ordinary character of the city, or, to give it its strict legal title, the...

JOHN HORDER Creatures wandering in and out of paradise Lost in this world. This one clutching at drink A palmist A solitary palmist. A card turns up. He glances at it. My...

OPERA CHARLES REID The first of this year's Ring cycles, three- quarters of the way through at this writing, has been worth anybody's money for the Covent Garden orchestra and...

It's that Bergman again AUTS

PENELOPE HOUSTON A few years ago a possibly apocryphal story was going the rounds about Orson Welles, wan- dering casually into the middle of some film festival screening and...

ART BRYAN ROBERTSON There's a good deal on at the moment worth serious, sceptical or glum attention. At the Hanover, the American lady sculptor, Marisol, has presented us with...

JOHN BULL Intending this week to provide some advice about buying and selling ordinary shares so as to beat inflafion and provide a modest income, I find that I must begin by...

NICHOLAS DAVENPORT 'Rolling down to Rio' have gone all my friends of the financial world to attend the annual meetings of the International Monetary Fund and the World Bank. If...

CUSTOS The gilt-edged market suffered a sharp setback this week with the rise in American bill rates (ninety-one-day bills) to 4.63 per cent—the highest since January. The Bank...

CONSUMING INTEREST LESLIE ADRIAN Noting, but not comprehending, my affection for champagne, an admirer once presented me with an elegant swizzle-stick. This was clearly an...

September) that Mr Graham Greene now lives in France and not in England. I don't see how it affects my argument, although Mr Greene is more likely to suffer the horrors of...

Sir: I regret that, due to a mis-hearing on the tele- phone, my article about the Enfield case (22 Sep- tember) states that counsel for the Minister sub- mitted that parents and...

Sir: While the site of New Ash Green was not part of the original, extremely narrow, London green belt, Mr Leslie Bilsby (Letters, 22 September) knows as well as I do that it...

Sir: I was rather hoping that someone else would take issue with you on your article concerning the Tory leadership. I agree, of course, that any talk of a `power struggle'...

Sir: I wonder why Donald McLachlan (22 Sep- tember) clipped 700.000 copies off the Radio Times circulation figure. or was it a printers' error? For the record, Radio Times...

Sir: Your correspondent, Alan Smith (22 Septem- ber) has certainly. hit the nail on the head in rais- ing the 'Condition of the People' issue. If we study the OLC election...

Sir: It is true, as Mr Ashe suggested (Letters, 15

September), that Tories are not unanimous over selectivity, but I believe it is the latter-day means- testers who are introducing a new and controversial note. Since the...

Sir: Heaven forbid that I should re-write Cole Porter, who once wired Frank Sinatra, quite rightly, asking Sinatra why he sang his songs if he didn't like the way they were...