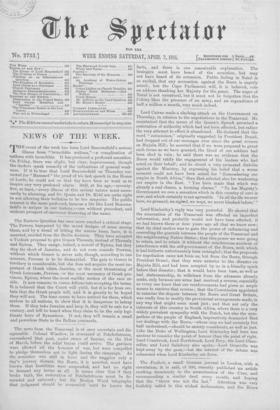 T HE event of the week has been Lord Beaconsfield's serious illness from "bronchitic asthma,"—a complication of asthma with bronchitis. It has produced a profound sensation. 'On...

The Freiheit, a small German journal in London, with a.

circulation, it is said, of 300, recently published an article exulting ferociously in the assassination of the Czar, and recommending a similar deed every month, and hoping...

Lord Cairns made a slashing attack on the Government on

Thursday, in relation to the negotiations in the Transvaal. Ho maintained that the terms of the Queen's Speech promised a restoration of authority which had not been effected,...

Lord Kimberley's reply was very powerful. He showed that the

annexation of the Transvaal was effected on imperfect information, and probably would not have been effected, if we had known three or four years ago all that we know now; that...

"`** The Editors cannot undertake to return Manuscript in any

The Eastern Question has once more reached a critical stage.

The Powers, hampered by the secret designs of some among 'them, and by a dread of letting the waters loose, have, it is asserted, receded from the Berlin decision. They have...

The news from the Transvaal is at once uncertain and

dis- agreeable. Colonel Winslow, in command at Potchefstroom, surrendered that post, under stress of famine, on the 21st of March, before the relief trains could arrive. The...

Mr. Bradlaugh has lost his appeal, the Judges having decided

that the Act of 1869 did not exempt Mr. Bradlaugh from the obligation of taking an oath in the House of Com- mons, as he was not among the class of persons affected by that...

Ayoub Khan, of Herat, is experiencing the usual fate of

des feated Asiatics. The Heratees and Candaharees in his service. consider that he ought to have conquered Candahar, and as he did not, have risen against him, and besieged him...

If the farmers understood Mr. Gladstone's speech of Monday, and

all that it implied, how delighted they would be ! Mr. Harcourt proposed that the burden of the main roads should be lifted off the local rates, and divided between. the county...

The Government of Russia has taken a very short first

stop towards municipal institutions. An Imperial ukase orders the election of a Council for St. Petersburg, whose vote, if confirmed by the Czar, will be final and executive....

Sir William Harcourt on Thursday gave an explanation of his

conduct distinctly based on this plea. After reading the incriminated passages, and denouncing them f‘ bestial and ferocious," he declared that they constituted "a flagrant...

Herr Windthorst, the head of the Ultramontano party in Berlin,

has proposed, in a meeting of all the Gorman.Parlia- rnenta,ry groups, to request Prince Bismarck to induce the Governments of Europe so to alter their laws that any person...

The English Press should not pass over without notice the

death of Nuwab Gholam Hussein Khan, K.C.S.I., perhaps the• very best Mussulman servant the Government ever had. He was a man of pedigree, from the wildest district of the...

Mr. Carbutt made out a strong case on Wednesday for

the closing of public-houses. during the day of an election, but injured the case for his Bill by excepting from its provisions both London—which certainly ought not to be...

Mr. Chamberlain made a mistake on Tuesday in trying to

get the Thames River Bill through as a private Bill. Unquestionably it was a bill which raised important principles, and principles which it was desirable that Parliament should...

On Tuesday, Mr. Ashton Dilke brought forward in the House

of Commons an abstract resolution in favour of the immediate introduction of a decimal system of coinage and decimal weights and measures. In reply, Mr. Chamberlain made a very...

The state of Ireland is in some respects better, though

not by any means all that might be hoped. Lord Justice Fitz- gibbon, at Galway yesterday week, commented on the great increase of crime, as compared with the beginning of last...

The Temperance movement appears to be making a real impression

on the consumption of alcoholic drinks in England. In the Times of Tuesday, Mr. Hoyle has . shown that the con- sumption of beer, wine, and spirits during the year.1880 has...

It is affirmed with very little reserve that should the

French. Government settle its difficulties with the Bey of Tunis by assuming the regency of the State, Great Britain will not be in a position to interfere. When Cyprus was...

On Tuesday also Mr. Leatham brought in his resolution against

the simoniacal evasions of the law of the Church in rela- tion to the purchase and sale of benefices, and illustrated the evils arising from these evasions by the evidence...

THE ILLNESS OF LORD BEACONSFIELD. T HE alarm of Wednesday and Thursday concerning the serious illness of Lord Beaconsfield told the country what, at such times only it ever...

THE POSITION OF GREECE.

T HE " settlement " said to have been accomplished by the, diplomatists in the Greco-Turkish dispute is a most wretched one. According to a multitude of witnesses, who. can...

NIHILISM AS AN INTERNATIONAL QUESTION.

P ROFESSOR MARTENS, Herr Windthorst, and, indeed, almost all who discuss the international treatment of Nihil- ism from their point of view, seem to us to overlook one-half the...

THE KINGDOM OF ROUMANIA.

T HFARE is a disposition to treat the elevation of the Princi- pality of Roumania into a kingdom as an unimportant or evea,stightly absurd. event, bat we question if that view...

LORD CAIRNS AS A STATESMAN.

T ORD CAIRNS'S speech on the Transvaal question is 1 evidently something more than a Transvaal speech ; it is a speech meant to vindicate Lord Cairns's position in the Tory...

T F the Pall Mall's account of the disturbances at Basing- stoke on the last two Sundays can be trusted as accurate, "the Srjvation Army," as it is called, has been very...

N EITHER the resolution which Mr. Leatham moved on Tuesday, nor the speech in which he introduced it, was particularly calculated to further the object he professed to have in...

THE NEW DANGER OF JOURNALISM.

T HE refusal of the Jury in " Lawson v. Labonchere " to find a verdict is, we imagine, in very close accordance with public feeling about the trial. Nobody, except the plaintiff...

gress or State Legislatures iu this country has been, so far as I am aware, overlooked, in the discussion of the recent Rules for the suppression of obstruction in the House of...

FINE ART IN WHITECHAPEL. [To TEE EDITOR OF TUB "

SPEOTAT013.1 Siit,—An experiment in higher education is about to be made in Whitechapel, an account of which may interest your readers and enlist their help. For the Easter...

THE ORNAMENTS RUBRIC IN THE LAW COURTS.

[To THE EDITOR OF THE " SPROTATOR.1 Srn,—I desire now, with your permission, to follow up my letter on the lack of compulsory wording in the present Orna- ments Rubric, with...

[To THE EDITOR OF THE " SPEOTAT011,1 SIR, — Please allow me to cornet a slip in the letter which you were so good as to publish for me last week. I said that in September,...

[TO THE EDITOR OF THE " SPECTATORM Srrt,—Iu the review, the week before last, of Mr. Jennings's " Rambles," your reviewer quotes the passage in which the author says, "The...

AN ACADEMY OF WATER-COLOUR PAINTING. (CAN WE HAVE IT?) IT is now nearly a year since there appeared in our columns an article headed, " Wauted, a Water-colour Society," which...

THE BURSTING OF THE MONSOON. r . PALE was the morn, with deep cloud-masses hung, But ever and anon a fitful ray Of watery sunlight pierced the curtain grey ; And o'er the...

[To THE EDITOR OF THE " SPECTATOR. "] SIR,—You explain " why Whigs do not turn Tories." That great Nestor of Whigdom, the old Marquis of Lansdowne, once told me a story of a...

CANON LIDDON ON CHURCH TROUBLES.{' IT is as impossible for us to sympathise with the drift of Canon Liddon's proposal in the preface to these Sermons for putting an end to the...

[SZOOND NOTIOB.3 Tux hopes with which Bollmann undertook this first expedition for Lafayette's liberation proved utterly vain. He was then confined in the citadel of Magdeburg....

MR. LEFEVRE ON THE LAND QUESTION.* LEFEVRE has done the

public a service in publishing in a collected form several of the essays on questions connected with the land, which have appeared from time to time under his name. The special...

MR. BAYNE'S ESSAYS.* Helve is a good book, with a

somewhat awkward title. Mr. Bayne writes with a freshness and charm which must attract all readers, and with a strength of conviction which compels +respect, when it does not...

H. Moir and Co.) —When we say that Mr. Drewry writes for those readers who insist upon having an intricate and exciting plot, who willingly condone improbability, and who...

subject cannot compare with those which Mr. Gore's predecessors have

handled. The great Pontiff, indeed, who met Attila and turned him from his purpose of attacking Rome, is a striking per- sonage. So is the Bishop who did So much to consolidate...

Sacred Palm Lands ; or, the Journal of a Spring

Tour. By A. G. Weld. (Longmans.)—The authoress of this little volume may be honestly congratulated on having achieved a real success. Her Journal of a Spring Tour carries us...

Bremner ; or, Two Months in the Highlands. By "L. R. L." (S. Tinsley and Co.)—The heroine of these two volumes is a Scotch lassie, possessing the most enthusiastic admiration...

Notes of Travel in Fiji and New Caledonia. By J.

W. Anderson, M.A. (Ellissen and Co.)—There is some entertainment stud, we should say, some profit to be got out of this volume. Mr. Anderson wont, wo take it, to those parts...