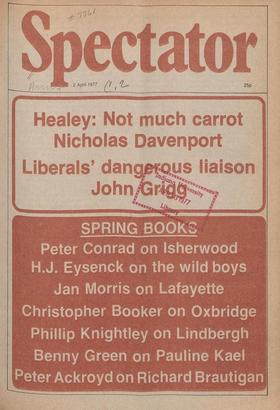 Not much carrot from Healey

Nicholas Davenport There can be nothing so boring as watching a BBC or ITV programme covering the Budget speech. Wiseacre pundits are called upon to comment on snippets of the...

No room for manoeuvre

r rom Mr Healey we have now had ten budgets and Umpteen predictions about what is going to happen to the rate of inflation. Of his latest effort it can at any rate be said that...

Dangerous liaison John Grigg The Lib-Lab deal which kept the Government in office last Wednesday is clearly advantageous to Mr Callaghan, and potentially so to Mrs Thatcher,...

The magazine 'West Africa' says that Major Marien Ngouabi, President of the people's Republic of the Congo, may have been murdered by left-wingers. This strikes me as unfair...

Three Irishmen in a boat

Auberon Waugh One of the oddest results of the Spectator's inquiry into its readers' tastes and aversions was a demand for more political analysis and comment. In my six years...

Nicholas von Hoffman Washington The event that called forth goose pimples and lachrymose attention here was the return of the commission sent to Hanoi to learn whatever there...

Counting the cost in Portugal

John Biggs-Davison One reason why Dr Alvaro Cunhal and his fellow-Stalinists could make a humiliating mess of their revolution without threat to their leadership was that for...

Turks under the bed

Taki Theodoracopulos When I rang my father on a business matter in Athens last week, he was rather rude about the British in general and planespotters in particular. 'A likely...

Peter Nichols Rome The trouble with Europe is that each country making up the Community is in its way lovable and loved, but when they are brought together they become an...

Tony Craig Readers of Mr Bernard Levin's perorations in The Times are unlikely to identify him as an ardent trade unionist. But it is he, above anYone else, who is leading what...

The burden of history

Colin Bell Edinburgh Lord Acton maintained that history provides neither compensation for suffering nor penalties for wrong; but Acton's background was staunchly Catholic, not...

Death of an image

Brian Inglis 'At first sight,' William Barrett wrOte some eighty years ago, 'few subjects appear to be so unworthy of serious notice and so utterly beneath scientific...

Jeffrey Bernard It's a funny old race is the Grand National. Jf I tell you what I really think of it as a betting proposition then something's bound to go wrong, but I will...

Sir: Patrick Cosgrave's article on Jack Jones in last week's (19 March) Spectator was as wrong-headed and spiteful A piece of journalism as I can recollect. I do not recognise...

Sir: Yes, how vulgar of Mr Ferdinand Mount (5 March) to dare to criticise the Provost of King's! Only a common person, out of touch with modern intellectual trends, would...

Sir: A few Labour spokesmen, to their lasting credit, would have preferred the Government to be defeated rather than risk their party being compromised. There must be many more...

YesâScotch Sir: No one has ever objected to the people

Sir: Tony Craig's fascinating article (5 March) on the Greater London Council Labour Party manifesto made me race back to have another look at my copyâparticularly the...

Caroline Lamb Sir: It is absurd of Auberon Waugh (1 9

March) to compare Mrs Trudeau with Caroline Lamb. Caroline Lamb was an artist, if manic-depressive, egotistic and eccentric. '[feel intenselyâis that madness?' she asked. It...

Rebuke Sir: May another American reader attempt to answer Jay

Williams's question (26 February) about Nicholas von Hoffman s 'qualification' to report on American aft fairs? They should be readily apparent.. with a complete...

The trouble with Christopher

Peter Conrad Christopher and his Kind Christopher Isherwood (Eyre Methuen e4.95) Isherwood has only ever had one subject: himself. The political reversals which drove him to...

Tales from the woods

A tale of two towns

Christopher Booker My Cambridge introduced by Ronald Hayman, My Oxford introduced by Ann Thwaite (Robson Books Â£4.75) 'They were good practical little meetings, as I remember,...

Advertisements in the "Books & Records Wanted" column are charged

at a special half-price lineage rate of 30p a line (minimum 2 lines), and orders must be accompanied by a remittance for the full value, Box number : 20p extra.

Patrick Cosgrave Carlos Complex: A Pattern of , v Mance Christopher Dobson and o n a I d Payne (Hodder and Stoughton Â£5.50 ) :I.Cannot deny that waiting for death is a...

Eastern Seaboard sounds Penelope GilHatt New York New York, the city of strange sayings muttered to the air: as though the city's infamous pollution absorbed speech, as though...

More light Rodney Milnes Henze's first opera, Boulevard Solitude (1952) was given at the Theatre Royal , Glasgow, last week in a new production by the Stuttgart Opera. This...

Lost star Clancy Sigal A Star is Born (Warner West End) My idea of hell is having to sit through A Star Is Born (AA certificate) twice. It is a sufferingly bad movie about the...

Unruly choir Ted Whitehead Gimme Shelter (Royal Court) The onset of spring brought with it 1 11 Y usual bout of inter-seasonal influenza, with the result that I missed Julius...

Arrogance Richard Ingrams Readers must forgive me if I return, 800 ker-like, to the affair of the Panorama film about Faraday comprehensive school, b . e cause the rumpus...