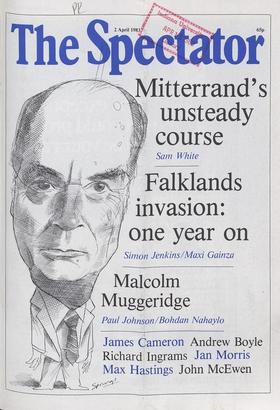 I t was rather ridiculous of Yeats, writing of the occupation by incompetent Fen- ians of the General Post Office in Dublin, to say that 'a terrible beauty' had been born, but...

Massacre of SDP innocent Colin Welch Tt was a joy for all to see Mr Foot after the Darlington by-election restored to that shambling rambling good humour which has for so long...

L efor Mr Jock Bruce-Gardyne is a series of banana skins. Before the last elec- tion he dared point out in print that to reduce public spending was not an abstract e xercise but...

Scoop Auberon Waugh O n Monday, the Daily Mirror's front page announced the start of a series of articles which were WORLD EXCLUSIVE. To those unfamiliar with the ways of...

Sam White W hen it came, the expected split in the French Left did not develop along the r u , ri e of fracture between Socialists and " o Mmunists, but within the Socialist...

Simon Jenkins It is an honour to you to have found A pardoner with his credentials sound Who can absolve you as you ply the spur In any accident that may occur.' (Canterbury...

Maxi Gainza 'The Argentina you speak of no lon g er I exists,' a senior Argentinian diplomat and political hopeful for the forthcoming g eneral elections told me in his ele g...

The death of Mr John Brown, the Queen's personal servant, has created some interest in society. He has for years been a conspicuous figure in the Royal Household, and at one...

Richard West Liverpool Line Street station has a gigantic si g n sayin g: 'Welcome to Liverpool, Home of Britain's No 1 Radio Station'. But of "ling else. The merchant fleets of...

Roy Kerridge O nly once, at a Spectator lunch, have I ever met the redoubtable Taki, author of the deservedly popular 'High life' col- umn. The door opened and in sauntered a...

Bohdan Nahaylo F ifty years ago this week a memorable series of articles appeared in the Man- chester Guardian. At a time when George Bernard Shaw and the Webbs were hailing the...

John McEwen Anthony Blunt has a special significance for the Spectator, since he regularly contributed an art column to its pages bet- ween 1933 and 1938. The chief fascination...

A great scribe Paul Johnson orced to deal with the affairs of TV-am last week, I missed the chance to pay my own small tribute to Malcolm Muggeridge on his 80th birthday, and...

Sir: Malcolm Muggeridge professes to be a Christian, yet his remark about Dame Rebecca West and her husband, reported by Geoffrey Wheatcroft in Notebook (26 March) strikes us...

Sir: Allan Massie (5 March) seems to have an obsession with opinion polls. They are not entirely to be ignored, but they only tell part of the story. In the first place they ask...

Sir: My grandmother always refused to buy hot cross buns. She felt that they demeaned the Christian symbol of the Cross. Perhaps some people may agree with her, as I do....

Off the rails Sir: How sad to see Ian Waller, a sensitive man where railways are concerned, repeating the old canard of the Great Cen- tral as a 'useless railway' (26 March)....

Sir: Simon Courtauld's piece on St James's, P iccadilly (Notebook, 19 March) is misleading: just because the Dunamis itself (based at St James's) concerns with defence and...

Sir: From the item in Simon Courtauld's Notebook (12 March) it would appear some misunderstanding has arisen about the charge for skiing equipment carried on our services as...

Sir: Richard West (19 March) returns to his old favourite idea that Swedish men and women find each other so unattractive that they fly south like the geese to mate — the women...

Legends of Brendan Behan John Stewart Collis w ith the reader's permission I will in- troduce Brendan Behan before mak- ing an assessment of these volumes, which contain 107...

The boyhood of Judas

James Cameron India Britannica Geoffrey Moorhouse (Harvill Press £12.95) G eoffrey Moorhouse, who some time ago in Calcutta wrote the best book for years about that horrible...

Jan Morris The Bones of St Peter: The Fascinating Account of the Search for the Apostle's Body John Evangelist Walsh (Gollancz £7.50) A to whether the bones of St Peter really...

Max Hastings And We Shall Shock Them: The British Army in World War II David Fraser (Hodder £12.95) rr he outstanding fighting force of the 1 Second World War was the German...

John Jolliffe The Easy Way to Tree Recognition John Kilbracken (Kingfisher Books £3.50) w hen the elms in Britain began to die one by one in 1972, local authorities exhorted...

Plus and minus John McEwen Pattern and Design — 1480-1980 (Henry Cole Wing, V&A, till 3 July) A Guide to Early Photographic Processes and Personal Choice (HC Wing, V&A, till...

Which way? Julie Kavanagh Classical ballet, especially neo-classical ballet, can be a cold, undemocratic genre, making a mockery of any dancer Who falls short of its physical...

Singer or song? Rodney Milnes The School for Fathers and Maria Tudor (Camden Festival) nn the occasion of Wolf-Ferrari's cent- enary Hans Keller described him as an...

Literary lives Peter Ackroyd Aspern (PG', Academy Two) T he story may be familiar (a paperback edition of The Aspern Papers is being sold at the box office of the cinema) but...

Penalised Richard Ingrams I t is of course scandalous that with our monopoly or duopoly system of televi- sion the two companies should be allowed to compete with similar...

Too far gone Taki Athens I n a nutshell, Byron said it all, and his words ring truer today than ever: 'For what is left the poet here?/For Greeks a blush — for Greece a tear.'...

Our people P. J. Kavanagh unhappy thing about everybody who puts politics at the centre of their lives is the amount of rancour used as fuel. It seems impossible for a group...

French notes Jeffrey Bernard phis is the fifth week in bed now and I think the brain is going. The legs have certainly gone and so has the libido — mer- ciful release — and I...

No. 1263: Queer trades Set by Jaspistos: The members of Chester- ton's Club of Queer Trades had all invented an entirely new and odd method of earning a living: there were, for...

Jaspistos reports: Competitors were asked for a poem ending with the same words as one of Wordsworth's: 'Oh, The difference to me!' Most of the 'differences' you chose to sing...

A prize of ten pounds will be awarded for the first correct solution opened on 18 April. Entries to: Crossword 601, The Spectator, 56 Doughty Street, London WCIN 2LL. 2 3...

Diagonal death Raymond Keene T his week I round off my coverage of the Commonwealth Championship at Melbourne with the game that shared 'best game' prize and my own most...

SOMERVILLE AND ROSS: any books except 'The Real Charlotte' and 'Adventures of an Irish R. M.'. Ursula Codrington, la Alexander Buildings, Grosvenor, Bath. ANTI-MEMORIES by...