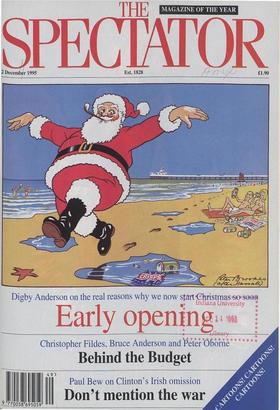 Just say no' I n the Budget, the basic rate of income tax went down 1p to 24p. There was no change on wine or beer duties, but whisky came down by 27p a bottle. Cigarettes went...

Clarke goes for giveaway pre-election Budget; that is next year PETER OBORNE I t was the eve of Mr Major's speech to the Tory party conference at Blackpool. The very senior...

ALEXANDER CHANCELLOR I have an embarrassingly large collection of farewell presents marking my departure from various jobs. There is a fine water- colour by Man Powers of the...

What's wrong with being unhappy? PETRONELLA WYATT A ccording to all those polls taken after the Panorama interview, public sympathy for the Princess of Wales is running at...

CHRISTMAS COMES BUT ONCE A WEEK

Digby Anderson on a Britain in which people just cannot postpone any pleasure: not crisps, not carols CHRISTMAS WAS and still is regarded as a time of feasting. Traditionally,...

KEN THE BOOKIE SHOUTS THE ODDS

Christopher Fildes finds him refreshing, but would not bet on low taxes and high growth at these prices IT IS a good thing that Mr Kenneth Clarke knows how to cut public...

Bruce Anderson on why most Chancellors are condemned to go nowhere fast KENNETH Clarke has always been a paradoxical figure: the mien of John Bull, the views of Jacques...

persist. . . COMPARED with the depravity by which our hospital is surrounded, all other depravity â the licentiousness of Sodom and Gomorrah, the decadence of Weimar Germany,...

THE PRESIDENT DODGES ANOTHER WAR

Paul Bew notes that there is one American link with Ireland which Mr Clinton is not emphasising: the one with the North IN THE spring of 1992, when President Clinton arrived in...

Patrick Bishop drops in at a Serb bar, and finds the regulars somehow untouched by the spirit of reconciliation Sarajevo IN MARCH 1941 crowds of Serbs took to the streets of...

`I AM just a sad old Treklde, really,' said Miss Anita Karr, a 32-year-old stu- dent at Portsmouth University, who is writing a dissertation on the Klingon language. Klingon is...

âMAAM, THIS IS SENATOR JOE McCARTHY'

Simon Courtauld meets a legendary public servant who knew almost everyone, and was asked to run almost everything AMONG THE many accomplishments of Lord Sherfield â as Sir...

Emily Green on those journalists who are obsessed with sickness and death; of newspapers that is IT IS one thing to indulge in morbid fan- tasies about one's own obituary. It...

DIANA: WEAKNESS UP IN ARMS

Simon Sebag-Montefiore says that the Princess of Wales is no Queen Caroline; she resembles someone much more frightening THE PRINCESS of Wales is traditionally compared to...

Theodore Dalrymple gets in now with what he expects will be written in 25 years' time IT IS a quarter of a century to the day since Rosemary West was convicted at Winchester...

AT A mass meeting of Conservatives in London on Wednesday, Mr. Churchill blew the first blast of the trumpet in his party's campaign against what he called `the incompetence and...

FEELING LEFT OUT OF THE PARTY

Simon Hoggart on the MPs who raised a glass at their leader's discomfiture; oddly, they are not Tories THE LABOUR Party may be 30 points ahead in the opinion polls, but morale...

Why Tony Blair should visit the Arcadia of the South Pacific PAUL JOHNSON W here is the best place in the world to be a child? Last week, a New Zealand cabi- net minister, Mr...

LETTERS Europe for ever

Sir: Andrew Gimson (Windsor iiber Alles', 25 November) writes: 'We ought to find it easier to stop worrying whether we are "European" enough, when we rediscover the fact that...

then mentions our royal name-change, Saxe-Coburg-Gotha to Windsor, without recording the Kaiser's reaction: 'I am forced to retaliate. From now on the court theatre will perform...

Sir: Your article 'In the shadow of Nurem- berg' (18 November) reminds us that Goer- ing committed suicide on the day that he was to have been hanged. It was announced at the...

Sir: As much as I appreciated Mr Stamp's argument for a more open approach towards `totalitarian architecture' (Arts, 11 November), I don't think that creating new legends will...

Sir: Theodore Dalrymple (If symptoms per- sist. . . , 25 November) makes the common error of assuming 'immaculate conception' to relate to parthenogenesis. In fact, it refers to...

Sir: I write in defence of Lee Marvin, whom Jeffrey Bernard referred to as a 'shit' in his 11 November column (ironically, the anniversary of the end of the first world war)....

Sir: Peter Oborne asserts that the 'feud' between Robin Cook and Gordon Brown is `on a momentous scale, analogous to the great divide that split Aneurin Bevan and Hugh Gaitskell...

Sir: After reading John Colvin's review of Did Marco Polo Go to China? by Frances Wood (Books, 18 November), I recall a passage from H.G. Wells's A Short History of the World...

Sir: My father was British Consul-General in Nice in 1940. When France fell, he felt it was his duty to drive the Duke of Windsor to Spain lest he should be captured by the...

Sir: Michael Church (`The republic the world forgot', 25 November) is right to sug- gest that there are reasons beyond politics for bringing Northern Cyprus out of the cold, but...

Mary Keen A bout ten years ago, the late Mark Boxer told me that the trouble with gardening books was that they were not visual enough. He prophesied that once they were...

Tom Hiney HARD-BOILED: AN ANTHOLOGY OF AMERICAN CRIME STORIES edited by Jack Adrian and Bill Pronzini OUP, Â£17.99, pp. 532 T he trouble with short crime stories is that as...

A room of one's own

Tobias Jones THE ROAD AHEAD by Bill Gates Viking, Â£17.50, pp. 286 I n the new dawn which Bill Gates describes the sun has no part to play. His `road ahead' has no scenery, and...

Stephen Logan BRUNO BETTELHEIM: THE OTHER SIDE OF MADNESS by Nina Sutton, translated from the French by David Sharp Duckworth, Â£25, pp. 524 I was at first so exasperated with...

Dustmen who think they are brain surgeons

Charles Allen IMMEDIATE ACTION by Andy McNab DC MM Bantam, Â£15.95, pp. 389 A ndy McNab's Immediate Action is an uneasy read. It is no surprise to learn from this...

Montagu Curzon A CHATEAU IN THE DORDOGNE: THE RYMAN FAMILY'S DREAM by Jeremy Josephs Smith Gryphon, Â£15.99, pp. 181 T he chÃ¢teau in question is the ChÃ¢teau de la Jaubertie,...

Not so mad about the boy

Isabel Colegate THE LETTERS OF DOROTHY L. SAYERS, 1899-1936: THE MAKING OF A DETECTIVE NOVELIST edited by Barbara Reynolds Hodder, Â£25, pp.421 B arbara Reynolds wrote a...

Up here we are lifesize. The setting sun Is too. We are all coming in to land. Down there is I. K. Brunel's bridge, as planned, Shrunk back into its model, clean and glowing....

Jennifer Paterson I am glad to see that cook books are get- ting smaller. I have no enormous coffee- table-sized ones before me this year, though some are pretty bulky...

The greatest English journalist of her time

Francis King REBECCA WEST: A SAGA OF THE CENTURY by Carl Rollyson Hodder, Â£20, pp. 442 A s this biography vividly demon- strates, the most important relationship of Rebecca...

Opera Not yet the fourth tenor Michael Scott believes that despite the 'hype' Roberto Alagna has not yet reached the top T he success of the 'Three Tenors' has record...

In Trust for the Nation: Paintings from National Trust Houses (National Gallery till March 10) The great collectors Leslie Geddes-Brown T his exhibition celebrates the...

Some like it hot Ursula Buchan I t is a curious feature of gardeners that we should be so fascinated by plants which grow in a warmer climate than our own. On the domestic...

A Different World â Emigre architects in Britain 1928-1958 (RIBA Heinz Gallery till 20 January) Conflict of culture Alan Powers A few years ago I stood in the ceme- tery in...

Conducting for Christmas Peter Phillips I n case anyone was worried, I'm pleased to be able to reassure you that, since I last contributed to these pages nearly a year ago,...

Once more, the Fab Four Ian Hislop Bliss it was in that dawn to be alive, But to be young was very heaven! W ordsworth was probably not thinking of the Beatles when he wrote...

Travels with my plastercasts Gavin Stamp T he withdrawal of a transport service leaves one bereaved, sad that a particular journey may never again be possible. It has happened...

Winter winners Robin Oakley A bitterly cold Friday at Ascot had its compensations, and its lessons for the future. I doubt if I will find another to fancy more this season for...

Dancing with a stranger Taki L New York ouis Malle, the French film director who died last week at the early age of 63, was once married to the most hauntingly beautiful girl...

Missing out Jeffrey Bernard â¢ I need a face-lift and, until I get one, the only woman who is likely to pleasure me is Martha Argerich. I am not quite sure as to why it took...

Sound logic Andrew Robson A light opening bid and sound logical thinking enabled South to make game and rubber on the following hand; had he not opened, the hand would have...

A MAN renowned for his rudeness in restaurants, I jumped for joy when asked by the editor to add my two-pennyworth on the subject to his pages. What a marvellous opportunity to...

ISLE OF ISLE OF

COMPETITION Oral floral Jaspistos IN COMPETITION NO. 1909 you were invited to provide a poetic dialogue between person and flower, the flower's responses inaudible to the...

Not quite dead Raymond Keene THE NUMEROUS political obituaries which appeared last week for Florencio Campomanes, former president of the World Chess Federation (Fide), have...

A first prize of Â£25 and a bottle of Graham's Late Bottled Vintage 1989 Port for the first correct solution opened on 18 December, with two runners-up prizes of Â£15 (or, for...

Fear is the key Simon Barnes NO, I am not Eric Cantona, nor was meant to be. I am a useful player, one that will do to lay the ball off, make the tackle, cover every blade of...

Dear Mary.. . Q. I am a young female English painter and am having an exhibition of my paintings at the moment in Urbino. As a consequence, from time to time I find myself...