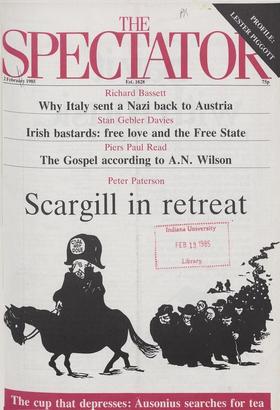 T he cost of borrowing money rose to its highest level, in real terms, for 150 years, interest rates reaching 14 per cent: the pound had fallen yet again to record depths and...

Scargill's last grasp? B y the middle of this week, Mr Scargill was much better off than in the middle of last week. This seems to be the clearest fact about these confusing...

T he affair of Mrs Thatcher's honorary . degree is characteristic of the vanity Which distinguishes Oxford from all other universities. Oxford has for long been too Closely...

Richard West writes: The journalist James Cameron, who died on Saturday, aged 73, was often portrayed as the left- wing victim of right-wing newspaper prop- rietors. It is true...

N ext month the Committee for the Free World will host a grand assemblage under the title 'Beyond 1984: the 1985 London Conference on Communism and Liberal Democracy'. Its...

A lthough, as we reported recently ,., (Notes, 19 January) the London 16 orough of Camden seems unable to clear st iolA' and ice from the streets, it is still able to afford to...

Last Thursday witnessed a unique event in the history of

the Spectator. A reader gave a dinner in its honour, for no other reason than that he enjoyed reading it. Mr Dudley Winterbottom, the man responsible for the recovery of the...

A sense of community Auberon Waugh A s the miners' strike rumbles slowly towards its inevitable collapse, we listen politely to every wiseacre in the kingdom telling us how...

E arlier this year I discovered the secret of mathematics. Up until then it had eluded me, either because I hadn't serious- ly tried to fathom it or because I was thick. In...

Richard Bassett Vienna T t is one of the great achievements of 'post-war Austria that most children of the Eighties grow up with the idea that Beethoven was an Austrian and...

Richard Kershaw O ne was conscious of movement before one could really see anything. Like a moonless farmyard full of the presence of animals, the bush was pitch-black but...

Mr Steele knows better Timothy Garton Ash T his was a week for shattering one's Cold War illusions. The January num- ber of Sanity, 'Voice of CND', has as its cover story 'The...

Stan Gebler Davies Kinsale, Co. Cork p oliticians in a small republic must necessarily be accessible to the public, as Julius Caesar found to his cost. The Population of the...

Peter Paterson N obody, inside the miners' union or at TUC and Labour Party headquarters, had envisaged that the miners' strike would reach the point of collapse quite so...

A tenth Derby? The first of a series of profiles. `G enius' is the word which highbrow priggery might wish to reserve for the fine arts and scholarship. Popular instinct is...

Peter Mullen T he Church of England has recently appointed a study group to consider whether couples are sufficiently 'commit- ted' to the Christian faith to be allowed to...

S ome City nostalgia is still yearning 1,3 away. 'I wish,' says a broker, 'we could get back to the days when the market knew how to move by less than 20 points at a time, in...

T he Stock Exchange has ingeniously suggested that, since the City's new supervisory apparatus will cost a fortune, it should be funded pro raw, with those who give it most work...

No soft option I t was Moreland, in Anthony Powell's Music of Time, who succumbed to a fatal attack of nostalgia. So may we all, starting With the stock market. Here, to lead...

rr he Pink Floyd and the Bank of Eng- land•are a formidable left-and-right for any marksman. To Norton Warburg fell the distinction of losing money for them both. Norton Warburg...

rr he spectacle of Sir Michael Edwardes, embattled at Dunlop, short of stature but never of energy, has reminded a former colleague of his nickname at British Leyland. There, he...

Lord Wolseley has succeeded. He has forced his way to the Nile, and opened direct communication with Khartoum. On the 18th inst., the day after the battle of Abou Klea, Sir...

Down with markets! Jock Bruce-Gardyne T he great thing about fashion is that it usually goes full circle. No one in his right mind throws out a suit just because the cut of...

Sir: I was amused to read Paul Johnson's comments (The press, 19 January) on what newspapers Labour voters read. About 25 years ago I was staying in St Anton in winter for the...

Sir: I scarcely believed my eyes when I read Paul Johnson's comments this week. In a serious nation,' he writes (The press, 26 January), `Scargill would long since have been...

Sir: It was crass of Nicholas Coleridge to ridicule Sydney Schanberg (Diary, 19 January) and thereby his colleagues who also reported the war in Cambodia. Unlike the American...

Sir: Your reviewer of Albanian Assign- ment, Timothy Garton Ash (Books, 26 January), professes not to know how to operate a magnetic fly button in a tight spot. One cut it off,...

Sir: Elizabeth Jennings is wrong in her assertion that By the Fisheries is Jeremy Reed's first book. I am proud that my Menard Press published in 1982-83 one of his several...

Sir: Why does the date at the bottom of your 'One hundred years ago' column in the 19 January issue read 17 January 1985? I know that a week is a long time in politics, but...

Yobbish tendencies Sir: I don't think that Mr Kavanagh's explanation of the hard-line attitude of Young middle-class people to workers (Postscript, 19 January) is the correct...

Sir: From some who undig Digby. Here is a recipe for The Master: Shrunken Head (Cooking time three days). Boil the head for 24 hours, to reduce the swelling. Set aside to cool,...

out The jury is Colin Welch W olfe on Art: Pablo who . . .?' — a headline from the Evening Stan- dard. Tom Wolfe had told an occasionally rebellious New York audience of...

The man of balance George Walden Helmut Schmidt Jonathan Can (Weidenfeld £12.95) O n a visit to the German Chancellery in Bonn, I remember once admiring the collection of...

How not to smash a saint

Eric Christiansen Thomas More Richard Marius (Dent £16.95) This year we celebrate the 450th 1 anniversary of the execution of Sir Thomas More. The Papists made him a saint 50...

Piers Paul Read How Can We Know? A. N. Wilson (Hamish Hamilton £6.95) Tt is hazardous to write about one's 'religious convictions because the soul's experience so often seems...

The first one mused: 'Funny things, memories. My brother bowed over his aeroplanes. I crept out. But I'd left a blood-splash On the shavings. I'd been hewing the brass Off a...

Brian Martin Home Before Dark: A Personal Memoir of John Cheever by his Daughter Susan Cheever (Weidenfeld & Nicolson £10.95) I n 1968 John Cheever complained that his fellow...

When we first touched And, to use a word That sounds old fashioned now, kissed Morning was music, night Love In A Mist. Now with glaucous eyes we glower Resentful and...

Geoffrey Wheatcroft The Crawford Papers: The Journals of David Lindsay, twenty-seventh Earl of Crawford and tenth Earl of Balcarres 1871-1940 during the years 1892 to 1940...

Old demon Rodney Milnes Tristan and IsoIde (Coliseum) N ot that wretched Wagner again', my poor mother once said as the 78s of the Dutchman overture plopped down the sPindle...

Old charmer Richard Shone Chagall (The Royal Academy until 31 March) w hat does bodybuilder Schwarzeneg- ger do with his earnings and spare time? According to a Standard...

Black mischief Peter Ackroyd 'T his has been a highly successful film I one of the few comedies which have earned almost as much as the great science fiction and adventure...

Baffling chaos • Christopher Edwards The Power of the Dog (Hampstead Theatre) T his is • an ambitious, dense, and ulti- mately frustrating new play from Ho- ward Barker which...

Entertainment Alexander Chancellor T elevision is entertainment or it is no- thing. The televising of the House of Lords was therefore nothing. The first live broadcast of a...

His and Hers Noel Malcolm A news items caught my eye last week, and I have been pondering it ever since. It was announced that the GLC is going to spend £600,000 on setting up...

Drink up Alice Thomas Ellis S omeone has given me an interesting book about women and alcoholism. Thank you, darling. We answered the questionnaire which it contains and my...

Stunt man Jeffrey Bernard H ere we are back in bed again, this time with some broken ribs that precipi- tated a lung infection. And they wonder why I don't turn up for lunch...

Whither the Times? P. J. Kavanagh I n a television programme on the Times newspaper I heard its proprietor, Rupert Murdoch, use the world 'elite', or 'elitist, With contempt....

Charles Seaton reports: Competitors were invited to fill a gap in a passage from a thriller. In entries beginning 'I turned the handle . . .' and ending '. . . The head came...

No. 1357: Could try harder Set by Jaspistos: One day, who knows, children will write reports for the local authorities on the progress and behaviour of their parents during the...

Legal moves Raymond Keene T he Legal and General National Club Championships are now in full swing. The second round has been completed and the most successful teams are...

THE SPECTATOR for twelve months and receive free LOURDES A MODERN PILGRIMAGE PATRICK MARNHAM Open to non-subscribers or to those who want to take out a gift subscription....

M ay I be permitted to take a break from wine