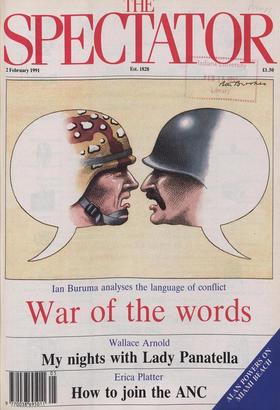 M r Alan Clark, the Minister for Defence Procurement, in one of his first public comments on the Gulf war, accused countries of the European Community of having 'run for the...

The loud voices and still, small minds of the Labour Left NOEL MALCOLM C lement Attlee once told his party, in a moment of frustration: 'Conscience is a still, small voice,...

A producer in Hollywood called last month to tell me that my mildly scandalous memoir, Liar's Poker, would soon be made into a film. I was both delighted and uneasy. On the one...

A night at the opera under the shadow of Hattersley and Kaufman AUBERON WAUGH M ade exuberant by the accuracy of my predictions about the Gulf war, and flush with money from...

WHAT ARE WE FIGHTING FOR?

Ian Buruma analyses the language of conflict and the appeals to religion on both sides IT IS hard to imagine what was going through the minds of the American foot- ball fans...

A MOST REWARDING WAR

In Syria it is no longer permissible to criticise America, reports Charles Glass Damascus THE GOVERNMENT here invited 43 writers to the offices of the Political Secur- ity...

WE regret to record that Mr Bradlaugh died yesterday at 6.30 a.m. His religious views were to us dangerous delusions, and some of his social views were morally detestable; but...

Charles Clover on Saddam's environmental crimes and the danger to the dugong WE ARE all environmentalists now. Yet, as someone who earns his living by writing about the...

Erica Platter tries as hard as'she can to join the ANC Shakas Rock, Natal DINNER (fiery Thai) is over in a glossy house in Morningside, palmiest of the suburbs high on the hill...

to be educated when applying for a marriage annulment AT A SMALL state primary school in Richmond, in south-west London, on the face of it unpromising territory for spectre-...

MEANWHILE, BACK AT THE PARTY

Simon Heffer on the hidden conflict in the Conservative Party PART of the good taste required when discussing politics in time of war is not mentioning the gains the...

GETTING PAST THE DEVIL'S ADVOCATE

Dominic Crossley-Holland meets the men who want to make saints of Newman and others 'WE'RE waiting for a sign from heaven,' Father Gregory Winterton said, 'and I've every...

persist . . . AS La Rochefoucauld so perceptively remarked, we are all strong enough to bear the troubles of others. Indeed, some of us make a speciality of this kind of...

Berd on the wing

JACQUES Attali's Berd is on the wing again. The new European Bank for Recon- struction and Development (Banque Euro- pdene in its acronym) is to perch in London, but declined to...

THE idea of white-collar recession is no more than dimly recognised, but we need to adjust to it, because it is here, and will plainly get worse, and will have unfamiliar...

Pain in the asset

SOMEONE else with headquarters on the brain is Sir Richard Attenborough. He is chairman of Channel 4, which is feeling the pinch of recession in advertising and pas- sing it,...

I LEARN that Norman Lamont, following my recommendation and John Major's good example, has put his Budget forward to 10 March so as not to clash with the Champion Hurdle. This...

White-collar recession comes to cast a blight on Roseland CHRISTOPHER FILDES W anted: a Cabinet minister with a showmanlike disposition and a bowler hat. He can then be sent...

Sir: As one with a scanty knowledge of the United States and its citizens, based on no more than four visits and a number of personal friendships, I write to echo Vicki Woods's...

Sir: In the matter of observing rocket warfare, John Simpson CA different kind of war', 26 January) had a distinguished predecessor almost exactly 200 years ago. In Fuller's...

Sir: Recent profiles of Saddam Hussein suggest that his unpleasant behaviour was caused by abuse he suffered as a child. Might we not kill two birds with one stone by...

Sir: However one views the rights or wrongs of the Gulf war, it should be remembered that the United States and Soviet Union, together with many other nations, provided Saddam...

Sir: The author of your leading article (`Bombs beofore BR', 26 January), no doubt clad in a claret and consommé- stained suit, seems completely unaware that many local...

Sir: What a remarkable armchair strategist is Auberon Waugh (Another voice, 19 January). Almost everything he has writ- ten in his article, 'Unlikely to be quite such a field...

Sir: Having been commissioned to write the first biography of Sacheverell Sitwell with the agreement of the Sitwell family, I am anxious to trace letters by, or memories of,...

Sir: Digby Anderson (Food, 26 January) is very wide of the mark when he estimates that the 'lower and middle classes' eat two and a half oysters each per year. In fact even...

Sir: I am distressed that Paul Johnson thinks that. I have been abusing him (The press, 12 January). Ex-editors of the New Statesman should stick together, for we may be an...

Sir: Last month I donated to the library of the local grammar school in Rye some 40-50 books (not a paperback to be seen), the residue of my late brother's collection. I still...

Sir: May I comment on the book review on Loopy by Sidney Vines (19 January). His remarks do justice neither to himself nor, more importantly, to Loopy Kennard. Those of us who...

Sir: When I read Amanda Craig's article on termination of pregnancy (Poor woman . . . poor potential human', 5 January) I was surprised when I compared it to the cover drawing....

So excellent a king Eric Christiansen THE REIGN OF EDWARD III by W.M. Ormrod E dward III was in some ways the perfect English king. He beat the Scots and the French very...

Round and round the trampled ground between the flaming maple and the black walnut, and out across the nickel rink to the winter warming-hut, round, round with bounds and yells,...

For pilgrims and tourists

Emma Tennant CHURCHES IN RETIREMENT: A GAZETTEER edited by Michael Charlesworth, with a foreword by J. L. Carr HMSO, f9.95, pp. 162 I n 1941 Hans Dieter von Hassall was a...

The raw material of the romance

Geoffrey Wheatcroft NECESSARY SECRETS: THE JOURNALS OF ELIZABETH SMART edited by Alice van Wart Grafton, £14.99, pp. 305 S ome writers are condemned to be remembered by one...

Dazzled by the sun

Philip Mansel LOUIS XIV by Francois Bluche Blackwell, f30, pp.624 A ll good biographers fall in love with their subject', believes the translator of this biography of Louis...

The stripping of Aunt Puss

On the dangerous edge of things

John Henshall BIZARRE BEHAVIOURS: BOUNDARIES OF PSYCHIATRIC DISORDER by Herschel Prins Routledge, £25, f9.99, pp.111 'For years I have been increasingly convinced that many...

To Whom It Pertains

`To create, to God alone pertains.' Sir John Davies, Immortal Soul. `Stop creating!' is said to a tiresome child who's half-hysterical with tiredness from survival tactics,...

Where the wild things were

Goodbye to the Suits

Saying goodbye to the suits wasn't easy So handsome they'd hung on his absence beside her With spotted silk handkerchief fluffed to a soufflé And sleeves tapered down to the...

Raymond Carr W hy do people write and go on writing novels? Dr Johnson would have said for money or praise. Nicholas Mosley, who has just won the Whitbread Prize for his...

Architecture Deco fever S een through the mesh of a panama hat, the Miami noonday sun refracts into a spectrum of bright pastel colours — pale green, light purple and lemon...

Gus Cummins (Gardner Centre, University of Sussex, till 9 February) Unknown forces Giles Auty A number of artists I respect, John Bellany and Mick Rooney among them, urged me...

The Grifters (`18', Warner West End) Tricks of the trade Mark Amory A Martin Scorsese production of a Stephen Frears film, say the credits, but the important name is Jim...

Sixties fall-out Martyn Harris W hen the Sixties exploded in our faces the fragments were picked up by some oddly contrasting people. The surly, rent-a-mob tradition became...

Off to war Taki New York When Nigel Dempster rang the Palace hotel in Gstaad and cheekily asked to be put through to Mrs Saddam Hussein's suite, the Palace operator connected...

In last week's 'Sale-rooms' column it was wrongly stated that the Polly Peck sale to be held by Phillips on 19 Febru- ary had already taken place. Our apolo- gies to readers and...

My nights at the opera Jeffrey Bernard I t was with a mixture of amusement and irritation that I received the news that Taki had written in the Sunday Express that I was...

Delayed reaction Zenga Longmore Remember the night, seven years ago, when it was so foggy that all the planes had been cancelled? Well, that was the night. The next day, I was...

WHEN Riva opened last July, such was the whooping hysteria

that welcomed it that I thought it prudent to wait for a while before issuing my report. Let The Spectator avoid the vulgarity of the new, I thought, and anyway, better to see...

Alcoholimericks Jaspistos RE 12 YEAR OLD SCOTCH WHISKY I n Competition No. 1661 yop were in- vited to write limericks in which the last word of the first or last line is the...

Nerves Raymond Keene T he first game in the world cham- pionship qualifier between Nigel Short and Jon Speelman was played in the board- room of Watson, Farley and Williams in...

A recent musical, called Freudiana and launched in Vienna, is reported to be a vulgar travesty of the great man's life and work. There will, no doubt, be other similar musicals...

I CAME across this the other day in Keith Douglas's war memoir of nearly 50 years ago, Alamein to Zem Zem. He was recall- ing the delivery in the western desert in 1942 of...