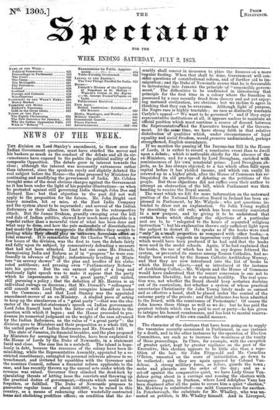 THE division on Lord Stanley's amendment, to' throw over the Indian Government question, must have startled 'the Mover and his backers as much as the conduct of the debate and...

The character of the elections that have been going on

to supply the vacancies recently occasioned in Parliament, in one instance by a death, and in the other instances by the operation of Election Committees, are such as to...

The impression that the Turkish difficulty will be peaceably overcome

gains strength, although the evidence of recent facts rather inclines the other way. Turkey . remains firm, and does not relax either in her bearing or her military...

Tux Queen and Prince Albert visited the Camp on Thursday ; but the rain prevented the troops from completing their evolutions, and obliged the Royal visitors to take shelter in...

We resume our memoranda of the events at Chobbam Camp with the review of Saturday. Prince Albert had arrived on Friday, and it was thought that a night surprise was intended....

The Law Amendment Society closed its sittings for the season with a dinner at Greenwich, on Wednesday last; Lord Brougham, its President, in the chair. The first business toast...

At Stroud, on Tuesday, Mr. Herman enjoyed an unopposed election; Mr. Merewether Turner having withdrawn, and no other candidate coming forward. One of the chief points in Mr....

FRANCE. — Paris still occupies itself with the East, and news is but scanty. On Thursday the Emperor reviewed the troops at Satory in the presence of the Empress and the Duke...

Five candidates were nominated, on Monday, for the two vacancies in the representation of the county of Clare,—the late Members, Sir John Fitzgerald and Mr. Cornelius O'Brien,...

The Earl of Dalkeith was elected on Saturday, without opposition, as Member of Parliament for the county of Edinburgh. He explained the phrase used in his address, "large and...

The death of Dr. Faussett, Margaret Professor of Divinity at the Uni- versity of Oxford, leaves not only the Professorship vacant but a Canonry of Christchurch. The election,...

The despatches of the overland mail from India, China, and

Australia arrived this morning. The latest dates are Calcutta, 16th May ; Hong- kong , 6th May ; Melbourne, 6th April. The news from•Burmah is of the slightest ; but some...

Mr. Forbes Mackenzie yesterday issued his farewell address to the

electors of Liverpool. No Liberal candidate has yet come forward ; but Sir Henry Bulwer's name is freely mentioned. The Tory candidates are three in number,—Mr. Liddell, Mr....

The Washington arrived at Southampton yesterday, from New York. The

dates are to the 18th June. It is reported that a Negro conspiracy to burn New Orleans, as a signal for a general insurrection, had been dis- covered at that city ; but the...

STOCK EXCHANGE. FRIDAY AFTERNOON. The operations in Government Securities this week have been affected with the same feeling of uncertainty which in connexion with the Turkish...

We have advices to the 17th May from the Cape

of Good Hope, by the Melbourne, which reached Plymouth yesterday. At Cape Town the reception of the constitution, with the Duke of Newcastle's gratifying despatch, continued to...

A passing statement by Mr. James Wilson, last week, was

reported in terms to which we gave a wrong construction. The repeal of the Soap-duty will not be "put off till next year." The arrangement in question referred only to the...

The Magdalena arrived at Southampton yesterday, from the West Indies.

The crew have suffered severely from the yellow fever. Out of 18 cases 16 proved fatal; one of the victims being a passenger, and another Lieutenant Soriven , R.N., the...

SATURDAY. Positive news arrived this morning from St. Petersburg respecting the intentions of the Emperor. It appears that on the 24th instant the courier arrived, bearing the...

At the Adelphi, the Camp at Chobbam has been very

pleasantly treated in a farce bearing that title - the author, Mr. Mark Lemon, owing his success partly to his own sm art dialogue, partly to the excellence of his actors, and...

been definitively withdrawn. We regret this very sincerely, because the

composer is a man of distinguished merit ; but, reviewing the impressions made upon us during the performance, we feel convinced that there could have been no other result, and...

When Mademoiselle Rachel, on Wednesday evening, bade farewell to the London public as Camille in Les Boraces, we felt that she was doing her utmost to leave a favourable...

The rival Philharmonic Societies have had concerts this week ; the 014 1 on Monday, the New on Wednesday. Both were excellent, and both were as successful as possible : on...

111 • , ME little Prince who has just been admitted within the pale of the Church of England is the eighth of those royal pledges which have been given, not only that the...

The Palais Royal, which has remained shut for some time, during -which its artists played at the Salle Ventadour, was reopened on Saturday in a complete state of renovation. MM....

THE NEW GOVERNOR FOR JAMAICA.

Mn. HENRY BAMELY, formerly Member of Parliament for Leo- minster, and recently Governor of British Guiana, has been ap- pointed Governor-General of Jamaica; and the critical...

GOLD IN THE GREAT GLOBE.

Gold nuggets are becoming one of the sights of the day ; so, being in the neighbourhood, we accepted Mr. Wyld's invitation and stepped into the Australian curiosity compartment...

Once more the scene has shifted at the Panorama in Leicester Square, and Nineveh makes way fqr a picture of the city of Mexico. The first thing that strikes the eye is the...

THE very mention of such a thing as " disfranchising Liver- pool" is enough to show the utter absurdity of any course of action which could consistently lead up to such a...

WHY THE INDIAN OPPOSITION FAILS.

FEW propositions have been debated to so little purpose as that of the India Government Bill. Not for want of information, or of intelligence, or of honesty in the speakeis ;...

Tire Times is right in saying that the question of public competi- tion for public appointments is of great and universal importance, and by no means to be limited to the Indian...

Tux phEenomenon of table-turning has at last received its pro- bable solution, and the denouement is duly moralized. Some weeks back, the turning was ascribed to " unconscious...

FORSYTH'S HISTORY OF THE CAPTIVITY OF NAPOLEON A T ST. HELENA. * OPINION has greatly changed since it was among the articles of the Whig-Liberal creed that the Duke of...

THE TWO THINGS NEEDED'', FOR INDIA. Madras, May 1853. Sm—By the last two mails, which arrived nearly together, we Indian exiles have received intelligence of the great and...

THE late St. George Tucker died in 1851, in his eighty-first year : he had long been an East Indian Director, and been personally associated with India and its affairs for more...

WATSON'S CRUISE IN THE 2BGEA.N..

This volume contains something more than a cruise in the 2Egean. In addition to a steam-voyage from Constantinople to Sicily, Mr. Watson ascended Mount Etna, and visited several...

Boons. Life of Benjamin Robert Hayden, Historical Painter, from his Auto- biography and Journals. Edited and compiled by Tom Taylor, of the Inner Temple, Esq. In three...

BRITISH INSTITUTION: EXHIBITION OF OLD MASTERS. We resume our notice of the works at which we only glanced in a general way when the present exhibition opened. The small Sandra...

MILITARY GAZETTE, WAR-OFFICE, June 18.—Her Majesty has been graciously pleased

to command that her Majesty's 33d Regiment of Foot shall henceforth bear the name of " The 33d (or the Duke of Wellington's) Regiment," which honourable distinction will be in-...