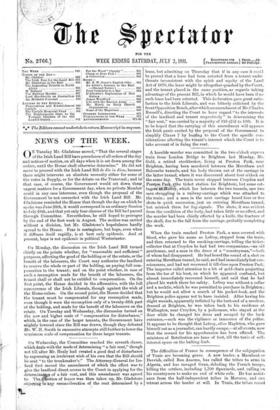 On Wednesday, the Committee reached the seventh clause, which deals

with the mode of determining " a fair rent," though not till after Mr. Healy had created a good deal of disturbance by expressing an irrelevant wish of his own that the Bill...

On Monday, the discussion on the Irish Land Bill turned

chiefly on the points whether, for "reasonable and sufficient" purposes, affecting the good of the holding or of the estate, or the benefit of the labourers, the Court may...

O N Tuesday Mr. Gladstone moved, " That the several stages of the Irish Land Bill have precedence of all orders of the day and notices of motion, on all days when it is set down...

When the train reached Preston Park, a man covered with

blood, who gave his name as Lefroy, stepped from the train, and then returned to the smoking-carriage, telling the ticket- collector that at Croydon he had had two...

A horrible murder was committed in the two o'clock express

train from London Bridge to Brighton last Monday, Mr. Gold, a retired stockbroker, living at Preston Park, near Brighton, having been murdered between the Merstham and Balcombe...

The difficulties of France in consequence of the subjugation of

Tunis are becoming grave. A new leader, a Marabout or Dervish, called Bon Amema, has called the tribes to arms in Algeria, and has ravaged Oran, deluding the French troops,...

One by one, the statesmen of the old Orleanist regime,

which,. though it is now despised, produced some of the greatest men of France, are passing away. M. Dufanre died on Mon- day, at the age of eighty-three, and was followed to...

The trial of the Pashas and others accused of the

murder of Abdul Aziz began on Monday, in a great tent outside the Yildiz Kiosk, before a tribunal composed of threeMussulman and two Christian Judges. A wrestler named Mustapha,...

Lord Coleridge on Monday sentenced Herr Most, the editor of

the Freiheit, to sixteen months' imprisonment with hard labour, for his articles inciting to assassination. The sentence is de- nounced as severe, and it is severe; but if the...

There seems to be an opinion that Europe will interfere

to save the Pashas' lives, but that is doubtful. The great Courts are too bitter against the assassins of Kings, a fact upon which the Sultan, no doubt, relies. It is possible...

The vacancy in the Ministerial ranks left by Mr. Grant

Duff's= departure is, it is rumoured, to be filled by the Hon. Evelyn Ashley, now Under-Secretary to the Board of Trade, a man of wide experience, great vigour, and some...

The new Emperor of Russia, it is said, is determined

to mark in every way that he is a Russian, and not a man " vitiated by the worn-out ideas of the West." He orders that peasant deputations should be introduced first, has...

The somewhat unusual delay in filling the Governorship of Madras

has ended, and Mr. Grant Duff has accepted the ap- pointment. As it had been decided to continue the practice of sending a Governor from England, the selection is an unexcep-...

The result of the elections in Bulgaria is not yet

known, but it is stated that the majority for the Prince is " only too com- plete." The violence of his opponents, therefore, increases, and he is accused of having terrorised...

Mr. Gladstone has written a letter to the Chairman of

the Sugar Operatives' Committee, in which he insists that the ques- tion as to the decline iu the demand for labour caused by the foreign bounties on sugar, is not whether there...

On Thursday, the Duke of Albany (Prince Leopold) opened University

College, Nottingham, with all the grace and even more than the terseness which used to mark his father's addresses on subjects of this kind. "You will not, I hope, be tempted,"...

The Rev. Mr. Green, of the Portland-Street Synagogue, de- fends

the Russian Jews against the charge of being usurers, in a letter remarkable for its tone. He admits that the Russian Jews keep the spirit shops, but says they never get drunk ;...

The Home Secretary, Sir W. Harcourt, made a speech at

the first annual festival of the Metropolitan and City Police Orphanage, held at Strawberry Hill last Saturday, in which he referred to the prejudice felt against the Detective...

The jubilee of King's College, London, was celebrated yester- day

week by a meeting, at which the extension of its original plan of operations to women was publicly inaugurated, and both Lord Salisbury and Lord Carnarvon dilated on the special...

The Lord Mayor on Saturday gave a banquet at the

The annual meeting of "The Society for the Protection of

Animals Liable to Vivisection " was held at the private house of the Lord Chief Justice, last Saturday, Lord Shaftesbury in the chair, and was addressed by Lord Shaftesbury,...

MR. CHILDERS. M R. CHILDERS is, perhaps, the most efficient and skilful of our administrative statesmen,—those statesmen we mean, who concern themselves less in trying to mould...

THE IRISH FEAR FOR THE LAND BILL.

W E trust that the debate of Thursday will have removed the fear which seems to have taken possession of the tenant-farmers of Ireland, that the Government are so bent on...

MR. GLADSTONE IN THE EAST.

W E wish everybody who is accustomed to talk about the Eastern Question, and the conduct of her Majesty's Government in Turkey, would read carefully the debate raised on Friday...

THE IMPENDING TROUBLE IN NORTH AFRICA.

I T is quite possible-we cannot as yet affirm it, but the evidence accumulates—that a movement is about to occur in North Africa of more than political importance, a movement...

T HE Murder of Mr. Gold in the afternoon express to Brighton, though a very ruffianly affair, is a murder quite without mystery, and apparently also quite without skill, though...

T HAT Lord Sherbrooke, called on at the Lord Mayor's Literary Dinner to return thanks for Journalists, should belittle journalism, is only consistent. He owes his elevation to...

"W HAT a terrible reaction there will be, when everyone is tired of this !" Such was the exclamation which could not fail to rise to the lips of the most kindly observer of the...

PROSECUTIONS AND ESTABLISHMENT. (TO THE EDITOR OF THE " SPECTATOR.") SIR,—The Archbishop of Canterbury has recently warned all who desire to maintain the Establishment that...

[To THE EDITOR OF THE "SPECTATOR.1 have only to say, in reply to " A. W.," that the wonder- fully vivid description of Coleridge's conversation in Carlyle's ' Life of Sterling "...

[TO THE EDITOR OF THE "SPECTATOR."] SIR,—I do not wish to enter into the controversy which has been carried on in your columns respecting the Carlyle Memorial, but I should be...

CHEAP OR DEAR FISH? [To THE EDITOR OF THE "SPECTATOR."]

SIR,—Your salmon discussion has only just caught my eye. If the reward for the production of an indenture containing the limitation as to salmon dinners for apprentices had been...

FOR THE WORD " CHARITY."

[To THE EDITOR OF THE ..SPECTATOR.1 SIR,—B.1 reply to Dr. Plumptre, the reason I object to the Revisers for allowing no word but "love" to translate c4yciTrn, is because all...

THE EMPLOYMENT OPEN TO THE YOUNGER CHILDREN OF THE OLD

LANDED GENTRY. [TO THE EDITOR OF THE " SPEOTATOR."1 SIR, — Is there not some reason to believe that domestic service as well as trade was considered sufficiently respectable,...

ENGLISH ODES.* AN accomplished critic expressed his regret recently that we had no selection of English Odes, and now Mr. Gosse has en- deavoured to supply the deficiency. His...

(To THE EDITOR OF THE " SPECTATOR.") Sia,—In the concluding notice of the Academy, the critic says, " We mast begin with the mention of Mr. Luke Fildes' picture of The Queen's...

AN ARTIST'S JOURNEY IN THE EAST.*

(SECOND NOTICE.] IT is a shock to learn that, compared with almost any other great Oriental city, Baghdad is mean ; that its streets are .crooked, uneven, and unpaved, deep in...

FOUR CROTCHETS TO A BAR.* Tins is as excellent a

specimen of the better kind of trashy novel,. the novel which is not written for all time but to amuse a passing hour, as we could find. There is no elaborate character-drawing,...

WE recently noticed the Island Life of Mr. Wallace, as a speci- men of wide and important speculation, founded on a large amount of carefully-observed and collected, though...

THE author begins with a letter to Professor Seeley, to say that the book before us is,— " The only answer I can give to a request you once made me that I should write an...

LIFE WITH THE RUSSIAN ARMY.* LIEUTENANT GREENE has already an

established position as a writer on the Eastern Question. His elaborate work, The Russian, Army and its Campaigns in Turkey in 1877-78, is, and will long remain, the standard...

MR. HATCH ON EARLY CHURCH ORGANISATION.* AFTER the admirable and

scholarly excursus of the present Bishop of Durham on the Christian Ministry appended to his .commentary on the Epistle to the Philippians, he would be either a supremely bold...

Ma. FROUDE, in the Nineteenth Century, swells the " Remin- iscences," by an account of Carlyle's early days, enriched with letters from his mother and his friends, especially...

" We have sung for long in the low-walled garden,

We have flitted among the ivy-leaves ; And oh! we know that some hearts will pardon The tiny sins of such tuneful thieves. We have flown and hopped, to settle and flutter Near...

Woollam should not "glean." Gleaned corn is poor stuff, at the best. Let him sow and reap, if it may be. This will take more time, but the result will be more satisfactory. We...

—The Skies and Weather Forecasts of Aratus. Translated, with Notes,

by E. Poste, M.A. (Macmillan.)—The two things, perhaps, that most readers know about Aratus, are that Cicero translated and that Virgil imitated him. Mr. Poste, who employs a...

—The Conquest, and Other Poems. By Thomas Carlos Wilkinson. (Hunt

and Co.)—We cannot quite make out whether "The Conquest" is by Mr. Wilkinson or by his father, to whose memory it is dedicated. Whoever the author, the poem may be easily...

..--Anne Evans : Poems and Music. With Memorial Preface. By

Anne Thackeray Ritchie. (C. Began Paul.)—It will not be surpris- ing if Mrs. Ritchie's preface finds more readers than the poems of her friend. Yet these have much merit, the...

Companion to the Revised Version of the New Testament. By

Alex. Roberts, D.D. (Cassell, Petter, Galpin, and Co.)—Dr. Roberts, one of the " New Testament Company," gives here some introduc- tory information which may enable the "...

Rugby—Tennessee. By Thomas Hughes. (Macmillan and Co.)— To readers of

the Spectator, it will be sufficient to say that they have here reprinted, with additions, the letters which appeared in this journal describing the new settlement in Tennessee....

The Parson's Sons. By One of Them. (Alter Brown.)—This is

a curious book, of which it is difficult to discern the purpose, unless it be to confirm a popular belief that the sons of parsons are often matevais sujets. Of his brother, the...