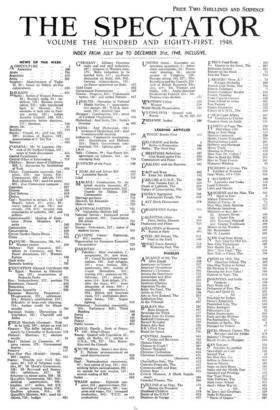 Lessons from the Docks

The many lessons taught by the sixteen days' strike at the London Docks have cost millions of pounds in wasted shipping and lost trade. It is imperative that the lessons...

J ULY 5th, 1948, will be a notable date in British social history, marking as it does the entry into operation of the National Health Service and the National Insurance Acts....

The last British troops have now left Palestine, a month before the date originally proposed for final evacuation. It can safely be said that during the past four years they...

General Smuts, evidently refreshed in mind and body by his visit to England, has lost no time in rallying his technically defeated party—technically, because though it gained a...

Until the privilege is taken from them by force the Finns will continue to organise their political life in the fashion which they prefer—parliamentary democracy on the Western...

There is little in the Economic Co-operation Agreement between the British and American Governments to justify the loose talk, current in various quarters before its...

The Tories and the Land

The Conservative Party's Agricultural Charter will strike most people connected with the land as a very sensible document. It is true that a number of important factors—such as...

The Children Bill had been so fully considered and discussed on non-party lines in the House of Lords and in Standing Com- mittee in the House of Commons that few changes were...

T HE remark in this column last week, that the remainder of Parlia- mentary business will be mainly tidying up, requires qualifica- tion. The truth is rather that we have...

R USSIA, it may safely be assumed, had no wish to find herself engaged, as she is engaged, on two fronts at once ; the military metaphor is inevitable, but fortunately it need...

The journalistic description of Lady Grant, M.P., who has just

become engaged to Lord Tweedsmuir, as " the most photogenic member of the House of Commons " sent me forthwith to the Oxford Dictionary—not that I doubted what the writer meant...

N OTHING more instructive on present conditions in Russia has appeared for some time than the three articles by Alexander Werth published in the Manchester Guardian in the past...

"Now that politics and diplomacy have failed him, Hall is

going to try prayer," I read regarding one of the British husbands of Soviet wives. Quite so. Be practical before you are prayerful JMtus.

The virtual certainty of a change of occupant at the

White Housd next January raises the important question of how extensive the consequential changes are likely to be. The so-called " spoils- system "—under which all kinds of...

The British Medical Association's recommendation to the Home Secretary that

newspaper reports of inquests in suicide cases should be severely restricted, as reports of divorce cases are, is not likely to get much further, and in my opinion should not....

There is hardly a man, if there is a man

at all, whose departure from the House of Commons will be more genuinely regretted than George Buchanan's. He came there as a red-haired Clydeside rebel twenty-six years ago, he...

Party courtesies are not so frequent that they should go

un- recorded. When General Smuts agreed to come to England to be installed as Vice-Chancellor of Cambridge, it was naturally arranged that he would travel by a South African...

By EDWARD P. MONTGOMERY But the very selection of Thomas E. Dewey as the Republican Party's Presidential candidate removes one of the chief means of persuasion of the two...

By I). R. GILLIE Frenchmen feel they have travelled a long way, but yet are as far as ever from their goals—whether these goals be financial, economic, internal-political or...

By RAWLE KNOX F OR ten years or so before 1945 to be an Irish manufacturer was one of the jolliest existences in the world. Coddled in the 'thirties by a protective tariff and...

THE PROBLEM OF BERLIN

By ROBERT POWELL T HE latest Russian move in Berlin represents no new departure. Even during the first month after the Western Powers had gone in, Germans were saying that the...

By J. P. W. MALLAL1EU, M.P. Lord's, Tuesday. E ARLY this afternoon, under watery skies, an England cricket team laid itself down to rest unmourned. It had failed to win. That...

By A. C. B. NEATE Port Arthur is today a modern settlement that has sprung up among the ruins of the old convict station around the sheltered and picturesque cove that was once...

By A. V. DAVIS A RISTIDE tossed his policeman's cap on to the hat-rack, lowered himself into the barber's armchair and extended a pair of muscular gaiters. " Taille de cheveux....

By HAROLD NICOLSON W HEN I was a lad I was taught, and I believed, that the English (we made much use in those days of that now discredited word) were morally and physically...

AT Covent Garden on June 25th Massine's latest addition to the symphonic ballet, of which he was the originator, was given with scenery and costumes by Christian Berard. After...

THE CINEMA " Fort Apache." (New Gallery and Tivoli.)—" Cheyenne." (Warner.) THIS week it is heigho for the open road, and you can take your choice of the dusty wastes of...

HE showed me Tyburn, Westbourne, Fleet—their course On maps as accurate as any brook You know in Kent—gave me the feel of fields Before the houses came, and with the force Of...

Sta,—The Director of Public Relations of the National Coal Board must not assume that your readers are quite as green as appears from his letter to you which appeared in The...

SIR, —Sir Stanley Unwin's plea is timely. We pay more and get less for our money. Business expedition suffers from the slowness of the G.P.O.'s restoration of pre-war...

Snt,—In his article on Professor Cole's pamphlet Why Nationalise Steel? which appears in your issue of June 25th, Mr. Taplin points out that Professor Cole has arrived at a...

Stit,—Sir Stanley Unwin writes, I think, of conditions in Hampstead.

In St. John's Wood, much of it little over a mile from Oxford Circus, the service is even worse. In this road many residents do not get their letters until 8.45 a.m., which...

GROUNDNUT ACHIEVEMENT SIR,—Mr. Jellinek's attempt to laugh off his reference to "1950" as "an obvious typing error " just won't do, for it was on this that he based his...

A GREAT success is being reaped by the Council for the Encouragement of Field Studies. Students of all sorts, and all sorts of ages, delight to attend the four centres that are...

A deal of evidence has reached me in answer to a query on the identity of the Lombardy and black poplar. The conclusion seems to be that the two are identical in almost all...

Sia,—Janus is right in his correction of P. S. Pavely, who questions the use of the word " graduand." But, in Scotland, the term is used not only of those about to receive...

Six,—I have just read A. Piney's letter in The Spectator of June 18th and should like to endorse heartily his comments on our blood transfusion service ; they order the matter...

A very local migration has been conspicuous round my house. It is repeated each year. When spring comes the linnets, which have flocked elsewhere, come to the garden in pairs,...

Lately, as often before, accounts have been published of the wholesale destruction of lettuces that had become unsaleable. The consumption of this excellent plant would, I hold,...

I saw recently an odd botanical event about which some superstition hangs. On either side of the approach to the old, old church at Nevern in Pembrokeshire are a number of yews...

SIR, —A thousand apologies if my typewriter and not your linotype machine was responsible for an error in my article, Music in Wales. Whichever the perpetrator, in justice to...

The German Resistance THOUGH it is early yet to assess in any final way the plot against Hitler which culminated in the explosion of July loth, r944, the tendency (it is clear)...

Einstein, His Life and Times. By Philipp Frank. (Jonathan Cape. 16s.) THE lives of outstanding scientists are rarely of public interest, but Einstein provides a notable...

The Mediaeval Foundations of England. By G. 0. Sayles. (Methuen. 18s.) PROFESSOR SAYLES is a tireless student of the law and institutions of mediaeval England, especially in...

DIVISIONAL esprit de corps was a product of the first world war. Until 1914 the regiment had monopolised the British soldier's loyalty, for armies till then had never been large...

Early Man : A Survey of Human Origins. By Alan Houghton Brodrick. (Hutchinson. 18s.) THE effort to elucidate the story of man's beginning has always proved enthralling to his...

The Poetry of History. By Emery Neff (New York, Columbia Uni- versity Press ; London, Cumberlege. 20s.) PROFESSOR NEFF'S sub-title for this work is : " The contribution of...

The Concern for Social Justice in the Puritan Revolution. By W. Schenk. (Longmans. 15s.) TWENTY years ago the present reviewer was asked in an examination paper whether the...

Haymarket : Theatre of Perfection. By W. MacQueen Pope. (W. H, Allen. 17s. 6d.) THE Haymarket Theatre was built by John Potter, a carpenter, in 172o. For the next hundred years...

SOLUTION TO CROSSWORD No. 482

[A Book Token for one guinea will be awarded to the sender of the first correct solution of this week's crossword to be opened after noon on Tuesday week 'say 13th. Envelopes...

By CUSTOS THE break-up of the dock strike, accompanied by a slight lifting of the clouds in Berlin, has brought welcome relief to harassed markets. It has served, at least, to...

M. MAUROIS writes a rather diffident preface to his new

book, one directed at possibly critical American readers. But it would be a curmudgeon who would say that his modesty is called for " as he has lots to be modest about." For...

THIS is a serviceable straightforward anthology—with writers in chronological order,

the introduction short and three indexes. Mr. Hayward explains that he is " simply . . . trying to illustrate as fully as limitations of space and personal taste permit, the...