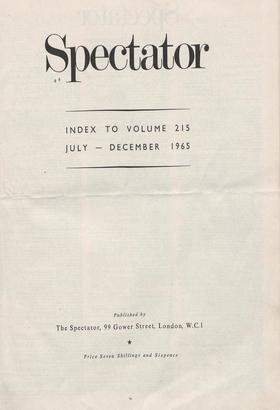 rrHERE is less than meets the eye in Mr. I Wilson's statement about a general elec- tion. Like most of the Prime Minister's utterances, it repays careful analysis and it leaves...

— Portrait of the Week— SEEMED A MOOT POINT on

Saturday whether the Commonwealth was disintegrating or had simply pepped up its bloodstream with a dose of salts. Mr. Wilson was happy to have achieved an ambiguous position on...

Fanfani's Europe OSBERT HASTINGS' writes front Rome: There is many a gaunt . look and black- framed desperate eye within the huge marble halls of the Italian Foreign Ministry...

The Long Haul M R. George Brown is such an attractively ebullient character that he regards any chink of light as a major break-through. It would be churlish to deny to the...

The Commonwealth After the Storms N EARLY a .week later, it all looks very much calmer. Commonwealth conferences arouse tempers, suspicions, cynicism, exaggerated hopes and...

The Handout Version CHRISTOPHER BOOKER writes: There was something considerably more re- markable: journalistically about pages five and eight of this week's Sunday Tgegraph...

Will Mr. Wilson Re-shuffle? By ALAN WATKINS O NE test of Mr. Harold Wilson's con fi dence in himself as Prime Minister will be whether he re-shuffles his Government before...

Where the Liberals Stand

By MARK BONHAM CARTER T IIIRTEEN years of Conservative government are enough for the country as a whole and too much for the Conservative party in particu- lar. When the...

Customers Revolt I see splendid possibilities in the dictum of

Mr. Aubrey Jones and his Board that the in- dustry's customers should not accept the 5 per cent increase suggested by the Road Haulage Association. I see no reason why I should...

The House of Words Sad to see Macm illans, the

Tailpiece Events succeeded non-events so quickly this week that the

daily newspapers had some diffi- culty in keeping abreast of them. A splendidly optimistic story by Patrick Keatley in the Guardian on Monday, headed 'Premier has talks with...

Let's Go With Aaron On Tuesday at Covent Garden (reports

an alert colleague) I overheard a curious remark from one excited critic waving his pencil at another— incidentally the entire audience, both voyeurs and opera-lovers, who...

From MURR AY KEMPTON NEW YORK N EW York has six openly-confessing candi- dates for Mayor, one more than the number of Republicans who admitted they wanted to run for...

Shuffle I am hurt by the suggestion that I do

not appreciate Mr. Wilson's jokes. On the contrary, I am a connoisseur of them. All five of them. What I have said, and will go on saying until the Prime Minister reforms, or...

Making a Million By ROY HATTERSLEY, MP T HE Model-T,' John D. Rockefeller said of the most successful motor-car of all time, 'will go anywhere except into polite society.'...

One Man One Vote, says Nkrumah, In a burst of good humour, Ought to be the rule in Rhodesia. In Ghana, I've heard tell, They only have one Candidate as well, Which makes...

By GEORGE HUTCHINSON C OINCIDING as it does with news of change among the political publicists of Smith Square, the appearance this week of a book called The Persuasion...

Life at the 'Queen'

Sut.--It would be a pity if the correspondence columns of the Spectator became clogged with ex- changes between Jocelyn Stevens and his ex-editors or contributors. There is...

criticisms of his version of events in the Ministerial Crisis of May 1915 constitute 'a want of judgment deplorable in a historian of high and genuine achievements' would...

SIR.— 1 share the views expressed by Lord Renwick in his article in your issue of June 18, and reinforced by Mr. Airey Neave in his letter last week, about the urgent need for a...

SIR, —Mr. K. C. Harrison's candour and courtesy (Spectator, June 18) are most disarming. Am I being a curmudgeon if I point out that, when you are promoting a great campaign to...

SIR,—I appreciate Professor Rosenthal's sense of the ironies involved in our publishing the works of Carlos Williams in what he calls 'counter-chrono- logical order.' Even so,...

SIR,—Alan Watkins's review of the Fontana/New Left Review book Towards Socialism makes only two substantive criticisms, both of which are based on simple factual errors. 1. He...

Face of the Bard

SIR, —Mr. John Davenport writes off the text of Professor Read's pictorial biography The Days of Dylan Thomas (Weidenfeld and Nicolson, 30s.), but is the young professor...

Bloody, Bold and Resolute REID R ACKING my operatic memories and the critico-historical record, I cannot remember or trace anything to touch Schoenberg's post- humous operatic...

It Works Both Ways . The Killing of Sister George. (Duke of York's.) --Lionel and Clarissa. (Yvonne Arnaud Theatre, Guildford.)—Ride a Cock Horse. (Piccadilly.) MPATHY is a...

Sir Hugh's Apologia M Y ears are still ringing with a thin, Olympian music; my eyes are haunt a 'vision of very pure, very smooth ball disappearing into the - stratosphere. In...

Byzantium By DAVID KNOWLES My years ago it was no disgrace to know no more of the Eastern Roman Empire than hat it was settled by Constantine in the city hich then took his...

Lost in the Bush t

THE main point of this book is the one fre- quently made about O'Casey, especially in the rather cosy critical climate of Ireland; while O'Casey remained in his own country, he...

The Cuban Revolution and Latin America. By Boris Goldenberg. (Allen and Unwin, 50s.) CASTRO has been out of the news for some time new. It takes something of, an effort to...

The Prevailing Wind: Witness in Indo-China. By Michael Field.'(Methuen, 42s.) THE tumultuous happenings on the mainland of South-East Asia since the end of the Second World War...

The Pattern and the Core •

BY ANTHONY BURGESS IT was always to be suspected that Rose 'Macaulay would join the select group of authors who, in a pattern of alternating attrac- tion and revulsion, would...

The Light and the Dark WE all know the stock clown of romantic tragedy, --an innocent provoking laughter while he hides a breaking heart. Hans Schnier, the hero of Herr...

a et Why the City is 'Mad' By NICHOLAS DAVENPORT' A I write, silence falls temporarily on 'the longest, most challenging, most contro- versial Finance Bill for over a half a...

By LOTHBURY I r is a year since Quickmix Concrete became a public company when it was hived off by Hayeshaw by a rights issue at 25s. to its shareholders for a fifth of the...

By CUSTOS 1 AST week I wrote: The Financial Times triindex has not yet penetrated the 1964 low " 32 2.6 but if it does so—and it seems likely— Create a lot of pessimism.' This...

Postman's Knock By LESLIE ADRIAN One day a couple of weeks ago a certain area of London received no mail at all. Anxious citi- zens, some of them expecting money,- others...

By MARY HOLLAND `AN exceptional service for the exceptional man' reads the slogan on the Madison Avenue-type stand of the American Fathers of the Holy Paraclete, whose sales...

By ALAN BRIEN As our MPs groan and gripe about the rigours of Ihe.thought of having to go up to the owners ;AV establishment and say. 'Well, I guess I'd Vr.toddle along to...