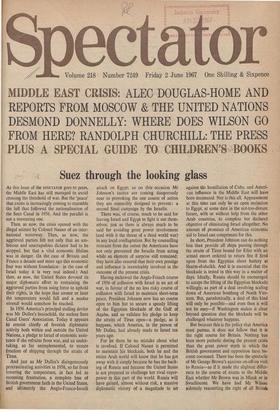 Suez through the looking glass

As this issue of the SPECTATOR goes to press, the Middle East has still managed to avoid crossing the threshold of war. But the 'peace' that exists is increasingly coming to...

Speed is the essence

MIDDLE EAST CRISIS-1 SIR ALEC DOUGLAS-HOME, MP The United Nations was created by people who had been convinced by the sickening horrors of two world wars that the only hope for...

Portrait of the week Sir Francis Chichester made land in

Plymouth, only to find he was sharing the headlines with crisis, disaster and several imminent wars. In Nigeria, the Eastern region seceded and the army prepared to crush the...

As Russia sees it

MIDDLE EAST CRISIS-2 DEV MURARKA Moscow—History rarely repeats itself but may be such a rare event is about to take place. This is what worries the Russians most about the...

CHRISTOPHER HOLLIS Mr Peter Ward, tenant of the Old Vicarage, Grantchester, has been requested by the Rural District Council of Chesterton and the Postal Workers' Union to...

Where does Mr Wilson go from here?

POLITICAL COMMENTARY DESMOND DONNELLY, MP `What should they know of England who only England know?' Every traveller comes back with the sharp perspective on our own affairs...

Chichester on the cheap

THE PRESS RANDOLPH S. CHURCHILL Apart from Sir Francis Chichester, who de- serves credit for the superbly audacious enter- prise which culminated in triumph in Plymouth on...

From the 'Spectator,' 1 June, 1867—The franchise section of the Reform Bill, both as regards the borough and county qualification, passed finally through Committee on Tuesday......

J. W. M. THOMPSON Lord Snow's decision to attend the Soviet Writers' Congress, almost alone among literary men of any reputation outside the Soviet Union, was a strange one....

TELEVISION STUART HOOD No one would have suspected from the chatty little piece in TV Times that Bill Meilen's play, The Division, had been lying under ban for months, the...

EDUCATION DAVID ROGERS The National Association of Head Teachers has been meeting at Harrogate, but the questioning of educational objectives was absent from their discussions....

PERSONAL COLUMN 11130R SZAMUELX Once every week for the past five months, as regularly as The Forsyte Saga appears on the television screen, I have been steeping myself in...

C. B. COX In 1876 students at Owens College, Manchester, complained that books, money and coats were being stolen from the locker-room. A detective hid himself in the room,...

KEVIN CROSSLEY-HOLLAND I am recovering; the quickening sun, the impatient tendrils seem recoveries. I dream each spring of being one, and, dreaming, heal sufficiently. The...

OSBERT LANCASTER Ecce Homo George Grosz (Methuen 84s) Ever since the first appearance of Ecce Homo in 1923, George Grosz has enjoyed the repu- tation of being the bitterest and...

BRIAN W. ALDERSON children's literature. Apart from providing laziness or indifference. pation by parents' with its demonstration of themselves. children's books. else's...

WILLIAM BUCIIAN The Book of Spies Man Innes (Bancroft 15s) It is a little difficult, at first sight, to determine why such a book as this should have beep turned out in this...

STELLA ROD WAY Midway Anne Barrett (Collins 15s) Are children interested in their own psycho- logical problems? I doubt it very much and I must admit that at first I thought...

MICHAEL POLLARD Ever since Jack London, animal life in the frozen north has been a popular theme for children's fiction of the less suburban sort. Ice King is in the now...

ELIZABETH JENNINGS The Piemakers Helen Cresswell (Faber 15s) To write a novel for children is a large under- taking. Most of the things that are of para- mount importance in a...

Eyes of the law

PETER VANSITTART 'He was called Smith and was twelve years old. Which, in itself, was a marvel; for it seemed as if the smallpox, the consumption, brain-fever, gaol-fever and...

CHARLES REID Last week John Pritchard brought off not so Much a feat of versatility as an act of aesthetic bilb . cation. At Covent Garden he conducted Sir MiChael Tippett's...

BALLET . CLEMENT CRISP Kenneth MacMillan's:latest ballet, Concerto, Was first staged last November for his Berlin company; put on . a 'fortnight ago by Ballet Theater in NeW...

Benediction PENELOPE HOUSTON I haven't read the novel by David Benedictus on which You're a Big Boy Now is based, but presumably it has been through a few mid- Atlantic...

THEATRE At the follies HILARY SPURLING Intrigues and Amours (Theatre Royal, Stratford, East) The Trial. (Theatre on the Balustrade at the Aldwych) . Two comedies this week,...

The nonsense of 'Business as usual' MONEY

NICHOLAS DAVENPORT . The amazing thing is that while the world dithers on the brink of war the open capital markets in the Western democracies still func- tion without fuss....

JOHN BULL When the equity market looks high, as it does at the moment, it pays to think about defensive positions. Computers in stockbrokers' offices churn out all kinds of...

CONSUMING INTEREST LESLIE ADRIAN Where the National Health Service is con- cerned, the London teaching hospitals have a strong affinity with Mussolini's trains. What- ever...

Sir: In Cambridge Granta (April) Dr Goodhart of Gonville and

Caius College writes in an article on abortion that 'the middle-aged mother deserted by her husband and expecting yet another baby should be helped . . . or an undergraduate...

Sir: I am sorry to trouble you again on abortion,

but, in your editorial today (26 May), even you misstate a fact to support a point (inadvertently, I have no doubt). You say that 'there is no question of either the law or...

- Abortion and the law

Sir: May I be permitted to comment briefly on the article 'Down the drain,' by Peter J. Smith (19 May)? It seems generally assumed that British scientists emigrate temporarily...

Sir: Mr Thompson's note (26 May) of British press coverage of President de Gaulle's press con- ference contains a number of inaccuracies. The Times and Guardian reports were not...

Sir: The issue between Mr Smythe and Professor Trevor-Roper (Letters, 19 and 26 May) whether a layman can be made a cathedral dean is easily answered in terms of law, because...

Sir: I make no reply to Mr Watkins's jibes about 'apoplexy' and 'ranting' except to say that they provide a curious commentary on Mr Watkins's standards of conducting...

Sir: Trevenen Peters says we must not brush aside his

arguments as 'hysterical'—but 'hysterical' is, alas, what they are. This is because they rest on the well-worn device of obliterating-all-distinctions. Abortion is likened to...

Sir: Randolph Churchill (26 May) has got some of his facts wrong in the Svetlana case (the sum paid by the Observer, for instance)—and perhaps this isn't surprising in view of...

JOHN WELLS Montreal—`This is normally quite a, how do you say, intellectual programme with the inter- views in the studio, you know, but our actual producer at the moment...

Sir: I really must take issue with one small point in Hilary Spurling's otherwise excellent article (26 May), namely the statement that the new play- wrights whose work has been...

Sir: Before Mr Martin Seymour-Smith calls other people liars, he must get his facts right. In his extensive abuse (26 May) of our book Fifty Works of English Literature We Could...

Sir: How exciting to have a major critical con- tribution in a weekly review. 'Sunset in Bangalore,' by Simon Raven, is something that one will cut out and keep for its deep...

Sit: I would like to congratulate Mr Martin Seymour-Smith on

his scholarly and erudite review of Fifty Works of English Literature We Could Do Without. When a frog tries to assume the stature of a bullock the result is pathetic; but when...