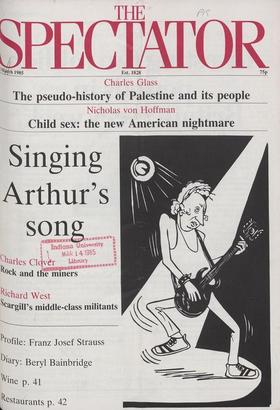 T he miners' delegate conference re- jected with contumely the draft settle- ment of the strike worked out by the TUC and Mr Walker, but the strike nevertheless appeared to be...

Law comes to the unions C onservative Central Office is about to N.,– , bring out one of its little explanatory pamphlets. The pamphlet in question is called 'The facts on the...

T he European Commission has come up with a new initiative which displays all the economy, originality, compassion and wit so characteristic of our Common Agri- cultural Policy....

D ramatic and important events are unfurling in South Africa, but none more fascinating than the paper by Dr Hans Neese of the University of the Western Cape, 'Group without...

Too long the wise Commons have been in debate About money and conscience, these trifles of state While dangerous grievances daily increase, And the subject can't riot in safety...

w ho will guard the guards themselves, or in this instance the telephone tappers? Two methods of preventing them abusing their power to listen to private conservations have been...

On sexual ethics Auberon Waugh S omewhere along the line, Dennis Nilsen seems to have got it all wrong. So, of course, did Peter Sutcliffe, but he was born a Catholic, and I...

R emember me when I am gone away,' wrote someone or other, and only Yesterday, in my own street, one of those blue plaques went up on the front of the house opposite mine. The...

Nicholas von Hoffman T he new population figures show that life expectancy in the United States is longer than ever before, but you'd never know it by what comes out over the...

A true believer Michael White Washington T he really alarming thing about Fleet Street's euphoric account of Mrs Thatcher's latest visit to the promised land is that it is...

Chancellor who never was

Richard Bassett 1 here are some parts of Europe which . regardless of the type of government inflicted on them appear impervious to change. Recent events in Bulgaria have taken...

Rock and the revolution

Charles Clover The miners' strike has taken time to impinge on rock and roll but then popular music has always needed plenty of warning and a good kick up the bum before...

Richard West A s the coal strike drags to a bitter end, Scargill it is fascinating to see where Arthur gets his support, as indicated by this account of a demonstration in...

The case for neutrality

Richard Body T he CND apart, which is primarily a show of moral indignation, there has been little dispute about defence policy for three decades. The accepted wisdom, ack-...

• One hundred years ago

A frightful accident occurred at Shoeburyness on Thursday, involving almost as many deaths among officers as a sharp Egyptian skirmish. An ex- periment with a new sensitive fuse...

Thatcher's monument? Gavin Stamp n the north side of the Euston Road, next to St Pancras Station, lies one of the great monuments of the grandiose, extravagant thinking of the...

Interesting times Jock Bruce-Gardyne W e live in interesting times. As these words were written sterling had just bounced back from $1.05 to $1.10, and the Deutschemark...

Christopher Fildes will resume his colunin next week.

Sir: P. J. Kavanagh (Postscript, 9 Febru- ary) says that 'a case could be made, with difficulty,' for Chesterton's anti-semitism; against that hypothetical case, he reminds us...

Sir: I've been seduced. Alice Thomas Ellis finally got me. If Taki returns, will you please keep her on? You'll soon need someone to prop up the other side of Jef- frey...

Sir: I was deeply shocked to hear (read) that the British Telecom is going to replace all the red-telephone-boxes by new yellow and 'modern' ones ('Save the telephone box,'...

Family planner Sir: I am indeed flattered to earn a mention from my constituent, Colin Welch, in his article "Population" or people?' (Centre-' Piece, 16 February). Alas, he...

Sir: It is true that the libel law in Britain is in need of reform, the cause of much child- ish, petty and vexatious litigation, yet it is possible, while avoiding libel,...

Sir: Why must, or why shouldn't, Auberon Waugh now be abolished? ('Why the House of Lords must be abolished', Another voice, 9 February). Abolition might be rather difficult...

Colin Welch will resume his column in March. The correct

title of the book to ,which he referred on 16 February is 'The First Dance of Freedom', by Martin Mere- dith (Hamish Hamilton, f12.95).

Whose country is it? Charles Glass From Time Immemorial: The Origins of the Arab-Jewish Conflict over Palestine Joan Peters (Michael Joseph £15) Theodor Herzl, the father of...

The best of dilettantes

Hugh Montgomery-Massingberd Our Selves Unknown Lionel Brett (Gollancz £12.95) S ome years BC and BD (that is to say before the resurrection of Miss Joan Collins and her soap...

The number of hours in stock for each of us is tiresomely finite. Stamped and docketed, they grin up at you from the shelves of the cellar where it is too dark to count. How to...

In search of love

A. N. Wilson The Quest for Merlin Nikolai Tolstoy (Hamish Hamilton £12.95) T spent much of my childhood near the snoozy old market town of Carmarthen, in what used to be...

The poor, the poor

Enemy of his own promise

Braggery Alistair Hicks The British Art Show (Mappin Art Gallery, Sheffield, 16 March to 4 May; Southampton Art Gallery, 18 May to 30 June) B ragg n. Supporter of a...

Endurance test Neville Shack E ven Christopher Isherwood would have said goodbye to Berlin far earlier if weather conditions had been as bad as they were during this festival,...

In the heartland Peter Ackroyd Places in the Heart ('PG', Classic Haymarket) rr he setting is Waxahachie, Texas 3 'preserve of the past', as the publi ci material describes...

FINLEY PETER DUNNE: 'Mr Dooley in Peace and War' and 'The Beauties of the Bosphorus' by W. H. Bartlett. Melville A. Robinson, Manorholme, 7 Kenmure Rd., Whitecraigs,...

Consuming Noel Malcolm T hardly ever listen to Medicine Now. IThere are only two things which always make me feel ill: one is being ill, and the other is listening to...

Campaigners Alexander Chancellor T he ex-footballer, George Best, recent- ly discharged from prison after serving a sentence for being drunk and resisting arrest, appeared on...

Open house Alice Thomas Ellis A strange man appeared in the garden Yesterday, mouthing and gesticulating at the dining-room window while someone Was quietly eating his lunch...

Clinical Jeffrey Bernard waiting room. But last week I didn't see anyone I knew and the waiting room was only remarkable for the absence of the face I caught the infection...

Utility P. J. Kavanagh A t some periods of our lives a certain kind of question can become obses- sional. Perhaps it is because of all the talk nowadays of 'service industries'...

Jaspistos reports: Competitors were asked for a lustreless and banal extract from 3 'Middle life' column in this journal. - It's the hardest problem for the humou r ist in the...

No. 1361: Union rules Set by Jaspistos: In Congreve's The Way 0 1 the World, Mirabell and Millamant lay down to each other, alternately, item bY item, the conditions on which...

Wealth of chess Raymond Keene rr he third Novag Commonwealth Chess Championship, hosted by London Docklands, has been a huge success. It was notable for many sharp, fighting...

W hen people talk about combining tradition with innovation, they are usually lying through their teeth and sacri- ficing one to the other — the latter to the former in the case...

a bad start when I went, last week, to one of my favourite restaurants. Cheap, unfashionable (though central) and serving some of the best pre-nouvelle food in London — heavy...