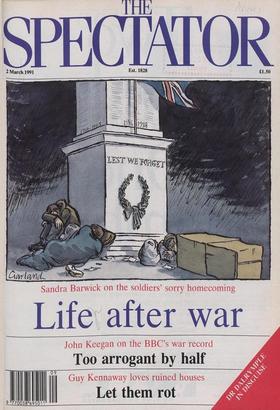 `Now what does one do next . . . ?' L ord Young shrugged off criticism of his conduct over the sale of Rover to British Aerospace when he was Trade and Industry Secretary. Poor...

Mr Major is taken for a ride on a donkey NOEL MALCOLM Although foreign affairs have provided the dominant theme of Mr Major's first one hundred days, there is only one area of...

T he crescendo of adjectives trumpeted by politicians after atrocities — murder- ous, evil, mad — has, in recent times, tended to climax with an adjective which, for some...

Proposals for the removal of a cancer from the body politic AUBERON WAUGH 0 ne of my less usefully spent evenings was recently taken up with travelling down to Brighton for a...

WHEN THE BOYS COME HOME

Sandra Barwick reports on the problems of unemployment and homelessness faced by ex-servicemen AND then what? When they all come home, what happens then? It's Tommy this, an'...

Lord Wolmer is a useful man. He is going to propose a Royal Commission to inquire into fogs, and the possibility of preventing them. It is quite possible, as everybody knows, to...

A PLAGUE ON THE BBC

John Keegan rebukes the television 'opinion-makers' for their contemptible coverage of the war 'I TOLD you so' is not a charitable phrase. In fairness to myself, let me say...

WHAT ABOUT THE KURDS?

David Adamson on the people who are always left out of Middle East peace settlements SARBAST Aram, co-ordinator of the Kurdish Cultural Centre in south London, was considering...

FROM RUSSIA WITH VISAS

Dominic Lawson reveals the hypocrisy at the heart of a dispute with Britain Moscow FATHER Baskagov, the shaggy-bearded leader of an underground sect of the Russian Orthodox...

WHEN COMRADES FALL OUT

The Gulf war is not helping the Soviet-American relationship, Stephen Handelman writes Moscow MANEZH Square is a forbidding expanse of concrete lying just outside the Kremlin...

Anne Applebaum explains why the talk in Yugoslavia is of civil war Ljubljana and Zagreb `LADIES and gentlemen,' a Slovenian legislator pleads for attention. 'I know it seems...

A reader saw this advertisement in the Guardian: Downing College, Cambridge, invites applications from those who teach in secondary schools for Schoolteacher Fellow...

persist . . . TO ADAPT very slightly the words of one of the 20th century's idols with feet of clay, 'Fame at last, fame at last, thank God Almighty, fame at last!' I, who...

LOVE AMONG THE RUINS

Guy Kennaway delights in finding a good ruin before it can be saved THE striking thing about old houses is how new they look. It is a result of the mania for restoration that...

Card school can teach companies how not to wait for their cash CHRISTOPHER FILDES M y card school at Oxford accidentally re-invented the bill of exchange. It could be a...

AN OFFER I can refuse reaches me from Sir James Whitaker, chairman of a new company called London's Third City PLC. This grandly named concern will invest in houses and flats in...

TO SEE where all the cash has gone, look at the evidence now piling up from the High Street banks. The results confirm that 1990 was a year of unprecedented bad debts at home —...

MY SYMPATHY goes to Sir Denys Hen- derson. This week he has suffered the double indignity of publishing dismal fig- ures as chairman of Imperial Chemical Industries and hearing...

TWO classes of big company are naturals for the Jowett treatment. The first General Electric Company is the textbook example — has a huge pile of cash, but did not pile it up by...

Sir: What a whinger Jeremy Putley is (`Life begins at forty, 23 February). I too am both qualified and experienced and have just been made redundant — but I'm 59, not 46 — and...

Sir: As a 45-year-old purchasing executive in my fifth month

of unemployment, I can identify strongly with the frustration ex- pressed by Jeremy Putley. Ageism, however, is not the only form of discrimination which can beset those seek-...

Sir: I think Jeremy Putley's account of his tribulations at

the hands of ageists is very misleading. I too am a professional over 45, and I have been unemployed since Christmas. Yet I haven't found it so tough in the job market. I had...

Sir: Your leading article (`The brainless drain', 23 February) was a risible mixture of propaganda from the Department of Education and Science (the only organisa- tion in the...

Sir: In Noel Malcolm's bleeding hearts column for Lady Thatcher (`Margaret Thatcher: the silent years', 16 February), he might have added that in all her 11 years as Prime...

Sir: In the winter issue of its Bulletin, HM Treasury claims that, 'Legal tender is a specialised legal concept with little practic- al significance for the acceptability of a...

Sir: With all due respect to Noel Malcolm, he is incorrect to state (Margaret Thatch- er: the silent years', 16 February) that apart from the IEDSS there is 'not a single...

Sir: In his review of a book by Zachary Leader (16 February), Peter Levi refers to Robert Louis Stevenson's famous novel as The Weir of Hermiston, thereby giving the impression...

Sir: No commentator upon the war in the Gulf has remarked that it must strike a chord in the heart of John Profumo. As Christopher Booker wrote in The Neophiliacs: July 1961...

Sir: Ian Buruma (`What are we fighting for?' 2 February) was right on target. However, the mention of the word 'kami- kaze' itself also rekindles religious beliefs. Although...

Sir: My wife and I have always thought that it was a bishop of Augsburg called Fugger who died of a surfeit of Est! Est! Est! (Restaurant, 2 February). Down here, wine is...

Sir: In his review of Golo Mann's Re- miniscences and Reflections (Books, 26 January) Piers Paul Read attributes the following quote to Golo Mann: 'They will publish excerpts...

Sir: As one who listened, with increasing annoyance, to the pacifist sermon preached by Father Michael Prior on the Gulf war, I was somewhat bemused by his riposte last week to...

Sir: How I agree with Paul Johnson (The media, 23 February) about the decline in the quality of the voices that go with the images on television (and in the vocal sounds of...

Sir: 'The hard cell' by Taki (9 February) should be no sell at all. The impression he gives is completely out of date. Pentonville today is well advanced in a rebuilding...

A s I profess no Passion for Essays, Spectator's plea that I discuss a mighty volume comprised entirely of those opin- ionated exercises, might well have missed its mark, had...

Nor uncle me no uncle

C.H. Sisson DOG FOX FIELD by Les Murray Carcanet, f6.95, pp. 103 P oetry is a tiresome word. Housman was convinced that most readers, 'when they think they are admiring...

A princess bobbing on the tide of history

Philip Glazebrook ASYA by Michael Ignatieff Chatto & Windus, £13.99, pp. 320 T his enjoyable novel tells the life story of a Russian princess born in 1900 into whose private...

Steering by the stars

Ann Geneva THE CASE FOR ASTROLOGY by John Anthony West Viking Arkana, £20, pp. 500 I t struck me some years ago that astrolo- gy, especially during the early modern era,...

Happiest within the family

Andrew Robinson SUCH A LONG JOURNEY by Rohinton Mistry Faber, £13.99, pp. 339 R ohinton Mistry was born in Bombay, five years after Independence. In 1975 he emigrated to Canada...

A conversion delayed by women

Piers Paul Read ST AUGUSTINE: CONFESSIONS translated with an introduction and notes by Henry Chadwick OUP, f17.50, pp. 340 S t Augustine of Hippo is under attack by some...

Not ticky-tacky, not just the same

Heritage Cabinet responsibility P hotographs can be misleading. They make the Badminton Cabinet look toylike when in fact it is a massive thing, 12 feet and eight inches high....

No connection Gabriele Annan M r and Mrs Bridge is a Forsterian film by the team who made A Room With a View and Maurice: Ismail Merchant, pro- ducer, James Ivory, director,...

Long Day's Journey Into Night (Bristol Old Vic) Sprawling beast Christopher Edwards rom the tranquillity of the study, it is relatively easy to recommend, with a good...

High dive Martin Gayford J azz seems to be booming, and as it booms, so jazz clubs proliferate. As some- one who has spent many of the happiest evenings of his life in such...

The battle of the Alps Taki Gstaad h athat strikes one most on arriving in Gstaad are the refugees from the Gulf war who are holed up here. Good old Helvetia has always been...

Good in bed Martyn Harris I n the long watches of the night, as the parade of generals, defence analysts and professors of Middle Eastern studies becomes unendurably dull, we...

For the love of Laverne Zenga Longmore `Friends all!' he shouted into a mini- megaphone. 'Me want to draw to your attention my wide selection of herbal cure for all ailment...

Blur blur Jeffrey Bernard I have just had to stop the newspapers. I can't read them any more. In fact I can't read anything smaller than the letters on the keys of my...

The Greenhouse � • : A CURIOUS inversion has taken place in culinary circles. People are eating home food out and restaurant food in. Any chef worth his toque pays homage to...

A ter spending nearly three months in his world championship match against Gary Kasparov, Anatoly Karpov might have been expected to take a well-earned rest from chess. Far from...

Gender bend Jaspistos I n Competition No. 1665 you were in- vited to provide two verses from a femi- nine, or feminist, counterpart of Kipling's 'If. This idea, suggested by...

Wendy Cope wrote a poem called 'Cocoa with Kingsley Amis'. You are invited to write a poem celebrating the sharing of a drink with a famous writer, alive or dead — tea with...

KENNY Dalglish was the tenth soccer manager to clear his desk in the two months since new year's day, and the 20th since the beginning of the season. There are 92 clubs in the...