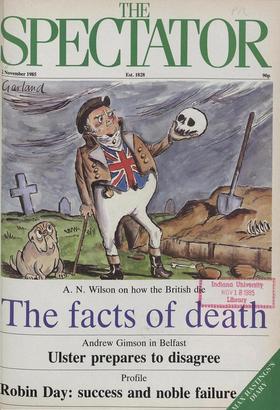 ROMAN Catholic and Anglican theolo- gians, 150 of them, have banded together to declare that apartheid is the Antichrist. The `Kairos document', reported in the Times on Monday,...

THE Times has had some extraordinary editors. But few have been more remark- able than Charles Douglas-Home. His tragic death at the age of 48 after a long illness has left...

ULSTER -SOME SURRENDER? W e were first told to expect an Anglo-Irish agreement in February. Since then, the date has been postponed again and again and now the talk is of...

The triumph of Mr Lawson and the Abnormals FtRDINAND MOUNT I n those entertaining conversations with celebrities, conducted in the better class of newspaper by Mr John...

I have spent the past week on one of those author's promotion tours of America which, some outsiders delude themselves, flatter the ego. In reality, unless you are Jeffrey...

Time for Bophuthatswana to join the Commonwealth AUBERON WAU GH The great American thinker, Bruce Springsteen, has given it as his opinion that it is in reality still part of...

THE FACTS OF DEATH

In modern Britain, dying is almost unmentionable. A. N. Wilson confronts his own terminal illness IT IS not easy to accept that one is suffering from an incurable disease....

As Kadar arrives in Britain, Timothy Garton Ash finds that a little capitalism is a dangerous thing Budapest MRS THATCHER'S popularity may sink in Britain: in Hungary it is...

Andrew Gimson on the Unionists' fear that the British Government will betray them to Dublin Belfast LAST Sunday night a congregation of many hundreds was exorted by its...

Gavin Stamp argues that ordinary spec builders may best solve the Prince of Wales's worries A LITTLE to the north of the Oval lies Courtenay Square, Kennington, a most...

Insiders: a profile of Sir Robin Day, master of the political interview This is the first of an alternating series of profiles of 'Insiders' and 'Outiiders'. EVERYONE who...

The Press: Paul Johnson pays tribute to the courage and judgment of Charles Douglas-Home A NATIONAL newspaper editor, and particularly the editor of the Times, needs two...

M. Pasteur is said to have discovered a cure for hydrophobia in the shape of an inoculation with the marrow of rabbits which have died of the disease. Looking to the report of...

THE TEACHING OF ENGLISH

Competition report by Ferdinand Mount Heads of English in secondary schools were asked to write on how the teaching of English could be improved, in a competition organised by...

The lesson as performance by John W. Cole THERE are no rules. Every novice must learn the craft in his own, individual way. Educational theories help little. They simply...

MARKETS need ways to contain the consequences of failure, and to try to prevent the bad from bringing down the good. The simplest answer is the Stock Exchange's. Its...

FOR your Christmas book list, coming shortly, never a dull page: the report and accounts of Johnson Matthey Bankers. Says one of the authors: 'It'll take a bit of writing.' A...

NEWS from the land of the rising mic- rochip: the Japanese have opened their own financial futures market, did $7,0 00 million of business in the first two hours, and settled...

A nasty case of metal fatigue, and it looks infectious CHRISTOPHER FILDES D ogs and devils! What d'you think? The bottom's fallen out of zinc! Zinc is crumbling, zinc is...

T he first three winners in the nine-week Spectator Game of Consequences will receive outstanding prizes. The first prize is a valuable 18th-century aquatint of India engraved...

Sir: In the course of his most recent review (Books, 26 October) Brian Martin writes: `What sentiments to lift the morale of that presently beleagured (sic) profession' (namely,...

Sir: How delighted I was to read Zenga Longmore's article on the chatting up techniques (26 October). I haven't had such a good laugh for ages. It really took me back to the...

LETTERS In peril on the sea

Sir: Edward Pearce clearly knows nothing about warfare at sea (Letters, 12 October). If his arguments for describing the sinking of the Belgrano as a 'war crime' are accepted,...

Sir, Your delightful but no doubt hard-pressed staff inadvertently caused me to put into the mouth of Lionel de Roth- schild of all people the abominable sugges- tion that...

Sir: Just a line to reassure Valerie Grove (Diary, 31 August) that in India bingo is still called housey-housey, the boot of a car the dickey, and movies talkies. The Regal in...

Sir: Just in case anybody has been misled by Peter Levi's review of the Wildlife on One programme on vampire bats (Televi- sion, 19 October), we did not stake out the donkey as...

Sir: Why is it that few people, even writers, seemingly know the difference between `sucking' and 'suckling'? Reference is made in the review of the Diaries of Auberon Waugh...

Sir: Much though I am in sympathy with the drift of Mr Amis's article (`Sod the public', 19 October), I believe he is seriously — wrong about spelling reform. The present system...

SUBSCRIBE TODAY! I would like to take out a subscription to The Spectator. I enclose my cheque for £ (Equivalent $ US & Eurochenues accepted) RATES: 12 Months 6 Months...

Antony Lambton MIDWAY ON THE WAVES by James Lees-Milne Faber, 170.95 0 n the first page of the first volume of what can loosely be described as Mr Lees-Milne's recollections,...

Getting into strange habitats

Peter Quennell MONGOOSE WATCH: A FAMILY OBSERVED by Anne Rasa John Murray, £10.95 S ince the beginning of the century, there have been many changes in methods of zoological...

A hero in the mountains of India

Philip Glazebrook THE HEART OF A CONTINENT by Francis Younghusband OUP Hong Kong, £25 I n this magnificent account of his jour- neys through Central Asia in the last years of...

Christopher Howse STINIE: MURDER ON THE COMMON by Andrew Rose Bodley Head, £9.95 T here's nothing like a mysterious mur- der to spawn books. And the murder on Clapham Common in...

Mud lane descending, the lake squared-on to vision, crammed with early sail vanishing and reappearing beyond headlands. Diagonal white horses blown to a slurp at the foot of...

Less than half a character

Friday Morning (the poet again falls in love with his

wife) In Belfast all late drinkers know the Paramour's the place to go. At the window of bedroom fourteen, happy this morning as I've ever been with a book and a cigarette and...

History seen by a visionary poet

Lindsay Anderson PANDAEMONIUM: THE COMING OF THE MACHINE AS SEEN BY CONTEMPORARY OBSERVERS by Humphrey Jennings Deutsch, £9.95 (f12.95 in 1986) F or some of us — a comparative...

The exotic and the efficient

William Boyd THE SAVAGE WARS: BRITISH CAMPAIGNS IN AFRICA 1870-1920 by Lawrence James Hale, £14.95 r is anything but a romantic busi- Wa ness but, despite what we know about...

Playing safe Peter Phillips I s it my imagination, or are contributors to the Spectator becoming self-conscious? There seems to have been a rash of self- and cross-quotations...

Prizzi's Honour (`15', Odeon Haymarket) The Italian connections Peter Ackroyd J ack Nicholson is unmistakable: the eyes so peculiar that on occasions he resembles a blind...

Chatting with ETs Noel Malcolm A t their best, chat shows can be like a real-life game of consequences — albeit a rather inconsequential one. I couldn't resist Midweek last...

On gossip Taki I am seriously worried that I may be starting to take myself seriously. People who go around giving speeches usually do. My grand-daddy once told me that...

The crumpet season Alice Thomas Ellis W inter is coming. There's a nip in the air. The nights are drawing in. The leaves of brown are tumbling down, although belatedly. We...

Beloved baroque Jeffrey Bernard I have a friend, a musicologist called Clive Unger-Hamilton, a nice and precise chap in spite of a surname as unwieldy as a blunderbuss, who is...

Moulting porcupines P.J.Kavanagh A fter moving about from place to place it takes time to get your eye in when you finally come back home. It is always surprising that people...

N " THE Caprice is London's answer to La Coupole. The food is a hundred times better (whatever people say, you don't always eat best, or even well, in France) and the decor...

S ensational scenes in Moscow as Kas- parov wins game 19 to surge two games ahead. Karpov sealed his 42nd move open- ly and the crowd went berserk. The atmos- phere was so...

Herstory Jaspistos I . n Competition No. 1393 you were in- v ited to write a feminist account of some incident from the past in which male bias is redressed. The quaint book...

The future of Italian wines ITALIAN wines certainly have a past: the Romans called Italy 'oenotria tellus', which means the land of wine. It was also the Romans who brought the...

You are invited to write a poem (maximum 16 lines) on the advantages of pessimism. Entries to 'Competition No. 1396' by 15 November.

Solution to Crossword 729: Ladders The chain of anagrams progresses